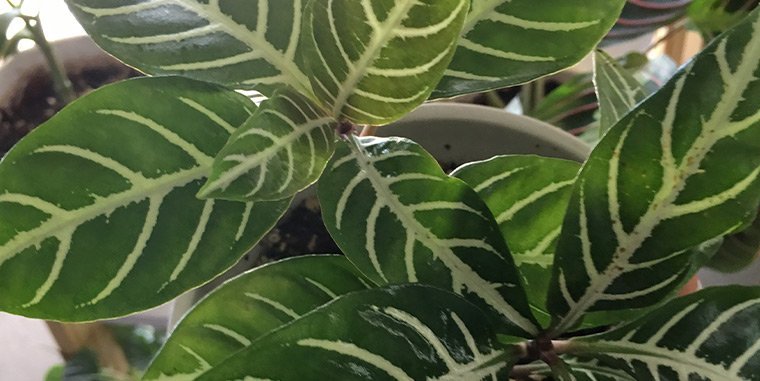 Aphelandra squarrosa, commonly the zebra plant, is a species from the Acanthaceae family, which is indigenous to Brazil and was classified in 1847 by botanist Christian von Esenbeck when he traveled to South America. Aphelandra refers to the anthers of the flower and squarrosa refers to the position of the bracts when mature.

This is a perennial evergreen shrub that can grow almost 6 feet high and 5 feet wide outdoors while indoor plants reach about 1 ½ foot tall. Its dark green glossy leaves can grow to 9 inches long and 2 inches wide with pointed tips and are veined boldly with white or yellow and, like zebra stripes. The yellow flowers form on bracts with a pleasant aroma that lasts just for a few days, although the bracts will remain eye-catching for up to 8 weeks.

Appropriate light, humidity, and temperature are required to get the plant to bloom, usually twice a year. Don’t let the soil become totally dry in winter when growth becomes dormant, watering less frequently than normal.

When new leaves appear, fertilize the plant with diluted fertilizer every fortnight. The plant must be moved to a brighter area and watered well in summer when it’s time for it to bloom. It will flower again when it grows in a brighter area for about three months as it will not flower when grown under low lighting conditions, although its striking leaves will more than make up for the lack of flowers.

The plant can thrive indoors for just a few years after flowering or permanently if it is propagated from cuttings.

This plant does well in plentiful, but not direct, light in warmer months. It usually doesn’t flower indoors, but extended exposure to light will induce flowering. It can tolerate less light exposure in winter when growth becomes dormant. Direct sunlight causes leaf burn, but total shade means that it won’t flower.

Keep the soil constantly damp and don’t let the soil become dry. It has to be watered once a week or more, but care should be taken as it is very tricky – too little or too much water will make lower leaves become brown and drop off.

It doesn’t like to stand in water even though it needs the soil to be damp, so water it frequently but not thoroughly. Waterless often in winter, just about making the soil barely wet, letting the top dry out in-between watering – enough to prevent leaves from wilting.

This plant requires humidity levels of 60-70%, although it will still grow at a low of 40%. Place pots on a base of water and gravel or keep them in a bathroom to meet its humidity requirements. If high humidity levels cannot be attained indoors a humidifier might be needed. Misting the leaves, but make sure to avoid letting water remain on the leaves. It should be away from drafts and vents.

The plant grows well in temperatures between 65 to 70°F and a low of around 60°F at night as long as it is not exposed to drafts. It will be adversely affected in lows below 54°F for extended periods, leading to yellow foliage or even death. It requires a range of 57 – 62℉ in winter if you want the plant to flower.

Zebra plants like rich soil that drains well, but yet still retains some moisture. A multi-purpose potting mix is suitable for the plant. Sand and gravel can also be mixed in to help with drainage and aeration.

Zebra plants require a pot about 6 inches in diameter since it doesn’t mind getting root-bound, although it can still be repotted with fresh soil. When the plant has flowered, prune it down to a pair of vigorous leaves before repotting in fresh soil as this will help encourage flowering. Old soil should also be carefully removed around the roots. This can often result in more shoots growing from the plant rather than just a single one.

That said, they don’t need repotting often, requiring a new pot every couple of three years. If you see a reduction of soil, just remove an inch or two from the top and add fresh soil, giving the plant a boost of nutrients.

New plants can be easily grown from 4-inch cuttings. Remove the leaves at the end and stick the cuttings into the soil or into the water until roots start forming. Rooting will begin in 6 to 8 weeks indicated by new leaves appearing. Cuttings will need high humidity to sprout robust roots, so growing them in a terrarium will help maintain humidity levels.

New plants can also be cultivated by air layering – remove the leaves in about 2 inches of a healthy stem, then cut about halfway into the stem. Keep the cut open by inserting a straw in the cut and cover the cut with rooting powder. Wrap wet moss around the cut and keep it in place with plastic film. Tie off the plastic to the stem to prevent moisture from escaping. Roots will begin to appear in a month or so, the stem can be cut off and potted in fresh soil, but make sure humidity is kept high until the plant is growing well.

It should be fed with an all-purpose liquid fertilizer once fortnightly during the warmer months. Don’t fertilize the plant in winter.

Dead flowers must be removed otherwise lower leaves might begin to wilt and drop off, leaving bare stems with just a few leaves at the tip. The stem and leaves can be pruned down when the bract dies, leaving just a couple of leaves at the foot of the plant – this helps to boost abundant new growth. Make sure the pruning shears are sharp and well-cleaned to prevent bacteria or fungus from attacking the plant. Cutaway yellow or dead leaves to encourage a healthy growing environment.

Wipe leaves frequently with a cloth to keep them free from dust and pests.

Crinkled or curled leaves are caused by the plant getting over-exposed to sunlight light. Under-watering and dry soil will cause leaf tips to wilt. This plant needs constantly moist, a challenging situation particularly in summer when the plant has to be kept under bright light. This also happens when plants get root-bound while growing in a heavy potting mix.

Lower leaves wilting and falling off can be due to under and over watering or too much fertilizing. Follow the recommended watering schedule and dilute the strength of fertilizer. Leaching the soil occasionally will help remove amassed salts by watering the plant several times and leaving it to drain out.

Whitefly infestation will cause yellow spots to appear on leaves. Cutaway infected leaves, wipe the leaves frequently, and spray them with a suitable pesticide until the infestation has disappeared.

Mealybugs can be removed with cotton swabs and alcohol or neem oil.

Aphids can be removed by spraying the plant extensively with water and insecticidal soap.

Lower leaves turning yellow in succession might indicate over-watering, but this also happens as the leaves get old, albeit slower.

Lack of aeration reduces oxygen reaching the roots, causing them to deteriorate in time and lead to root rot. Poke holes in the soil without causing damage to the roots and allow them to remain open for a couple of days before filling them with fresh soil. This will help add oxygen into the soil and reduce the possibility of root rot. Repeat this whenever you think the soil isn’t draining out fast enough.