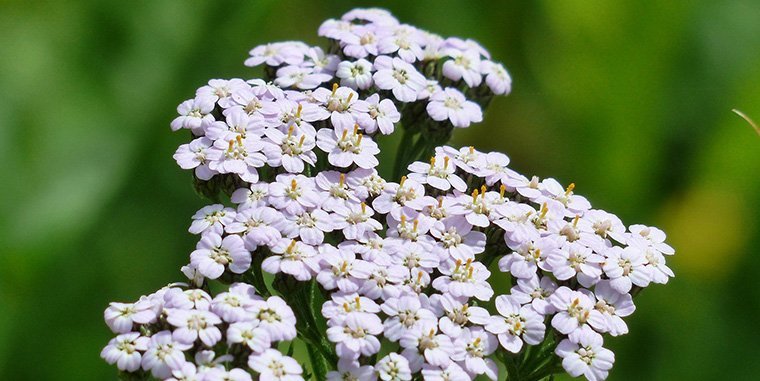 Achillea millefolium or yarrow, a flowering plant from the Asteraceae family, is indigenous to temperate areas in the Northern Hemisphere of Asia, Europe as well as North America. After it was introduced as a drought-tolerant pasture feed for sheep, goats, and cows in Australia and New Zealand, it became a common weed in dry and wet areas, including roadsides, fields, meadows, and coastal areas.

This perennial plant grows from altitudes of 11,500 feet to sea level and commonly blooms from May to July. It is an herbaceous plant, producing stems of 8–40 inches high and spread by multi-branched rhizomes.

The leaves are 2–8 inches long and equally distributed on the stem, with the largest located at the middle and lower end of the stem. They are almost feathery and grow spirally along the stems. The plants are found growing almost everywhere in California except the Mojave Colorado Deserts. It’s called plumajillo or “little feather” in Spanish in southern Colorado and New Mexico, due to the texture and shape of the leaf.

The flower heads are made from several small, tight clusters of flowers and come in several different colors like yellow, pink, red, purple, and other shades and have a sweet scent, similar to chrysanthemums.

The small fruits are one-seeded. It is deemed to be particularly useful in companion planting since it attracts beneficial insects who help in pollination and repels some pests. Ladybirds and hoverflies are also attracted to the plant. Predatory wasps visit the flowers for their nectar and then capture insect pests to feed their larvae.

This plant can be used to prevent soil erosion since it has deep roots and is very resistant to drought. It is excellent as a pasture crop since its leaves are rich in minerals, reducing mineral deficiencies in ruminants that feed on it.

This plant prefers growing under full sunlight, but it can also grow under partially shaded conditions. However, if it doesn’t get enough light, the long and thin stems can become droopy and will require staking.

Once the plant becomes established, it is very tolerant of drought, but it generally needs to be watered every week or more in hot summers.

This plant is very tolerant of a broad range of humidity including hot and humid conditions.

While this plant prefers cool weather and can thrive in a zone of 3 to 7, they also grow well in zones of 9 or 10 but can get leggy in warmer climates and need staking.

This plant grows well in well-draining soils, either sandy loams or sandy clay. It is also very tolerant of poor soils, as long as it is well-drained. Nutrient-rich soils will boost aggressive growth, so the plant should not be fertilized.

When repotting this plant, you should also prune it down a bit and divide the rhizomes before planting to reduce transplant shock. This plant grows up to 40 inches high and needs a large pot filled with moist soil to accommodate its growth. After repotting it, keep it in a shaded location and keep the soil damp but not soggy until new growth appears. It can then be moved to where it can get full sun.

This plant can be germinated from seeds about 8 or 10 weeks before spring begins. Use a starting mix to plant the seeds and keep them in a warm (64–75°F) and bright location. Light is required for germination, so just press the seed into the soil so it can’t move and don’t cover it. The seed will start germinating in about 10-14 days. Harden off the seedlings before transplanting them in your garden after any danger from frost has elapsed.

This plant must be divided once in 3-5 years for healthy growth. This can be done either in spring or autumn before it becomes dormant.

It is also propagated from cuttings. Take a 5-6 inch cutting from tender growth and remove all leaves, keeping just a few at the top. Dust it with rooting hormone and plant it into a pot of damp potting soil. Keep it in a warm, sunny spot and water it lightly to moisten the soil. Rooting will take around three weeks. Now it can be transferred to a pot or in your garden.

This plant is low-maintenance and doesn’t need feeding. Side-dressing the plant every year with compost will be enough. Fertilizing it or growing it in nutrient-rich soil will make the plant spread and become invasive.

It needs to be pruned before and after blooming to keep it compact and reduce its height. Deadheading will help keep the plant always blooming in season and will avoid self-seeding. You may have to wear gloves when pruning since some people can get allergic reactions when touching the plant.

Powdery Mildew causes white growths on leaves. Typically, this fungus appears in hot and arid weather. Remove any foliage that has powdery mildew and destroy it. You can also treat the plant with an appropriate fungicide. Some cultivators use baking soda as a preventative method. Improving air circulation around the plant will also help prevent the fungus from attacking the plant. Do not water the plant from above as this will spread the spores.

Rust is another fungal disease that begins under the leaves. This causes white, raised spots to appear on the foliage that later turns into red-orange spores, eventually becoming black. A severe infection could cause deformities, leading to leaf drop. Remove infected leaves and destroy plant debris. Copper sprays or sulfur powder will help treat this disease.

Spittlebug sometimes attacks these plants. It secretes a foam that looks like spit on the plant and protects the insect from UV rays, insecticides, and predators. Spray the insects with water to wash them off. These insects don’t usually do much damage and since the bubbles protect them, it’s better to avoid using any insecticides, which might harm the beneficial insects in the garden.