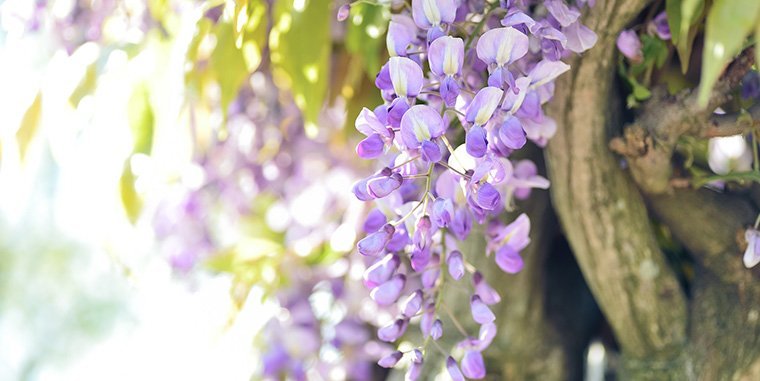 Wisteria, a genus of plants from the Fabaceae (Leguminosae) legume family, includes 10 species of popular flowering woody vines that are indigenous to Asia, North America and later introduced to Europe.

They are very similar and the only feature that differentiates them is their pods, Asian types are covered with fuzz and the pods are smooth with the American type.

The Chinese type (W. Sinensis) was introduced to the US in 1816 and the Japanese type (W. floribunda) was introduced in 1830. They are both considered invasive due to their hardiness and easy escape from gardens and overwhelm native plant species. If you cultivate either of the Asian types, you’ll have to devote a lot of time pruning them to keep them in check.

They can attain heights of more than 50 feet and spread 30 feet or more horizontally. The world’s largest flowering plant, a Chinese type planted in 1894 at Sierra Madre, California and now measures more than 43560 feet in size with a weight of around 250 tons. Another Chinese type is a 200-year-old specimen still growing at Fuller’s Griffin Brewery, Chiswick in the UK.

All plants in the genus are very hardy and grow rapidly. These plants are deciduous woody vines that are popularly cultivated for their attractive long flower clusters that grow about 6-12 inches long. The flowers come in shades of blue, purple, pink, and white. The fruits are bean-like pods and the leaves are feather-shaped with 9-19 leaflets.

The flowers usually bloom in spring, before or when the leaves appear in certain Asian species, and mid or late summer with the American varieties and W. japonica. The flowers of most species (particularly W. Sinensis) are fragrant. The larvae of certain butterflies and moths feed on these plants.

This plant can grow unsupported but is best allowed to climb up trees, pergolas, walls, or other supporting structures provided that the supports are very strong and sturdy.

Mature plants can be very strong, with heavy trunks and stems and damaged trees, and collapse flimsy structures with their weight. Plants that grow on houses can also damage roofs, gutters, and drainpipes.

These plants love growing in full sunshine. However, they can also be grown under partial shade, but this might result in fewer flowers. Ample sunlight is necessary for profuse flowering.

Water these plants deeply twice weekly during the first 2 or 3 months, reducing this frequency after that. Stick to a regular schedule, but increase watering in particularly hot summers, when soil generally dries out faster.

These plants can tolerate average to moderately high levels of humidity.

These plants are hardy and can handle low temperatures of -20 or -30°F and highs of 100°F in summer, although the leaves might wilt in very hot weather, the plants will recover at night.

Rich and well-drained soil is perfect for these vines, with acidic or neutral pH levels. Alkaline soil can make these plants chlorotic, where the leaves will not produce sufficient chlorophyll, causing them to become dull yellow.

They need repotting every two years into larger pots, Select a container with a wider top as this makes removing and repotting the plants easier. Trim the roots if necessary to help keep the plants manageable if you grow them indoors.

They can be propagated from hard- and soft-wood cuttings, or by seed; however, plants grown from seeds will take several years to flower so most cultivators generally use cuttings.

Choose either a hard-wood or soft-wood stem in spring or summer and cut a 4-inch long cutting just beneath a node – the cutting must have 2 sets of leaves and at least one node. Prepare a pot of fresh soil or soilless mix and insert the cutting into it.

Water it well and continue to keep the medium damp until new roots and shoots develop. Transplant the new plant into a large container or to a selected location in your garden. Plants growing outdoors will be difficult to relocate after a few years so keep that in mind when choosing where to plant them.

Propagation from seed requires temperatures of 65°F or warmer in spring. Soak the seed in tepid water overnight and sow it 1 inch deep in a damp soilless mix. Keep the soil moistened until the seed germinates. Water and care for the seedling twice weekly for 2 or 3 months, reducing it to once every week thereafter.

These plants fix nitrogen around their roots with help from Rhizobia bacteria, so just add potassium and phosphate in spring.

Remove diseased, dead, or damaged leaves or stems whenever spotted. Asian types require regular pruning to maintain their shape and restrict their spread, while the American type is less vigorous and needs less pruning.

Prune every year in two phases, prune away at least half of the previous year’s growth, but leave behind a few buds on the stems for flowering. Don’t prune down a mature plant too much as flowering might be affected since it will take some time to return to its optimal flowering routine.

Prune again when flowering has finished – this second phase is to improve the appearance of the plant by removing stray shoots and branches.

With its climbing ability and rapid growth, this plant can transform your garden as a beautiful shade cover when climbing on a pergola, arbor, and a strong trellis that allow the long flower clusters to hang freely and create a spectacular flower canopy.

In Japan, the plants are trained to grow on immense trellises to create flowering tunnels in spring. While you may want to let the plant coil around tree trunks, its formidable grip will strangle the tree eventually.

To get the same effect, train the plant to grow like a free-standing single-trunk tree by attaching the thick vine stem to a strong post or 4-by-4 beam securely buried in the ground. Remove unwanted growth on the trunk as it grows, only allowing the top portion to grow. You can use the same technique to cultivate the plant in large containers or as a small bonsai.

Once this plant is well-established, you will find it very difficult, even impossible, to move around. Before planting it outdoors, carefully select the planting location and how you want it to grow.

Mealybugs look like small bits of cotton and suck sap from plant tissue. They gather in colonies to attack the plant, they can make the plant weaken, turning leaves and soft stems yellow and causing leaf drops. They secrete honeydew ants love and cause fungal sooty mold to use a suitable pesticide to eliminate them and a fungicide to treat sooty mold.

Scale insects are similar to mealybugs and feed on sap. They have a shell that protects them and they look like tiny bumps underneath leaves. They cause similar damage as mealybugs and secrete honeydew as well. They are tough to control once they get well-established. Remove affected foliage and use neem oil to control these insects.

Fungi or bacteria cause black or brown leaf spots that are ragged or circular with yellow or water-soaked edges. It can be spread by insects, water, dirty tools, and even people. Remove affected leaves and rake up and dispose of leaves in the soil around the plant’s base. Avoid overhead watering – water the soil directly. Use a suitable fungicide to treat the plant if the leaf spots are caused by fungi.

Fertilizer that contains nitrogen or insufficient light can prevent flowering. Nitrogen directs energy towards the production of foliage and not flowers. However, if nitrogen or light isn’t the problem, prune the plant annually (if you’re not already doing so), including the roots.