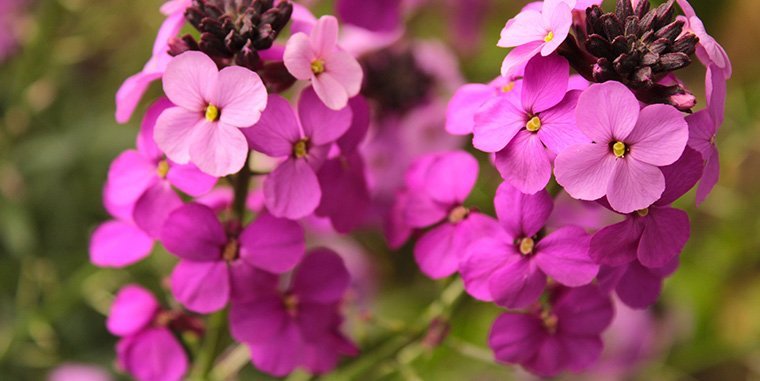 Wallflower (Erysimum) a genus of plants from the Brassicaceae or cabbage family includes more than 180 species consisting of wild forms and popular cultivars. These plants are related to cruciferous vegetables like cauliflower, broccoli, and kale.

They are largely low-maintenance plants to cultivate as annuals, perennials, or biennials, with some perennials usually grown as biennials since they are often plagued by bacterial and fungal diseases and are discarded after flowering.

They can attain heights between 1 – and 3 feet. Most varieties have erect stems with narrow leaves. The four-petalled flowers are produced in clusters of colors like yellow, white, orange, pink, maroon, purple, blue, and red in spring and summer.

Most biennials only produce flowers after one year of growth, often dying after flowering, sow biennial seeds in spring and transplant them in autumn.

Perennials ought to be planted between May – and September prune them occasionally to promote flowering and take cuttings to prepare for plant loss from the disease.

Most cultivars today were developed from E. cheiri. These hardy plants are attractive and fragrant and make colorful additions to grow in butterfly gardens, borders, containers, or rock gardens.

Wallflowers are frequently grown in garden beds alongside forget-me-nots, daffodils, and tulips; they get their common name from their habit of growing in between cracks in cement or brick walls.

These plants were used in traditional medicine for a long time, a fact that Pliny the Elder documented in his Naturalis Historia.

They must be grown in bright, sunny locations, although they can tolerate partial shade. Gardeners in northern areas should select locations that get direct sun, while gardeners in southern areas choose places with some shade in the afternoons to give the plants some respite from the intense southern sun. Plants that don’t get enough light will generally produce fewer flowers.

These plants are considered to be drought-tolerant and don’t require too much watering. They need regular watering when they are getting established, and reduce watering when they are mature they can survive on rainfall but need supplemental watering if rainfall isn’t frequent be careful – they do not tolerate growing in soggy soil so make sure they have good drainage and avoid growing them in wet areas in your garden.

These plants can easily adapt and tolerate both arid and humid growing conditions.

Well-draining, dry to medium-moist chalky or clayey or loamy, or sandy soil types is preferred by these plants. For best results, use fertile soil augmented with plenty of organic matter that can hold moisture and doesn’t become dry or waterlogged.

However, they can also tolerate poor soils if you add some general granular fertilizer when planting. Water-logged soil will make them die quickly.

Generally, biennial plants won’t require repotting since they have a short lifespan. However, potted perennials, particularly those growing in warm climates, have to be repotted when they outgrow their containers and become root-bound.

Transplant them in larger, well-draining containers filled with suitable soil. Growing potted perennials in colder areas is also possible provided they are brought indoors in winter, otherwise they will become biennial or annual plants. They make excellent potted plants because of their low-maintenance nature and don’t need too much watering.

When propagating from seed, you can either plant seeds directly in your garden or germinate them indoors, seeds are best planted in early spring or late fall. They need light for germination so make sure you provide them with adequate light if you start them indoors.

Sow the seeds and cover them with soil. Seeds started indoors can be transplanted after 2-3 leaves appear.

Perennials are sterile and rarely produce seeds. They are mainly grown from cuttings in summer. Take 3 or 4-inch long cuttings, cutting them away just under a node. Heel cuttings often provide better results – this is done by carefully pulling the cutting off the plant, leaving a “heel” or piece of stem attached at the base.

Remove all the leaves at the lowest end and insert them in pots of suitable soil up to the remaining leaves. Place the pots someplace warm, with sufficient indirect light to root. When the roots have taken and new foliage appears, you can either transplant them elsewhere or continue growing them in the pots.

These plants don’t require plenty of fertilizer to grow. The best option is to amend the soil with compost when you first plant them with an application of all-purpose fertilizer in spring and summer.

Consistent pruning helps these plants to thrive. They are best cut back once they finish flowering or in early spring. Prune them down to just 2 – 3 inches above the soil and dense new growth will emerge when temperatures turn warm again. Deadheading spent flowers is key to keeping the plants healthy and increasing flower production.

Since they belong to the Brassicaceae family, they are vulnerable to common garden pests that also plague their vegetable cousins. Pests like aphids, flea beetles, and cabbage worms can often attack the plants.

However, since they prefer dry growing conditions unlike their vegetable relatives, this accidentally helps prevent pest infestations. Another way to prevent diseases and pest infestations is to never reuse garden beds or containers where other Brassicaceae species were grown recently as insects or pathogens might linger in the soil.

Sometimes the plant might produce just a single flower on its long stems.

This can be due to nutrient deficiency from a buildup of excessive nitrogen and not enough potassium and phosphorus. Use a balanced fertilizer or one suitable for flowering plants.

Insufficient light also affects flower production, so if the plants are growing under too much shade, dig them up and move them to a better spot.