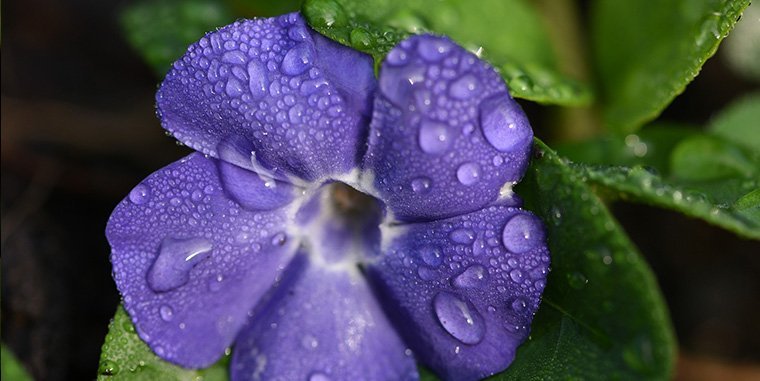 Vinca, a genus of plants from the Apocynaceae family, is indigenous to Europe, Africa, and Asia.

These plants are 3 – 6 inches tall and trailing vines that can reach about 18 inches long. The stems often take root when they touch the soil, enabling the plants to spread extensively.

The glossy evergreen leaves are broad lance-shaped to oval, 0.5 – 3.5 inches long, and 0.20 – 2.36 inches wide, with colors of plain green or variegated with yellow, cream, or white.

Four species are evergreen, with one deciduous species, V. herbacea, that die down to the roots in winter. V. herbacea produces dry fruit that splits open when ripe, while V. major produces elongated fruit that is frequently slightly curved and usually come in pairs. V. minor, however, doesn’t typically produce fruits or seeds and usually spreads by rhizomes. V. major (bigleaf periwinkle) is almost identical to V. minor (lesser periwinkle) but is bigger than V. minor.

The flowers, produced throughout most of their growing season, are simple about 1 – 3 inches broad, with five petals coming together in a tube at the base, coming in colors of purple, violet, blue or white.

These low-growing perennials, particularly V. major and V. minor, are extensively grown as ornamental ground covers in gardens, in containers and to prevent weeds in warmer temperate areas.

Traditionally, they were used in cemeteries as a maintenance-free evergreen ground cover. Several cultivars with different colors of leaves and flowers are now available. They are frequently used in flower arrangements around the US.

It is important to choose the right species for your garden since V. major is very vigorous and often becomes invasive. While it is fine when planted in stony or poor soil, it frequently becomes a problem when planted in borders alongside other plants. The long stems easily take root wherever they touch the soil and can rapidly grow in between other plants, becoming hard to remove later.

V. minor is usually a more popular pick by gardeners as, although it can be invasive as well as V. major, it spreads slower and forms a nice carpet of greenery that looks nice all through the year and prevents weeds. Space the plants between 12 – and 20 inches apart, dependent on their size when purchased and how fast you want a ground cover.

While both V. major and V. minor are attractive plants, they might be invasive in some areas where they have been introduced since their rapid spread often blocks native plants and alters their habitats. Places affected include areas of Canada, the United States, particularly coastal California, Australia, and New Zealand.

They are best planted in spring or fall if possible if you have poor soil, amend it by mixing in well-rotted compost. If you’re planting them in summer, keep watering them until they are established, particularly in dry spells.

They grow well in all conditions, from full sunlight to shade but flower better in better lighting. Since they also thrive in shade, they are suitable to grow under shrubs or trees. They might need some shade from direct sunlight when planted in areas with hot summers.

Though these plants thrive better in moist conditions, they are very drought-tolerant once they get established.

They prefer average to moderately humid conditions while they are a tough species, several diseases can affect them, particularly in humid climates.

They thrive well in temperatures between 75 – 100°F in the day and nighttime temperatures of 68 – 75°F, although they are hardy plants that can tolerate a varied range of temperature.

However, they cannot tolerate frost and should be brought indoors when temperatures drop down below 50°F.

They need well-draining soil rich in compost, although they can tolerate poor soil. They can grow in any soil type but in very dry or soggy soil.

These plants should only be repotted if they become root-bound, repotting is better done in spring or fall when the weather is cool.

Choose a large container with good drainage capacity and fill 1/3 of it with suitable soil, remove the root-bound plant from its home, easing off any old soil, and transfer it into the new container. Water it well after adding more soil.

A few species can be propagated from seed, but it takes time for the plants to mature. You can use naturally rooted stems or divide established plants – these last two methods are the quickest way to grow new plants.

Since these plants are invasive, take advantage of that. Inspect the plant for any stems that have rooted when they came in contact with the soil and cut them away, leaving a cutting with ready-made roots. Simply plant the cuttings in suitable soil in your garden or containers and your mission is accomplished.

Dividing the plant is easy, dig up the chosen plant and lift it out – they have rather shallow roots and you won’t have to dig very deep, separate the plant, each new section having a set of stems attached to roots. Plant the new divisions at the level they were previously growing and water thoroughly.

Feeding these plants with a balanced fertilizer every month will give them a boost, turning the foliage more brilliant, and might even help them produce more blooms. This will help but isn’t necessary since they grow well in poor soil as well.

Be careful though – they can grow very vigorously and aggressively overpower other plants growing nearby. If this becomes a problem, you must prune back long stems once a year at least to control unwanted spread.

Since these plants are quite robust, they rarely suffer from attacks by pests or disease, even slugs usually avoid these plants. Occasional attacks by pests like aphids, whitefly, spider mites, and scale have been observed. Neem oil and/or insecticidal soap will help control any such infestations.

However, when they grow in unfavorable conditions, a few diseases like rusts, leaf spots, root rot, stem canker, and stem rot might attack them, remove infected portions, and water them properly. Good air circulation is necessary to prevent disease.

Stem canker, however, is a disease that can potentially be deadly and this infection is almost always widespread in very rainy periods. The shoot tips become dark brown, changing to almost black as the infection progresses.

Sometimes, this might get so bad that the plants can fail and have to be destroyed. Newer plants, when haven’t become well established, are particularly vulnerable. However, this disease will taper off in hot dry summers, although new infections can set in if the plants experience new prolonged periods of wet weather.