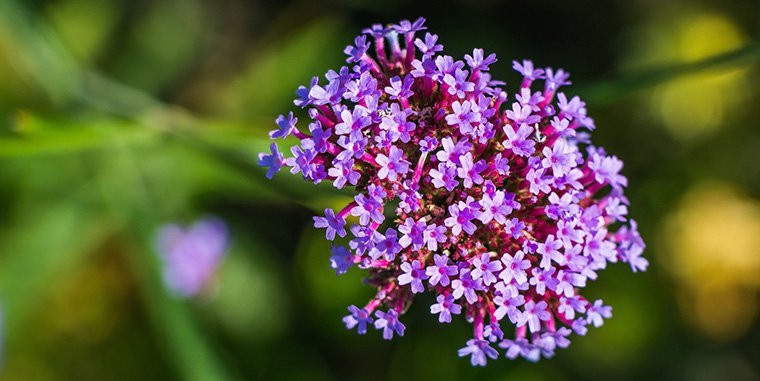 Verbena, a species of perennial and annual flowering plants, is a genus belonging to the Verbenaceae family. It consists of about 150 varieties of herbaceous or semi-woody plants. The majority of these species are indigenous to Asia and both North and South Americas and, while Verbena Officinalis is a species indigenous to Europe but is derived from North America.

These plants can grow 12 inches tall with an 18-inch spread, but this depends on the variety. The leaves are often dense and hairy in many species. The small long-lasting flowers have five petals and grow on dense spikes. They usually come in colors of blue, but can also be purple, pink, or white, particularly in cultivars developed by gardeners and horticulturists.

Some species, including hybrids and cultivars, are easily cultivated as ornamental plants as well as for essential oil extraction. They are resistant to drought, can tolerate full and partial sun, and thrive in well-drained soil. However, some varieties and hybrids are not as hardy and are generally cultivated as annuals in garden beds in landscaping schemes. These plants are usually propagated from seed.

They are popularly grown in butterfly gardens, attracting butterflies and moths including Hummingbird hawk-moths, the Pipevine swallowtails, Chocolate albatross as well as hummingbirds, particularly the V. officinalis variety, which is also cultivated to attract honeybees. In ancient times, these plants were popular for their supposedly healing qualities, while alternative medicine practitioners have been promoting these same qualities. However, modern scientific studies have not found evidence to substantiate these claims.

Historically, these plants have long been associated by ancient cultures with the divine and the supernatural. Ancient Egyptians called the plant “tears of Isis” and “Hera’s tears”. Ancient Greeks devoted the plant to Eos Erigineia. Ancient Romans used the plant to honor Jupiter.

These plants thrive under the full sun but can also grow under partial shade. However, flowering will be greatly reduced when they grow in shady locations. They require 8-10 hours of bright sun every day to produce bountiful blooms. Plants growing in low light conditions become stretched and leggy and produce fewer branches.

Keep these plants regularly watered every week until they become mature. Once they are mature, watering should be reduced as they can tolerate a few days of drought. Watering schedules should be monitored as too little water attracts spider mites while too much water can make the soil soggy and attract botrytis blight that can kill the plants. Do think of using reduced watering to control plant growth as this might lead to wilting and leaf drop.

These plants can tolerate humidity levels of 50-85% or higher.

These plants like any type of soil that is rather dry soil that is in the acidic range and well-draining. Heavy clay soils tend to retain moisture and initiate root rot, so add plenty of compost or hummus to aerate and lighten the soil.

Since these plants generally are short-lived, repotting is seldom necessary. Seedlings can be transplanted into hanging baskets or regular pots. Use a peat-based general-purpose soil mix, in well-draining containers. Plants growing in the ground can also be dug up and repotted and brought inside for overwintering.

These plants should be replaced after two or three years as they don’t live very long. While some varieties can reseed themselves in the garden, you should plan ahead and germinate seeds to perpetuate the plants. You can divide these plants for propagation when the root clumps are still dormant in spring before new growth occurs.

The seeds are easy to germinate and can either be collected or purchased from garden centers. Plants that self-seed in your garden usually grow true like the parent plants.

The seeds must be soaked in water prior to planting for 24 hours. Plant them in seed-starter trays filled with peat-based starting mix, gently pressing them into the mix. Sprinkle soil or peat moss to lightly cover the seeds. The seeds need darkness for germination so cover them with newspaper. Once the seedlings sprout, uncover them and continue growing them in the tray, lightly moistening the soil until a few leaves form. They can now be transplanted in to your garden or into pots.

These plants aren’t heavy feeders, but they will appreciate a regular monthly application of slow-releasing balanced flower fertilizer. This will give them the nutrients to keep flowering, which normally lasts from spring until late fall.

In autumn, they can be lightly trimmed back to give your garden a neater look, but don’t do any severe pruning until spring when new growth starts appearing. Severe pruning in autumn will affect their cold hardiness and they might not survive winter.

These plants generally are very hardy but can suffer from an assortment of problems, mostly from being grown under low light, poorly draining soil, or when too much over-watering saturates the soil. Poor ventilation and overcrowded environments can also create problems from diseases.

Powdery mildew coats leaf surfaces with a white powder-like coating. High humidity or ventilation problems or insufficient light sunlight or stress from severe drought or watering issues can attract the fungus. Remove infected foliage and identify the problem to resolve it. Use a suitable fungicide to treat the plant.

Botrytis blight often plagues the plant in moist soil conditions, making the flowers become brown and often appear as a gray, fuzzy fungal growth. Use an appropriate fungicide to treat the plant, but the plant might have to be destroyed in severe cases.

Similarly, root rot might occur in over-watered soil. This is either caused by Rhizoctonia or Pythium. Severe infection might even kill the plant. Inspect the roots and remove diseased/damaged roots and repot in fresh soil.

These plants can also be attacked by aphids, leaf miners, whitefly, mites, and thrips. Use insecticidal soap or neem oil to rid the plant of these pests.