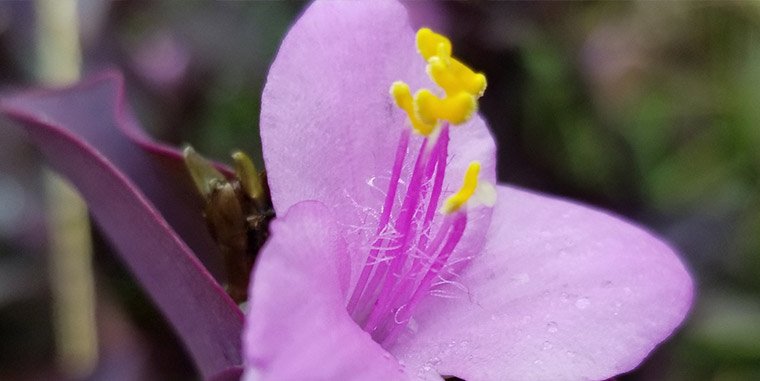 Tradescantia pallida (Setcreasea pallida) or Purple Heart is an evergreen species of spiderwort and is indigenous to northeast Mexico. It was named by Joseph Nelson Rose as setcreasea pallida in 1911, later reclassified into the Tradescantia genus by D.R. Hunt in 1975. It’s a low-growing plant and is widely cultivated in colder climates.

This plant is a trailing perennial with variegated lance-shaped purple-violet leaves up to 7 inches long and purple stems. Fine hair covers the leaves and forms sheaths around the stem. The stems are very fragile and easily break off. The foliage usually dies in the cold months of winter, but new growth sprouts from the roots in spring.

This plant grows around 8-12 inches high but spreads wider. This plant is grown mainly for its foliage, although it does produce pink three-petal flowers without fragrance in the warmer months. It is doing well when grown as a groundcover or indoors in containers or hanging baskets and spreads rapidly.

It is considered to be very efficient in improving air quality by filtering volatile compounds from the air.

This plant loves to be grown in bright light throughout the year to maintain good foliage color. It can grow in lower light conditions, but the foliage will tend to be green rather than purple. Protect it from the hot sun at noon during summer to avoid leaf burn. Long gaps between leaves will indicate that the plant needs more bright light.

Water the plant meticulously, then water only after the topsoil is allowed to dry. It needs less watering in winter when its growth is slower. Avoid over-watering as it can get water-logged, leading to root rot. However, this is a very hardy, drought-tolerant plant and tends to thrive on neglect so forgetting to water it on occasion is not a big problem.

It should be ideally watered around the root zone to prevent the leaves from getting wet and encouraging the growth of mold and disease that will damage or weaken plants. Using a soaker hose to water the plant will keep the plant healthy and thriving as well as reducing water loss from evaporation is a good idea. If it is grown outdoors as ground cover in a big area, a sprinkler might be necessary so water it in the morning to allow the foliage of the plant enough time to dry out during the day.

As mentioned above, this is a very tolerant plant and will thrive in average room humidity levels of 40%, arid environments will make leaf tips brown.

It will do well in average to warmer room temperatures between 65-80°F throughout the year, it can survive low temperatures of 10-20°F – this may result in foliage dying off but don’t worry, new growth will appear from the roots when the weather becomes warm.

It grows well in rich, well-drained soil. A moss-based mix, such as that for African violets is ideal. You can improve regular garden soil by adding organic material such as moss or compost or you can add a small amount of sand if the soil is very rich.

Repot as needed every couple of years to freshen the soil, or when roots are growing out of drainage holes. Transfer it to a container a little bit larger to give it a little space to grow. The pot should have sufficient draining capacity to prevent waterlogged soil, which can lead to root rot. You can use a decorative planter as a cachepot filled with a layer of pebbles to lift the pot above the water.

Propagating this plant is foolproof and very easy as the plant habitually sends out roots at almost every leaf node. Take 2- 3-inch long cuttings and insert them into a soil mix or water. Once the root form and new growth appear, transplant it to an appropriate container/pot filled with the right soil mix and water it well.

While it is not considered an invasive species, the relative ease of propagating itself can make it appear as one – a bit of stem that is accidentally broken off can turn into new plants if inserted in the soil!

Feed the plant once a month throughout its active growing period from April – October, a regular dry/liquid fertilizer can be used following the guidelines provided, and always water the plant immediately afterward. Don’t feed it in the winter, resuming when spring comes and new growth appears.

Care should be taken not to over-fertilize the plant as it can suffer damage. Follow the recommended instructions to regulate how often and how much it should be fed but, as mentioned above, once-monthly is good enough for this plant.

This plant should be pruned to cut back on growth to control and maintain its desired shape and size. Pinching off tips will stimulate bushy and dense new growth and help it produce more flowers.

Old flowers should be pruned to prevent seed production as well as keeping the plant looking healthy. Seed production will drain the plant’s energy and stop it from producing new flowers. Since this plant is generally grown for its lovely foliage, you can pinch off flower buds to save it from expending energy if you want to.

This plant doesn’t suffer from any severe insect or disease problems but can be attacked occasionally by scale, mealybugs, caterpillars and snails can damage the plant when it grows outdoors.

Caterpillars and snails can be removed manually and prevented from coming near the plant by adding a layer of gravel or diatomaceous earth around the roots of the plant while scale and mealybugs can be eliminated using cotton swabs or a brush drenched with rubbing alcohol and/or appropriate pesticide. Repeat frequently until no new eggs hatch and remove any infested/damaged leaves.