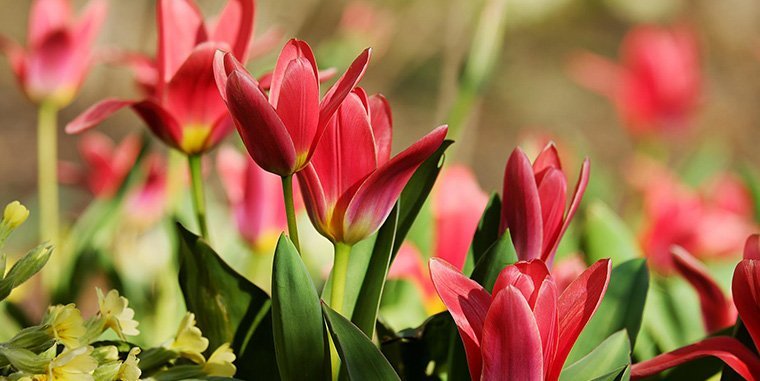 The Tulip (Tulipa), is from the Liliaceae family, with about 75 species divided among 4 subgenera because of the variability within their populations, including a lengthy history of cultivation, classifying them has been controversial and complex.

These plants are originally from Central Asia and Southern Europe but are now naturalized and cultivated since the 1600s in many areas. They are naturally adapted to growing in mountainous regions with temperate climates and thrive in climates with long seasons of cool spring with dry summers.

They are commonly found growing in meadows, chaparral, and steppes, but have also been introduced in orchards, fields, roadsides, and gardens. Cultivation of these plants began in Iran around the 10th century and in 1055 in Constantinople.

These bulbiferous perennials can range in heights between 9 – 24 inches with a spread of 6 – 9 inches. They have 2 – 6 broad, strap-like leaves covered with a wax-like coating making them blue-green.

The flowers grow on the tip of a single stem that arises between the basal leaf rosette. Most plants have a single flower growing on each stem, but some produce multiple flowers.

The flowers are generally cup-shaped, having three petals with three sepals, but there’s a wide variety, some with fringed, ruffled, and double flowers that appear more like peonies rather than tulips. The large flowers come in almost every color except true blue and are generally unscented.

The leathery globular fruit contains several disc-shaped flat seeds in 2 rows of each chamber. Breeding programs have created thousands of hybrids and cultivars including those of the original species and are distributed among the 15 official classifications by the time of flowering, flower shape, and height.

These plants are propagated from offsets and seeds, although seeds are frequently used for propagating species or to create hybrids. Many species often cross-pollinate and create hybrid populations but most commercial cultivars are hybrids and frequently sterile.

In most areas, the bulbs are usually planted in fall, as they need a winter chill to start blooming in spring. Once growth emerges, they grow and flower rapidly in climates with cold winters, they normally emerge in March, with their flowering season beginning from April to May.

The plant usually dies back to its bulbs after flowering although these plants are perennials, many hybrids are rather short-lived. Maintaining a huge display involves planting extra bulbs every fall to produce a brilliant display in spring.

By the 1400s, they became highly valued and became the Ottoman Empire’s symbol despite their popularity in the west and central Asia, the western world was unaware of these plants until the 1500s, when Western diplomats reported about them from the Ottoman court.

Carolus Clusius introduced these plants at the Viennese Botanical Gardens in 1573 where he was perfect he continued working on these plants, making notes of the variations of flower colors.

He introduced tulips at Leiden University when he was director and also grew them in his garden in late 1593. Accordingly, 1594 is considered to be the year when tulips first flowered in the Netherlands, although there were reports of these plants being cultivated in private gardens of Antwerp and Amsterdam a few years earlier.

The first tulips believed to be grown in the US were planted on Richard Sullivan Fay’s estate in Massachusetts, who imported and planted several trees and plants from all over from 1847 to 1865.

They are widely popular, both as cut flowers and ornamental plants. Tulips were depicted frequently in Dutch paintings, with the Netherlands becoming the main producer and exporter of tulip plants, producing almost 3 billion bulbs every year.

Tulip festivals are often held in many countries like the Netherlands, England, Switzerland, the US, Canada, and Australia.

These plants prefer full sun, planting them under deciduous trees is a good location since they will have shade in summer and be exposed to the sun in spring before the trees produce new leaves.

Water the bulbs well when planting them and only water them in dry spells. If your garden gets rain every week or so, it won’t be supplemental watering; however, in arid regions, water them once every 14 days. Over-watering will make the bulbs rot.

These plants grow better in arid climates instead of humid climates since high humidity during their growing period is associated with lots of rain in spring and summer and can make the bulbs rot.

They thrive in areas with cool or cold winters and warm, dry summers in zones 3 – 8. They need 12 – 14 weeks under 55°F to flower, so they should be grown as annuals in areas with warm winters after the bulbs are chilled before planting.

They prefer rich soil with good drainage and a neutral to somewhat acidic pH. Adding compost can provide nutrients and improve drainage. Ideally, this should be done at planting time.

They are easy to cultivate in well-draining containers and only need repotting if they get over-crowded from offshoot growth. Prepare a new container filled with potting soil, tip the plant out from the old container, move it into the new one, and water thoroughly.

While they can be grown from seed, new plants often take 5 to 8 years before they will start flowering. Dividing offsets is the usual way to propagate them.

This is better done in fall when bulbs are usually planted, offsets will take one year or more of growing before they are big enough to start flowering.

As mentioned this is not a common practice since they grow slowly and seeds from hybrids generally don’t grow true to the parent plant.

Regular species plants will grow true if you harvest and plant seeds from the pods produced when the flowers fade. It takes time to care for the new plants until the bulbs form and the plants begin flowering.

After gathering the seeds, store them in a refrigerator for 12 – 14 weeks, then plant them in small pots filled with soil. In cold winter areas, seeds are generally planted indoors in February.

Cover the seeds with a light sprinkle of soil, move the pots to a bright area and keep watering until germination. They can be moved outdoors once the weather turns warm keep them growing in the containers until fall, feeding them every week with a diluted dose of balanced fertilizer to help the bulbous roots develop.

In late autumn, move the pots into your refrigerator for 12 weeks after this chilling period is finished, bring them back outdoors to grow again. Once the foliage has fully developed, the plants can now be transplanted into permanent garden locations.

The division is best done every 3 – 4 years in late summer/ early fall. Dig the bulbs up and brush or wash off the soil,gently detach the offsets from the mother.

Inspect and discard offsets that are soft or deformed. Replant with the pointed sides facing up, spaced 4 – 6 inches from each other planting depth should be 4 – 8 inches, with larger bulbs requiring deeper holes. The offsets only produce foliage for two years and start flowering in their third year.

Add bone meal, compost, or granular fertilizer when you first plant the bulbs. Feed them next spring, when foliage sprouts again.

Usually, flowers and stems are topped off by growers to increase the growth and size of offsets. When growing them as perennials, remove the flower stalks after they flower to stop the plants from growing seed pods, which can drain energy and shorten bulb life. Leaving the foliage to grow until it dies will help replenish bulb vigor and energy.

When growing them under cold winter climates, they don’t require winter protection, but withholding/reducing watering in fall will help prevent bulb rot.

The bulbs and leaves can be attacked by deer, squirrels, and rodents. Better grow them in containers or use deterrents or companion plants alongside daffodils or other plants that are not popular with animal nibblers still, expect to lose some bulbs and plants.

Examine the bulbs for decay. A short two-minute dip in 120° water can kill mites, thrips can be dealt with by placing sticky traps near the plants. Damage from thrips appears as silver or brown streaks on the foliage.

They are vulnerable to fire fungus and basal rot. Fire fungus deforms or stunts plants, sometimes preventing growth. Infected plants might develop and have curling foliage or dead zones surrounded by dark green rings. Treat the foliage and bulbs with fungicide and discard any affected bulbs.

Basal rot creates dark brown spots or pink/white fungus on bulbs. Plants growing from infected bulbs might be deformed and even die early; the only remedy is to treat new bulbs using fungicide before planting and dispose of any affected bulbs.

Mature bulbs reliably bloom in spring when conditions are suitable — fertile, well-draining soil and plenty of suns. If they fail to flower, it’s typically due to any one of these reasons:

Bulbs are not mature – particularly after dividing, the small offsets take time to start flowering. Feeding will help speed up their development.

Bulbs are old – hybrids are rather short-lived when flowering starts to decline, dig them out and divide the offsets and replant.

Not enough sunlight – these plants love the spring sun, so don’t grow them near walls, fences, or trees that cast shade.

Bulbs are under-fed – they do not need heavy feeding, but they do need a good dose of fertilizer when planting and every subsequent spring.