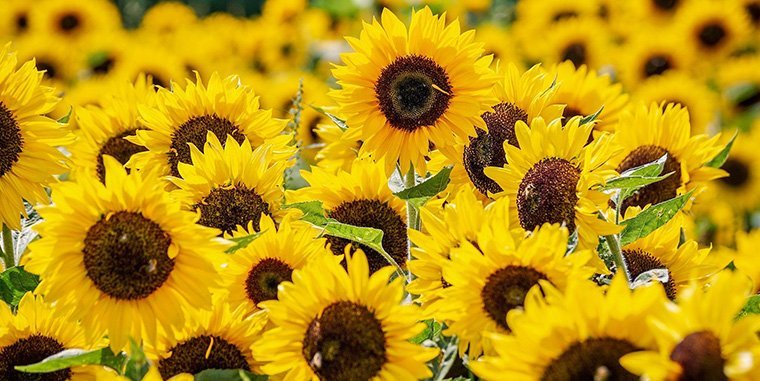 The sunflower or Helianthus belongs in a genus of about 70 different species of flowering perennial and annual plants in the Asteraceae daisy family. While there are three South American varieties, most Helianthus species are indigenous to Mexico and North America.

The name “sunflower” refers specifically to H. annuus, the popular species, whose round flowers resemble the sun. This species is mostly cultivated in temperate and some tropical areas as a food crop for humans, animals, and ornamentals. H. annuus usually grows during summer and early autumn, with a peak growth period of midsummer.

Several species are cultivated in gardens but tend to spread rapidly, becoming aggressive and crowding out other plants, while the whorled sunflower (H. verticillatus) is protected by the US Endangered Species Act in 2014.

Industrial forestry and plantations in Georgia, Alabama, and Tennessee are its primary threats. They grow 6 feet tall and are mainly found growing in woodlands, near creeks, and damp, prairie-like areas.

They were first cultivated and domesticated around 3000–5000 years ago as a crop in North and Central America by Native Americans. Sunflower seeds dating as old as 2100 BCE have been discovered in old human settlements in Mexico and the US.

In the early 1500s, European explorers introduced the crop seeds to Europe, which then ended up in Russia with oilseed cultivators. They developed and cultivated the plants on a commercial scale and then the process was introduced in the 1950s to North America. Commercial sunflower production and breeding in North America began and new varieties of the species developed by selective breeding began to be widely cultivated in several areas.

These annual or perennial plants are usually tall, growing to 10 feet in some species, producing one or more blooms or flower-heads. The “flower” is a disc of tiny flowers forming a large false flower to attract pollinators. Most varieties produce yellow flowers, although there are other varieties with colors of purple, orange, and red.

Young plants move during the day and follow the sun to increase photosynthesis from more sunlight. This process continues as they grow and when the flowers start blooming, with young sunflowers’ heads following the sun. This is considered as a way to attract pollinators since many insects are attracted to warmer flowers.

The flowers usually stop moving when they mature and then face east for the early morning sun. The rough, hairy stem is developed in upper branches in wild plants but seldom does with domesticated cultivars. The growth of the plant depends on its genetic background and makeup, in addition to the time of planting.

An intercropping system of cultivating soybeans and sunflowers was developed in Brazil – sunflowers are first planted, followed by soybeans. Sunflowers are generally planted in the northern or southern areas of the country, usually at the start of the rainy season, with soybeans then planted in summer.

The sunflowers benefit from nitrogen fixation from the soybeans, erosion control, and improved organic matter content in the soil. Researchers have determined that this method of planting can be further improved by also changing fertilizer use. This intercropping system has had a good environmental impact in areas where this is conducted.

These plants are excellent for attracting honey bees and insects that feed on and control parasitic pests that might be harmful to the plants.

These plants thrive best under full sunlight, with daily exposure of six hours. Because these are heliotropic and follow the sun, this will help the plants grow straight and not bend towards the light.

While they tolerate dry conditions, they will not flower in spells of drought. Regular watering once weekly helps them to bloom. If plants are drooping along with dry soil, that’s often an indication that they need watering.

These plants can tolerate high humidity along with well-drained soil and plenty of air circulation to avoid root rot and other diseases.

They prefer growing in temperatures between 70-78°F, although they can tolerate higher temperatures so long as they are watered well. They can also handle somewhat colder but bright environments.

They can grow in almost any kind of soil, even tolerating poor or dry soils. However, they will grow better in rich, organic, well-drained soil.

Sow seeds directly in pots filled with damp, good quality soil, spaced about 4-5 inches apart and 1/2 inch deep. After the seeds sprout and reach 12 inches tall, they can be transplanted to bigger 12-18 inches deep pots, ensuring they are evenly spread out or directly planted in your garden and water regularly.

While these plants can also be propagated by cuttings, the easiest method is by collecting seeds and planting them in the following spring. After the flowers mature, the flower heads will face downward and shrivel up. The only way to know if the seeds are mature is to open a few of the plump kernels, then they are ready for harvesting.

Cut off the entire flower head, leaving about a foot of stem still attached, and hang it somewhere warm, dry, and ventilated, out of reach of insects and/or rodents. Cover the heads with a paper bag or cloth to retain loose seeds and poke holes in either for ventilation. The seeds can easily be removed and collected when the flower head is completely dry. Select a few of the largest, fattest seeds – these have a better best chance of germinating and store under cool, dry conditions until spring.

You can let the flower heads remain on the stalks if you want to provide birds with food in winter and they will self-seed and grow in spring. These can be thinned down to establish space for a new set of plants.

Seeds can either be planted in your garden once the winter is done, or you can start them indoors before transplanting them into your garden. Coco peat or paper pots that can be directly planted into the soil are recommended since these plants don’t like having their roots disturbed.

Plant the seeds about 1-2 inches into the soil and spaced 6 inches from one another. Keep them slightly moist until they germinate in about 7-10 days. Taller varieties must be thinned out leaving 12 or 18 inches of space in between, while dwarf varieties can be about 12 inches apart.

The central stem usually isn’t viable for propagation, so it’s better to take cuttings from more succulent and vigorous side shoots. Select a 4 or 6 inches long cutting with mature leaves without flowers or buds. Take the cutting close to the plant stem and remove the lowest pair of leaves to expose the nodes. Also, cut off about 1/2 inch of the top and leave just two leaves without any flower buds.

Plant it in a mix of sand and moss with the lower part of the stem under the surface. Move the cutting to a warm, slightly shaded location and keep the soil lightly moistened. Humidity helps with rooting, so if the location isn’t humid enough, cover the pot using a large plastic bag. Rooting should start in 2-4 weeks.

Keep the soil slightly dampened, allowing it to become dry between watering to prevent fungal/bacterial growth. The cutting can be transplanted once it can withstand 6 hours of direct sun without wilting.

If the plant is growing in rich organic soil, it might not need to be fed with fertilizer. However, if the soil is poor, feed the plant with a fertilizer high in potassium and phosphorus to help it set flowers. Don’t over-fertilize the plant, as the stalks will become gangly.

This plant can be plagued by many pests and diseases if incorrectly maintained, including rodents and birds that love to eat the seeds. Protect the flower heads by covering them with a net. The sunflower moth larvae, beetles, and/or caterpillars also like to feed on the flowers and foliage – pesticides can help control and prevent these pests. Diseases such as rust and powdery mildew can also affect the plant – to prevent these diseases, provide the plant with proper air circulation and apply a fungicide when you spot signs of infection.

Leaf blight causes dark brown lesions surrounded by yellow on leaves. These lesions can coalesce, resulting in leaf drop and death. This disease emerges in hot and humid/moist conditions and can also be transmitted by infected seeds. Prune away infected leaves, space the plants properly to reduce humidity, and promote better air circulation. Suitable foliar fungicide will control the disease.

Downy mildew appears as white cotton-like growth on leaf undersides and causes stunted growth and reduces seed production. This disease also emerges in hot and humid/moist conditions and can survive in the soil for years. Use seed varieties developed to resist downy mildew and treat the seeds with appropriate fungicide before planting. Foliar fungicides aren’t effective in controlling the disease and are generally not recommended.

Phoma blight causes big black lesions on stems and spreads to form large areas of blackened tissue, also affecting the leaves and flowers and can make flowers die. Infected plants die early and produce little or no seed. The disease often infects plants in circular patterns in field crops. This disease also emerges in hot and humid/moist conditions and can survive in seeds or plant debris on the ground. Plant hybrid varieties that are more disease-tolerant and control stem weevils in fields.

Powdery mildew causes powdery white patches to appear on lower leaves but can spread to the whole plant. These patches turn gray/black and infected leaves will become yellow and shrivel. This often occurs in high humidity.

Space the plants properly to reduce humidity and promote better air circulation and ensure the plant gets full sun throughout the day. Apply appropriate foliar fungicide to control the disease – be careful as seeds treated with some fungicides cannot be used for food or animal feed and destroy the plant after the harvest.

Septoria leaf spot makes water-soaked spots appear on leaves. These lesions are generally gray with dark or narrow yellow margins. Little is known about how the pathogen survives and spreads other than the spores are thought to be spread by wet leaves splashed by water, with the disease rapidly spreading in warm weather and high rainfall. Plant quality seeds that are disease-free. Plant different crops for 3 years, particularly if overhead irrigation is being used – this applies only for large-scale cultivation. Fungicides are rarely effective in treating Septoria leaf spot

Verticillium wilt causes lower leaves to develop a mottled appearance. Leaf tissue becomes yellow and brown, with infected leaves wilting, shriveling, and eventually dying. The stems of the plant might turn black near the soil, with the internal vascular system also becoming black. This fungus infects the plant by the root system. It can spread to other plants by contaminated water or infected soil. Plant good quality seeds that are disease-free and avoid planting in fields previously infested with the fungus.