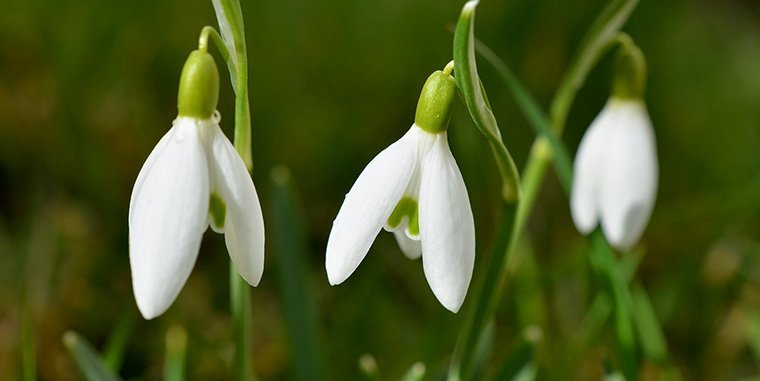 Galanthus nivalis or snowdrop, is the better-known and most extensive among the 20 species from its genus, Galanthus and is indigenous Eurasia but has introduced and become naturalized in several other places like eastern North America These plants are some of the first to flower in spring and form striking carpets of white in places they are native or naturalized. It is found at 300-4500 feet above sea level (although it is ordinarily found growing at 900-2000 feet). These plants are winter hardy in zones of 3 to 7 and are a plant best grown in cooler climates.

Carl Linnaeus gave the genus the name Galanthus in 1735 and later described this particular species in Species Plantarum that was published in 1753, with the word nivalis meaning “snowy” denoting the snowy flower. Its common name (snowdrop) first appeared in John Gerard’s edition of Great Herball in 1633.

While it is often considered a native British wildflower or introduced by the Romans when they invaded Britain, some now think it was introduced later, probably around the early 1500s. Many gardens in the UK and Ireland open in February and attract large numbers of visitors to appreciate the beautiful display of these flowers.

This perennial, herbaceous plant grows just as high as 3–6 inches and blooms in late winter to spring in northern temperate zones. This plant grows from bulbs, with each bulb normally producing two lance-like 4-inch-long grey-green leaves, with an erect flowering stalk bearing a bell-shaped white bloom that hangs down from its stalk.

The flower has 3 petals curving over 3 inner notched petals with green markings. After the seeds mature, the foliage usually fades away and becomes dormant, and comes back later. The bulbs of this plant multiply and spread in time, frequently naturalizing in areas where it grows or is planted.

The seeds have a fleshy tail containing material that attracts ants that distribute the seeds. While this plant is cross-pollinating (pollinated by bees), it sometimes self-pollinates.

This plant is best grown where the plants can become naturalized, like woodlands or lawn edges, rock gardens, under flowering shrubs or pathways.

This plant prefers lighting conditions that range from partial shade to full sunlight. When growing it indoors, it should be near a window where light can partially reach the leaves. It needs enough sunlight to support its growth and development.

This plant rarely needs frequent watering when it grows in the ground. Potted plants have to be watered a bit more since well-draining potting soil can hold less moisture. Keep the soil moistened but not soggy as this will make the bulbs rot. Don’t let the soil become dry and water the plant more frequently in summer.

This plant grows well in low to moderate humidity

This plant can adapt to varying temperatures although it needs to be exposed to lows of at least 20°F during flowering time, temperatures lower than -30°F will damage the plant. In areas with very hot summers and warm winters, grow the plant indoors.

This plant can survive snowy conditions unlike most plants since it has antifreeze proteins that prevent ice crystals from forming in their tissues.

Well-draining moist potting soil rich with organic matter is necessary for this plant. Soil pH should range from neutral to slightly alkaline.

Repot the plant after 2 or 3 years to a larger container after dividing the bulbs. However, If the bulbs multiply faster, you can repot it yearly after the flowers have dropped while the leaves are green. Leaving the plant for too long in the same container very often results in overcrowding, affecting healthy growth.

As a rule, propagating this plant should always accompany repotting as dividing the bulbs will reduce overcrowding and stunted growth.

This plant is easy to propagate by dividing the clusters of bulbs (repotting is a good time for this). After the flowers drop, carefully dig up a thick bunch of bulbs and divide them so that each separate clump has a minimum of four or five bulbs. Plant the individual clumps in new well-draining containers filled with fresh, humus-rich soil. Water thoroughly until water freely drains out. They usually take a year to become established. They will start producing more flowers and start to spread and multiply in their second year.

This plant can also be germinated from seeds but will take some time to mature and flower. Bulbs are available for purchase from nurseries and horticultural centers.

This plant is not a heavy feeder, an application of a general, slow-release fertilizer when planting is sufficient to form roots and grow new leaves. After that, water the plant with a soluble fertilizer at the next feeding in autumn. Wild-growing plants can fend for themselves but will benefit from a diluted potassium-rich fertilizer if they grow in garden beds or containers. They should be fertilized in 7 or 10 days, starting from when the foliage appears until it becomes yellow and wilts.

This plant naturally drops its leaves after the foliage dies but the bulbs are still viable and sprout after being dormant after flowering.

Pruning isn’t necessary but dead leaves can be pinched off occasionally to keep the plant healthy. After flowering is done, let the leaves remain to help gather energy to store it for the next growth. Cut down the leaves to the base when all the leaves die and turn brown.

This plant is not very affected by pests and is even deer resistant although it is vulnerable to bulb rot which often happens when it is growing in poorly draining soil, particularly in containers. Water-logged soil often causes the roots and bulbs to drown and also invites harmful pathogens and other organisms to attack the plant. Remember, these plants don’t need watering frequently (except in very hot weather), so keep that in mind when caring for and maintaining these plants.