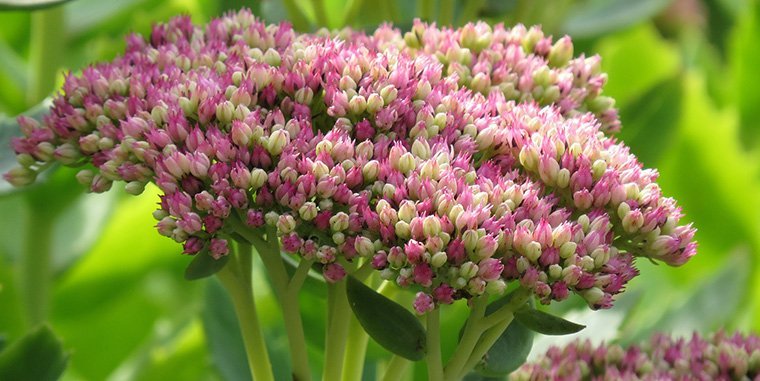 Sedum or stonecrop is a huge genus of plants from the Crassulaceae family. The genus was once said to contain around 600 species, however, this was later reduced to about 400–500. These leaf succulents are primarily distributed in the subtropical climates of Central America, the Mediterranean and Asia, but they are also found in the subtropics of Africa and South America.

This genus varies from trailing plants, ground spreaders, and upright growers. These plants vary in color, height, and shape and are hardy, drought-tolerant succulents. Generally, this genus is typically divided into upright and low-growing categories.

The species was first officially defined in 1753 by Carl Linnaeus, who documented 15 different varieties of all the genera in the Crassulaceae family; this genus has the most species. Many plants in the genus are grown as ornamentals for their attractiveness and resilience. These plants vary in their requirements as some can tolerate cold but not heat, while others require heat but don’t tolerate cold, several hybrid varieties have also been cultivated.

These plants have been utilized as roof coverings on green roofs to reduce and improve energy consumption instead of grasses. Notable examples include the Ford Truck Plant at Dearborn, Michigan, with a living roof of sedum growing on 454,000 sq. feet.

Most varieties thrive under a minimum of six hours of direct sun. While some varieties tolerate partially shaded conditions, they often will not be as robust or flower as abundantly as they will under full sun. However, several varieties grow in very hot and dry conditions like a little shade from the sun in the afternoon.

Water new plants just about once a week to stop the soil from getting dry. Once the plants are established, they usually don’t need supplemental watering unless they face a long period without rain and/or hot temperatures.

These plants have a good tolerance for drought due to their thick and fleshy succulent leaves. If they are potted and grow indoors, they will need watering every week or when their soil becomes dry, do not overwater as this might cause the plants to rot.

They prefer fluctuating humidity levels of 60%-80% with adequate airflow but do well with levels between 30%-50% with some water as long as they get sufficient light every day. These plants usually tolerate higher or lower humidity but good soil drainage is particularly essential in conditions of high humidity to prevent them from too much moisture.

Generally, these plants are tolerant of a broad range of temperatures, although high temperatures above 90oF can lead to leaf scorch. In winter, temperatures should be maintained between 60-70°F – temperatures below 50°F will make the plants go dormant.

When these plants are grown in containers, they need more care compared to plants growing in gardens. Repotting is necessary when they are too large for the current one – move them to a bigger container to accommodate the plant better. Spring is usually the best time for repotting but ensure the soil isn’t wet when you start repotting.

This plant is very simple to propagate by either stem cuttings or by division. For cutting propagation, take a portion of healthy stem from the plant that’s approximately 3-6 inches long and remove any leaves at the bottom.

Then plant the cutting, end down into suitable soil either in a pot or in the garden. These stems are very fruitful and will produce roots even if you simply place them on soil, but planting gives them a better chance for healthy growth.

The division comprises digging up a healthy plant and cautiously pulling the roots apart into separate sections. Then replant the sections into containers or in the garden, keeping the root ball just under the soil. Divided sections, like the cuttings, will also rapidly take root.

These plants don’t require supplemental fertilizing and are very tolerant of poor soil. Rich soil will cause weak, spindly growth. If your soil is very poor, adding some compost will usually be all the plant needs to get a boost.

Root rot is either caused by bacteria or fungi that thrive in wet soil. They can damage the roots and prevent the plant from absorbing water, thus dehydrating the plant and killing it. Rot moves up the plant and frequently, black, squishy stems and/or falling leaves turning brown and translucent is the first sign of damage.

If you catch this early, the damaged roots can be trimmed off and the plant transferred to fresh soil. Usually, it is easier to remove healthy stems above the damaged areas and plant them in fresh soil and only water when the soil gas dries completely.

Mealybugs are pests that live and hide under the plant’s leaves and are difficult to spot. They secrete a sticky “honeydew” that gives away their presence. Another sign of the infestations is you notice ants crawling over the plant to harvest the honeydew – quite often, it’s the ants that introduce the bugs as they farm the insects for their honeydew. Use insecticidal soap and/or neem oil to treat the plant.

Aphids can infest the plant on occasion; they are similar to mealybugs as they also secrete honeydew. Succulents grown outdoors often fall victim to these pests, treatment is similar to that of mealybugs.

Spider mites are minute pests and the only sign of their infestation is a white webbing on the foliage. Treatment is similar to that of mealybugs and aphids.