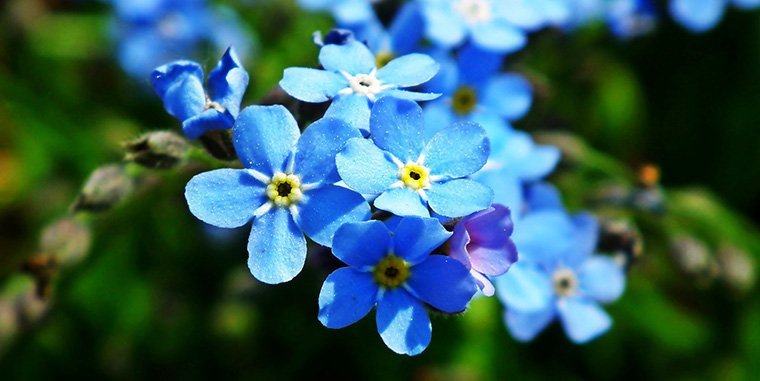 One particular species, M. scorpioides, is so named as the flower inflorescences resemble the coiled tail of a scorpion, particularly when they are in their budding and early flowering period.

These temperate climate perennials, originally from Europe, Asia, and North America, are now widely grown in temperate climates of both the northern and southern hemispheres. The plants were popular garden plants in France and Germany for centuries, only gaining popularity in England during the 1800s.

Technically they are perennials, although most gardeners cultivate them as short-lived biennials, planting seeds in summer to enjoy their flowers the next year. They have hairy stems and are usually about 5 – 12 inches high with a similar width. The stems are branched, angular and erect, tending to grow upwards.

These plants are appreciated for their numerous attractive flowers while the star-shaped flowers are usually blue, other colors such as white, yellow, and pink, often change color as they mature, indicating that they are no longer suitable to be pollinated.

The flowers are about ½ inch or less in diameter with 5 petals. The slightly hairy leaves are alternate, with a largely diffuse root system.

The seeds are enclosed in tiny, hairy, tulip-shaped fruits on the flower stem. These fruits often attach themselves to animal fur and clothes, helping them get distributed elsewhere to germinate in other locations. The seeds can be harvested by shaking the seed pods on a sheet of paper.

These versatile plants are tolerant of deer and rabbits, serve as food plants for the larvae of butterflies, and can be cultivated as a ground cover, in containers on patios and porches, in a cottage, woodland, and rock gardens

However, since they reseed easily and spread without human intervention, care must be taken to stop them from reseeding in case you prefer a well-organized garden. Flowers should be deadheaded and remove any seed pods to prevent unwanted spread, these plants are considered invasive in most regions where they have become naturalized.

The small flowers have been used as floral emblems by many societies, medical foundations, and countries. Traditionally, the flowers symbolize remembrance, protection, and luck. Many also associate the flowers with love, particularly lost love.

They thrive well in direct sunlight and partial shade however, they need to be shaded from the harsh sun in areas with hot summers generally, and they need more watering when exposed to more sunlight.

In northern areas, you can either grow it under full sun or in partial shade, although they won’t grow well under full shade. Potted plants might have to be rotated every few weeks to ensure that lighting is evenly distributed.

They prefer growing in evenly moist soil as long as it doesn’t get water-logged. Water the plants in winter only if you see them wilting.

These plants are prone to be attacked by powdery mildew, particularly in humid conditions. They won’t do well in areas with very hot and humid summers.

They are native to temperate climates and can withstand both frost and moderately hot temperatures. Their ideal temperature range is between 60 – and 70°F.

These plants thrive better when grown in rich, moist, and well-draining soil.

Although they can be grown indoors as a container plant, they need good air circulation to prevent fungal problems. They do better when growing outdoors in containers and only need repotting when they get overcrowded.

Use a larger container to accommodate their growth, with sufficient drainage capacity and regular potting soil. After easing the plant out of its previous container, remove any old soil and transfer it to the new one. Water it well and add extra soil if needed.

These plants reseed and multiply without human intervention. Once you plant it in your garden, it will have it for several years unless you keep it in check. You can make use of this aspect to propagate more plants by digging up and replanting the seedlings that have spread around the original plant, spacing them around 10 inches away from each other.

You can also introduce this plant to your garden by purchasing seeds. In early summer, pick a location in your garden where you want the plants to grow, loosen the soil and scatter the seeds, and keep watering the spot lightly until the seedlings germinate.

The new plants will start blooming in spring. Remove any unhealthy-looking seedlings to allow good air circulation and provide room for the plants to spread, you can also transplant seedlings elsewhere when 2 – 3 leaves appear or when they are 2 months old.

Feed these plants every 2 – 3 weeks in spring with compost or general-purpose fertilizer.

The flowers are key to the beauty of these plants so group several plants to let them grow together. Several plants growing together will enhance the display of the small flowers, creating a colorful look in your garden.

So, pruning is not necessary, to prevent the plants from reseeding and spreading by themselves, you must deadhead spent flowers to stop seeds from being produced.

Insect pests generally leave these plants alone but they are vulnerable to two diseases. Powdery mildew is a powdery coating that can sometimes appear on the foliage while it isn’t fatal for the plants, it will temporarily affect the look of the plants. This can be prevented to a certain extent by not wetting the leaves.

Rust forms in pustules that break open later, releasing orange spores underneath the leaves and more visible yellow spots on top of the leaves. It generally thrives in damp conditions, just like powdery mildew this can also be avoided by not wetting foliage as well.