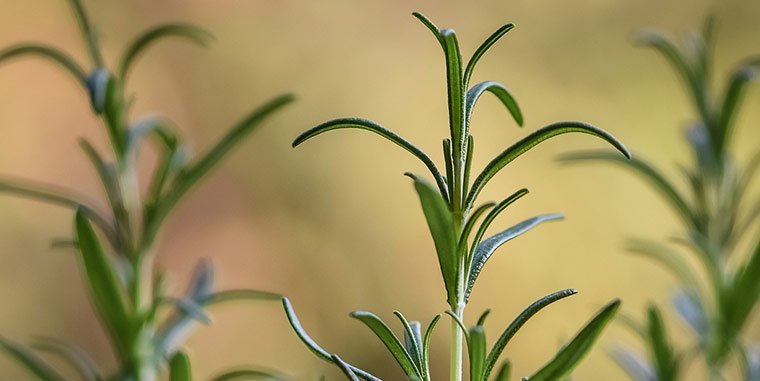 Salvia Rosmarinus or rosemary, a perennial shrub with sweet-smelling, needle-shaped leaves and white, blue, purple, or pink flowers, is indigenous to Mediterranean countries surrounding the Sea and Asia. It’s a part of the family of mint (Lamiaceae), which comprises several other herbs used in cookery and medicine.

It is fairly hardy when cultivated in cool climates. It is drought-resistant and able to survive without water for a long time. It’s viewed as a possibly invasive type in some places of the world.

The evergreen leaves are about 3⁄4–1 1⁄2 inch long and thin, with green on top, and white underneath, with thick, woolly “hair”. It has a fibrous root arrangement and can live for almost 30 years. While the plant begins to bloom in temperate climates in spring, it can constantly flower in warmer climates. The flowers vary from white or deep blue, purple, or pink.

The earliest mention of the plant was discovered written in cuneiform on stone tablets around 5000 BCE. Egyptians used the plant in their burial ceremonies. Pliny the Elder noted it in his The Natural History, so did Pedanius Dioscorides in his famous historical chronicle of herbs, De Materia Medica. The plant was then taken to China and was established there around 220 CE.

It is thought that the Romans brought it with them when they invaded England, but there is no clear record of the plant until the 8th century CE, under the reign of Charlemagne, who ordered rosemary and various other herbs to be cultivated in monasteries and farms.

Their earliest account of the plant being cultivated in Britain was in 1338 when the Countess Joan of Valois sent cuttings to her daughter Queen Phillippa of England. She included a letter describing the benefits of rosemary and several other herbs that accompanied the plant – the original letter can be viewed at the British Museum. All these herbs were grown in the palace garden of Westminster.

After this, rosemary was found in several texts about herbs and is widely used in cookery and medical purposes. Rosemary was brought to the Americas by European colonists in the 1600s, soon spreading to South America and globally distributed. William Shakespeare also made several references to rosemary in his famous plays.

While rosemary is cultivated as an attractive ornamental plant in gardens, the leaves are widely used in cooking, particularly in Mediterranean cuisine as well as herbal tea as a memory aid.

It is an easy plant to grow and is resistant to pests. Since it can grow large, it is pruned and shaped and grown as low hedges and is easy to grow in pots.

It requires about 6-8 hours of full sunlight every day when grown outdoors. It needs bright light when grown indoors, but don’t let the plant get too hot.

Water the plant evenly between 1-2 weeks or when the soil is completely dry. Do not over-water the plant particularly if grown in containers, as it will cause root rot.

It is used to absorb moisture from the air and does well in levels of 45 to 55%. Keeping the plants cool and placing them on humidity trays will increase humidity and reduce damage. Regular misting will also help, spraying once or twice every day. It doesn’t need high humidity, just enough to be comfortable. Higher levels of humidity and no air circulation will lead to disease.

The plant can handle high temperatures and a varied level of humidity when grown outdoors. While some varieties can endure temperature lows of −4°F, most varieties are usually hardy only down to 30°F. Ensure that the plants don’t dry out completely when growing outdoors.

Rosemary likes to grow in sandy and well-drained soil since it is indigenous to the rugged hillsides around the Mediterranean and is prone to root rot if the soil is water-logged.

When repotting the plant, remember that it likes its home to be dry, so terra cotta pots along with sandy soil are the perfect match. Rosemary plants tend to get root-bound fast and must be repotted every year. Early spring is about the right time for repotting, but it will still be fine if repotted at random times.

Lower leaves becoming yellow or if the plant looks like it’s not receiving enough water is an early sign that it needs repotting. If you don’t like to transplant it into a new pot, prune off a few inches from the bottom and sides of the roots as well as pruning the plant itself and return it to the same pot. This will help reduce the demand placed on the roots.

Propagation by seeds is often unsuccessful due to the low germination ratio and rather slow growth of the seedlings. So the widely-used method of propagating new plants is by cuttings taken from mature plants. Cuttings develop fast inappropriate conditions and new growth will appear relatively fast.

Rosemary does not need feeding, but fertilizing it with a balanced fertilizer in spring will give it a nice little boost. Occasional foliar sprays with diluted liquid fertilizer (1/4 of the recommended dose) will keep it doing well.

It has to be pruned regularly after it flowers to prevent lanky growth and help it become bushier. The common rule for pruning is to take just about 1/3 of the plant at any given time and cut above leaf joints.

The biggest issue growing the plant indoors is getting the right humidity levels. High humidity and reduced air circulation often result in white, powder-like fungus infesting the plant. While it won’t kill your plant, it will become weak. Frequent misting will help balance humidity levels.

Aphids and spider mites tend to infest plants and spotting them before a complete infestation makes it easier to control them. Frequent spraying with insecticidal soap should eradicate them.

Not enough humidity will shrivel the leaves and rapidly kill the plant.