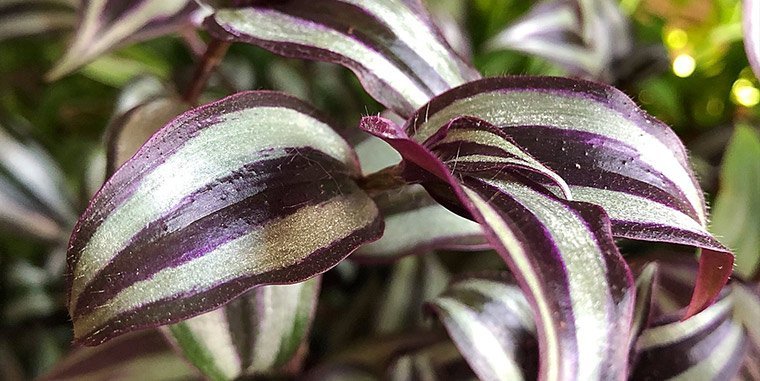 Tradescantia zebrina, formerly Zebrina pendula, a perennial spiderwort variety, is sometimes called inch plant, but it’s more frequently called wandering jew, sharing that name with its closely related varieties Tradescantia fluminensis and Tradescantia pallida, though it has recently been called wandering dude. While it is originally from Central America and various islands in the Caribbean, it has been naturalized in some areas of Africa, Asia, South America, Australia, and Oceania.

This plant doesn’t grow very high, reaching a height of 6 inches and 10 inches in width when grown indoors, although it can be widespread outdoors.

The attractive leaves are hairy, with pointed tips and rounded at the base and are bluish-green with two linear stripes silver on the top and purple underneath and can reach about 4 inches long. It produces flowers in groups, usually with three pink petals, and is similar to the other Tradescantia varieties and forms fruits in capsules with gray-brown seeds.

The plant grows in dense mats of ground cover in the wetlands and rainforests, quite often growing on stones in shaded and open environments or along river banks at altitudes of 6500 feet or below, but it mainly thrives in lower altitudes.

Under favorable conditions, each of the leaf nodules on the stems can form roots when they are in permanent contact with damp substrates such as stone or soil, or water within a day.

It is commonly cultivated as an indoor plant and as a groundcover and can aggressively spread to other areas if undisturbed.

It can easily become invasive if not properly pruned and controlled, classified as Invasive in South Africa, and cannot be propagated or planted, selling seeds or cuttings is prohibited as well as being dispersed or transported in urban or rural areas. It has also been classified as an invasive plant by the Galapagos Islands.

This plant grows best under indirect, bright sunlight. While it tolerates low-lit conditions, its colors won’t be as vibrant and leaves can lose their variegation.

As it is a native of the tropics, it thrives and grows best when its root is always well nourished by water. However, water-logging must be avoided as this causes root rot. This plant prefers to be watered with rainwater or distilled water. Do not water the plant from the top to prevent mold or diseases.

It likes an average to a high level of humidity. Regular misting the plant will satisfy its humidity requirements. You can grow this plant in your bathroom if extra humidity is needed. Low humidity can attract unwanted pests.

This plant can thrive well in average indoor temperatures between 60-75° F. As long as it doesn’t drop below 55°F for a long period this can be fatal for the plant.

Any regular potting soil will satisfy this plant, as long as it’s well-draining. But while this plant can grow well in soil, it can also be grown in water or hydroponic systems.

Repotting is always necessary to keep root systems healthy. As its “Inch plant” name suggests, this plant grows very fast and usually spreads far if not controlled. So repotting it occasionally is a good idea, even if it doesn’t get more than 2-3 years old.

Like the other varieties of this species, propagating this plant is infallible and extremely easy since the plant naturally forms roots at every leaf node when in permanent contact with any substrate.

Take cuttings of about 2- 3-inch long and insert them into soil or water. When the roots form, transfer them to a suitable container/pot filled with soil and water the new plant well.

This plant is considered to be invasive in some places due to the relative ease of how it can spread and propagate, with certain countries such as South Africa enacting laws strictly forbidding the sale, cultivation, and transportation of the plant.

Any small bit of stem that breaks off the plant can potentially become a new plant if it falls on a suitable substrate and spreads rapidly.

Feed the plant once every month during April – October. Do not fertilize it in winter. Fertilization is only needed in its 2nd year of cultivation or after repotting it, although this plant has a reputation of hardiness and can survive well enough without feeding.

Pruning this plant is essential to keep it under control due to its rapid growth. You will have to frequently cut off stems to curtail the spread of the plant as it can quickly take over a garden. Growing it indoors is ideal (in hanging baskets) as growth can be monitored and maintained.

This plant is usually prone to attacks from aphids, particularly in dry environments, as well as spider mites. These pests can cause plenty of damage to the plant if not treated and can be eradicated using cotton swabs or a brush drenched with rubbing alcohol and/or appropriate pesticide. Repeat frequently until no new eggs hatch and remove any infested/damaged leaves and stems.

This plant, if grown under low light conditions, will develop plenty of green, un-variegated leaves. Another sign of insufficient light is the plant’s foliage suddenly losing color and variegation. To resolve these issues, let your Wandering Jew plant get exposed to a greater amount of bright, indirect sunshine.