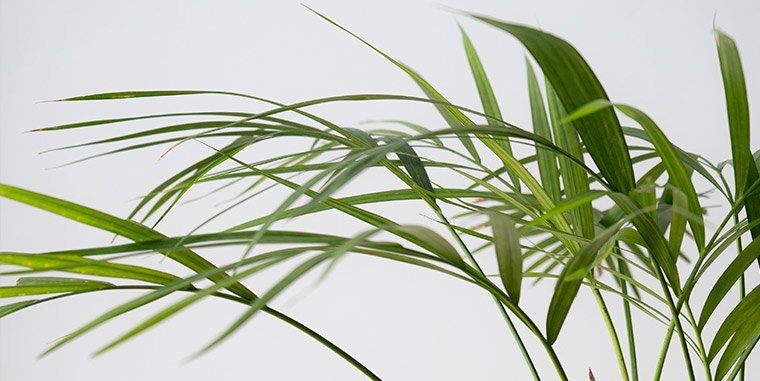 Chamaedorea elegans or neanthe bella palm/parlor palm is indigenous to the Central American rainforests and belongs in the Arecaceae family of the Chamaedorea genera. This palm is among the most popular indoor palms sold worldwide and its fronds are regularly harvested and used in flower arrangements.

This palm is a rhizomatous and woody tropical plant with a slim green trunk, growing to 7–10 feet tall (some found growing to 13–16 feet in its natural habitat). The pinnate fronds are 6 inches or longer and 1 inch wide, with 12 or more paired thin leaves.

The crown has 3-10 fronds, increasing to several more when fully mature. When grown indoors, it is usually grown in 6 – 14 inch pots/containers, ranging in sizes between 3-4 feet tall. With good care, this palm can reach 6-8 feet tall indoors.

A notable feature of this palm, when groomed well and cared for, is the premature onset of flowering at an early age, with blooms appearing when the palm is just 12 inches high.

The flowers appear below or in between fronds and range in varying hues of yellow, orange, or red, emerging as lateral buds from the trunk and open in clusters of tiny little balls with no petals.

It is not famed for its flowers as they don’t have much of a strong fragrance or a notable appearance. Dark pea-sized berries form in paniculated clusters sometimes develop after flowering.

The palms are often found competing with vines in their natural habitat, sometimes found growing along walls of rock that help provide support. The palm tends to fall over in storms due to its thin stem if growing in the open, although it reroots itself with the help of its rhizomatic roots.

It is often grown in temperate climates in gardens as well as an indoor plant in the Southeast United States, reaching almost 7 feet tall with rather slow growth. It is mostly sold on by cultivators in groups of seedlings, most of whom eventually die when crowded out by dominant stems that can thrive for several decades when housed in a pot.

The plant was popular among the British in the 1800s as it could survive and tolerate the dark, chilly British homes and greenhouses that were used to cultivate interesting plants. This plant is almost always in great demand because of its ability to adapt to average indoor conditions.

While it does well in low lighting conditions, it thrives better in medium to high indirect bright light.

Low light will make it produce darker green leaves and can do well in almost all office or home lighting, although growth will tend to be a bit “leggy”. It cannot endure direct or harsh sunlight.

Under-watering this palm is better than over-watering it. Water it well and wait for the soil on the surface to dry before watering it well again. This is a somewhat drought-tolerant plant and forgiving if you miss watering it on time.

Watering must be reduced in low light or low temperatures as it doesn’t need much water under these conditions. Excess watering for long periods will attract fungi and initiate root rot, which could instantly be fatal for your plant.

To prevent this ensure there’s no tray to collect water runoff after watering it. Ideally, with average humidity, temperature and light, it should be watered between 7-10 days to help it thrive properly.

Like its natural tropical environment, the palm grows and looks best when humidity levels are elevated and consistent. While it tolerates low levels of humidity, the plant might develop brown tips on its fronds.

Reproducing its preferred climate can be done using different methods/techniques such as raising humidity levels with a humidifier, or putting the container on a tray of pebbles to catch water runoff which will also help raise humidity when it evaporates.

You could also keep it in your bathroom since the almost continuous use of water will produce enough humidity for the plant.

It prefers temperatures between 65-80°F and can withstand lows of about 50°F but it will die if grown in low temperatures for extended periods.

Don’t expose it to cold drafts around vents or windows as its leaves might start developing dry edges and/or brown tips. To correct this problem, increase the humidity, temperature, and water the plant more.

This plant can be cultivated indoors in a well-draining mix of peat and soil, whereas it can thrive in a mix of loam, sand, and clay, as well as several variants in between outdoors, but it prefers loam rich in organic nutrients. It does not like salty soils or soaking, water-logged soil at any time.

It also requires acidic or neutral soils between pH levels of 5.1 and 7.5. Alkaline soils will result in yellow foliage as they can’t make use of iron, manganese, and magnesium, nutrients that are very vital for a healthy plant.

This plant generally doesn’t appreciate its roots being frequently disturbed since their root structures are weak. Regular repotting will be damaging in the long term but despite this, younger plants will often have to be repotted annually until they reach maturity to give them room for expansion.

Older plants need repotting only when the soil has become very compressed, preventing water from being absorbed into the soil or it becomes water-logged. Accordingly, a mature palm should be repotted once in 2-3 years.

Typical regular soil is used for repotting, with a container a size larger or you can keep the plant in its old home after freshening the soil mix. When repotting it, secure it well by tightly packing the roots with soil.

Division, while not surefire, is the simplest option to turn one palm into two by splitting the clusters of stems of the existing plant. Some foliage dieback will take place on both the new and old plants, but this can be cut trimmed away from healthy leaves. Begin with a healthy, thriving plant that has several healthy stems.

Select a suitably sized container for a single stem from the original plant. Fill it with an equivalent-part mix of moss and perlite/vermiculite.

Carefully ease the mother plant out from its container and loosen the soil to uncover the bare roots. Select a healthy stem that has a good root structure and gently separate any roots attached to the mother plant with a clean and sharp blade/cutter.

Plant your new stem in the container, ensuring the roots are inserted in the soil. Place the original plant back into its container, topping it off with fresh soil.

Water both plants well, keeping the soil moist and humid. Place both the plants in an appropriately shaded area to recover, then take care of them as usual.

This plant is relatively small and doesn’t need a large amount of fertilizer to thrive. An organic or slow-releasing fertilizer once every 2 months will be enough for older plants, while young plants will need feeding once in 4 weeks.

Mixing 2 or 3 inches of organic or well-composted material when planting will provide all the nutrients it needs for the first year, followed by the recommended feeding (above) in its second growing season. Incorporate the fertilizer in the soil and never let it contact the foliage.

Pruning should start from the bottom for mature plants, never pruning the top as this is fatal. These plants generally don’t grow very high so pruning is not recommended except to remove yellow or dead fronds. Growth will cease completely if the plant is aggressively pruned.

Always keep the surroundings of the plant clean to prevent diseases and pests.

Most problems that occur are related to improper humidity, watering, and lighting. Pests will be attracted to a dry, under-watered plant, and disease will attack over-watered roots.

Pests such as spider mites, scale, and mealybugs can infest the plant when conditions are adverse. Frequent reapplication of diluted neem oil as well as insecticidal soap, including cutting away affected foliage can help eliminate these pests.

Root rot is indicated with symptoms similar to some disease infections and pest infestations, such as faded or dropping leaves, weak growth, and dying branches leading to eventual death. This happens frequently in damp and water-logged soil.

Since there is no treatment for stem or root rot, prevention is the only solution to keep this from happening by monitoring the watering schedule (under-watering is better than over-watering) and ensuring the plant has well-drained soil.

Leaf Spot, a fungal or bacterial disease, creates spots that can become bigger on the leaves. If not treated, it will damage the foliage. Remove diseased leaves and avoid watering the plant overhead. A regular fungicide application will also help. 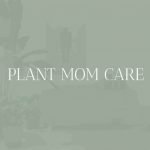 Plant Mom Care
How to Care For a Parlor Palm