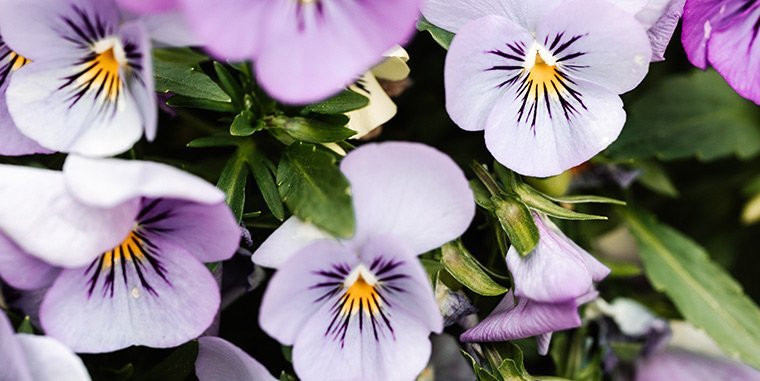 The pansy is a popular plant that has long been cultivated for its lovely flowers. It is derived from several different varieties from the Melanium section in the Viola genus, specifically, a wildflower, Viola tricolor, from Europe and West Asia called the heartsease.

The name “pansy” comes from the French word pensée or “thought” as the flower was considered a symbol of remembrance. The plant started becoming popular cultivars among English gardeners in the early 19th century and there were 400 varieties available by 1833.

This plant grows 9 inches tall, producing flowers 2-3 inches wide with two overlapping upper petals, two petals at the sides, and a bottom petal along with a small “beard” arising from the center, like showy face markings, These petals are generally yellow or white, blue or purple.

Plants grow well in sunny or partially sunny positions in well-draining soils. Plants generally produce foliage first, producing flowers and seeds in the second year, and then they die. Careful breeding and selection have resulted in some varieties blooming in their first year, sometimes in nine weeks from sowing.

These plants can survive light freezing conditions and some snow but need mulching in locations of prolonged snowing. In warmer climate zones of 9-11, they can bloom in winter and are frequently planted in fall, often re-seeding themselves to return the following year.

They are not tolerant of heat and warm temperatures will prevent flowering and promote leggy growth, while hot humid air causes rotting and death. They thrive in areas with moderate temperatures and mild rainfall and sunshine.

The plants have been the subject of several famous poets, authors, and painters.

These plants grow and flower best under full sun to part shade, but grow better and will keep flowering longer if grown under partial shade.

For optimum growth, they must be thoroughly watered once weekly, contingent on growing conditions. While this will help them survive a bit longer, they usually don’t last very longer than 2 years. They prefer moist but not saturated soil. Make sure the containers have enough holes for water drainage or they have well-draining soil if cultivating them in the ground as they don’t tolerate over-watering.

Although these aren’t fussy plants, they thrive better in rich, loose soil with a slight acid pH of 6.0 to 6.2. Amend the soil with compost to provide them with good nutrients.

These plants are great for cultivating in containers. Use containers 12 inches or so in width filled with appropriate soil. As these plants generally don’t last very long, repotting is only necessary when transplanting seedlings.

If you don’t cut off the flowers, these plants will drop seeds that take root the following spring in colder climates. However, most cultivars are hybrids and the resulting plants will not resemble the parents and you most likely will get flowers that revert to either of the hybrid parents.

The best way to propagate pansies from seed is to purchase commercial hybrid seeds, which are specially created by manually pollinating one variety with pollen from another variety.

Sow the seeds in a tray of seed-starting soil, moisten the soil, and keep them covered until they begin germinating after two weeks. Then uncover the tray and relocate to a brighter location, keeping the soil moist.

Transplant the seedlings into small pots when they grow a few inches high and have developed a minimum of two sets of leaves. Repot to larger pots if growing them indoors or plant them outdoors when the weather turns warm.

Use a regular all-in-one fertilizer to fertilize the plants and help them grow well. Be careful of using a fertilizer with more nitrogen content, as this promotes more foliar growth instead of flowers. To maximize flowering, it should be fed every other week, depending on the kind of fertilizer used.

If you don’t want the plant to seed, remove faded/dead flowers to encourage the production of more flowers and to extend the flowering season. Remove dead/damaged leaves and stalks.

Aphids are little pests that sometimes feed on these plants and can potentially infect them with the mosaic virus. Plants infected with this virus develop fine yellow veins on young leaves, inhibited growth, and abnormal flowers. The virus often becomes dormant, affecting the whole plant, and can be passed to the next generation of plants including other plants. The only way to prevent this virus is to maintain the plants properly, have frequent monitoring, and only purchase healthy plants from reputed cultivators.

Leaf spot is caused by a fungal infection, causing dark spots to appear on leaf margins, followed by a white web coating the leaves. It usually happens during cool and damp conditions in spring.

Downy mildew is initiated by an organism called Peronospora violae that is similar to a fungus. This produces purple-brown colored leaf spots, often encircled by yellow, accompanied by a grey mold underneath the leaf underside. It can severely damage or kill infected plants.

A fungus from the Erysiphaceae family causes powdery mildew that creates a violet-gray powder along the fringes and undersides of leaves. Poor ventilation is the main culprit and, while the damage can be limited to a certain extent, the disease will not be eliminated by using fungicides.

Snails and slugs sometimes attack and feed on the leaves outdoors. Spread diatomaceous earth near the plants to deter these pests.

Stem rot, also called pansy sickness, comes from a fungus present in unsterilized animal compost. The plant might suddenly collapse without any warning, with the leaves and flowers shriveling and fading prematurely.

Plant stems will snap off if slightly tugged. Preventive treatment for this includes the usage of fungicides to treat the soil before planting, although the plants might not be able to survive. Burn and destroy affected plants to prevent the pathogen from spreading and infecting other plants.