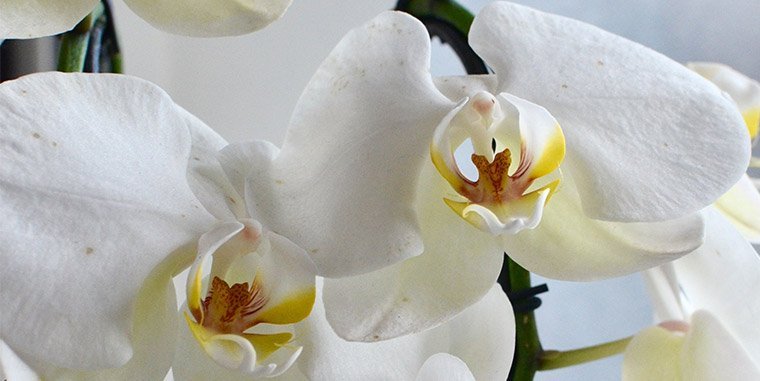 Orchidaceae or orchids are a varied and extensive group of blossoming plants, with flowers that are colorful and scented, comprising 25,000 types and growing all around the world, particularly in the tropics.

They are perennials that are usually terrestrial or epiphytic plants (growing on other surfaces and plants instead of soil).

Epiphytes are often like vines and have a soft root coating called velamen that soaks up water from the air. Most produce food for themselves, but some grow on decayed vegetation (saprophytic) or get sustenance with help from a fungus existing among their roots.

Flowers vary greatly in size from minute blossoms of some species about 0.1 inches wide to some that can get larger than 15 inches.

The structure variety among the flowers can be ascribed largely to the ways of pollination in the species or to the fact that the species has adapted to utilize a variety of pollinators.

Orchids have a broad range of tolerance for different ecological environments, beginning at sea level to at least 15,000 feet high on mountain slopes.

While the species is largely tropical, several varieties grow in temperate zones, with no less than four varieties found in the Arctic Circle.

Several varieties in the northern temperate zone have been found growing in prairies, swamps, forests, and grasslands. Some varieties have also been found thriving in deserts, growing on cacti.

The greatest varieties of orchids are found in cloud forests in the tropics, generally on mountain forests where clouds cover the mountains in the days and nights.

Moss and lichens usually thrive in these forests and the slopes allow sunlight to permeate the foliage to the ground.

This is an ideal environment for epiphytic orchids as well as other epiphytic plants. Rain forests on flat ground are poor locations for orchids.

About 125 varieties of orchids have been found, some quite rare, on the Amazon River located in Peru.

Orchids that grow in rainforests largely grow on the treetops in the canopy. The tropical forests, where there is a clear division between the rainy and hot seasons often have several orchid varieties.

However, deforestation due to farming is slowly encroaching into these forests.

Other than the usual cultivation in gardens and homes, orchids have several uses in perfumery. One type of climbing orchid is the famous vanilla, native to the tropics of the Western Hemisphere.

A variety of orchids have become national flowers of countries such as Belize, China, Colombia, Costa Rica, Guatemala, Honduras, Panama, Singapore, and Venezuela among others.

Charles Darwin studied and documented the intricate contrivances utilized by orchids to accomplish cross-pollination. Orchids have evolved such complex pollination techniques that have reduced the chances of getting pollinated.

That is why the flowers famously last longer. Pollinators that help in the process include fruit flies, bees, ants, and other insects, with some varieties self-pollinating.

Flowers usually wilt once pollinated but usually stay connected to the ovary.

The ovary forms into a seed capsule with numerous seeds that are usually close to being microscopic. Almost all species have seeds that don’t have endosperms and have symbiotic relationships with different types of fungi that offer the necessary nutrients for germination.

Only a few species of orchid have seeds that germinate without fungi involved.

Orchids prefer indirect bright light, with low light resulting in poor flowering. Too much light can result in leaf burn. Orchids have very broad variable light requirements and learning the correct amount of light for each type is important in cultivating them.

Fortunately, light requirements can be easily replaced by grow lights as well as timers these days to suit your orchid.

Orchids need plenty of water but must be dry before watering again. Correct watering is perhaps the most challenging facet of orchid cultivation to get right, as this differs with the species, the soil mix, and growing conditions.

This will take plenty of time and patience but ultimately pays off with a healthy and vigorous orchid ending with better flowering. Water the orchid well until the plant and the growing media is well saturated and drained well and over-watering can be fatal.

Orchids grown indoors need suitable humidity in the 50-70% range. Humidity trays can help raise humidity levels, as these collect water in the base with the plant suspended above.

Purpose-made trays can be bought or fashioned from a pan or dish filled with gravel and water. Gathering orchids together also helps to boost humidity among them.

Achieving the right balance of humidity as well as air movement is key to successful orchid cultivation.

This is also central for growing orchids indoors. While they can tolerate cool or warm temperatures during their usual growing period, they require temperatures to drop about 15 degrees from daytime levels at night to flower satisfactorily.

This also depends on the variety of orchids you are cultivating. Some orchids prefer a range between 75-85°F, while some prefer a range of 65-75°F. Some also use the temperature variations on the seasons as a sign to prepare for the flowering season.

This can be an issue since most people prefer consistent temperatures that are different from the orchid’s preferences.

Again, this depends on the type of orchid – knowing what each variety needs and adjusting to those needs will be rewarding when you see those beautiful blooms.

Generally, this depends on the variety of orchids. The best mix is something that has good drainage capacity as well as good aeration. Orchids require shallow planting and will not grow in soil.

Healthy roots are key in growing healthy orchids as while the health of other plants is judged by their foliage, healthy root growth indicates that the orchid is doing well.

Before beginning to propagate your orchid, you should check what method should be used. A few varieties of orchids are propagated from cuttings.

Another method is by separating plantlets from the main plant and repotting. Lastly, you can propagate by removing rhizomes and potting them.

First, start with cutting a stem from the main plant, dividing it into segments with 3 to 4 nodes each, and plant it in a tray filled with moss. The cuttings must not be in indirect light, but in a shaded humid environment while waiting for new leaves to grow.

Keiki cutting is another option and is done by detaching and repotting small plantlets that have formed on the stems of the orchid.

This should only be done when the plantlet roots are about 2 inches long and they have developed a few leaves. Place these in a moss-filled pot, letting them grow in a shaded humid environment.

Rhizome cutting is yet another technique, and involves dividing a plant’s rhizomes, stems, and leaves to get several plants. This should be done when the orchid is mature and after it has flowered.

Select a horizontal-growing stem with pseudobulbs possessing roots and leaves. Carefully separate it from the plant by slicing through the rhizomes and replant in a separate pot. It should take root nicely in the appropriate growing conditions.

Orchids should be fed weekly when new growth is being produced and once a month afterward. Do not feed the plant in winter.

Orchids are sometimes attacked by scale, mealybugs, fungus gnats, and aphids. These can usually be sprayed off or wiped repeatedly with insecticide soap.

Cinnamon is an effective preventive treatment for bacteria and fungus infections. Keep a stick of cinnamon soaking in water and spray your orchid periodically with the infusion. There are several other pesticides and fungicides specific for treating orchids.

Sometimes problems can move from the foliage into the growing media and the roots. If your plant doesn’t seem to be recovering it could be due to pests and infection hiding in the roots or growing media. In this case, repotting is the best option to eliminate the problem. 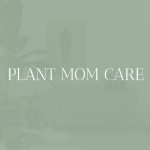 Plant Mom Care
How to Care For Orchids