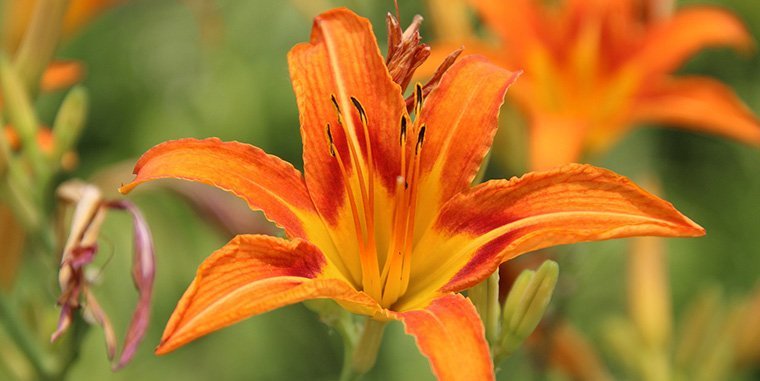 Orange daylily or Hemerocallis fulva, a species from the Hemerocallis genus belongs in the Hemerocallidoideae subfamily of the Asphodelaceae family and is indigenous to Asia. This plant was first cultivated in Europe starting from the 1500s onwards and, after escaping from gardens, became an invasive species across Europe, most of the US, and some areas of Canada.

Its persistent nature and spread form dense growth that excludes native plants. It is quite a difficult plant to control since it spreads underground, often requiring plowing surrounding areas to remove roots by raking and by hand.

This herbaceous perennial grows from tuberous potato-like roots, with stems 24 -30 inches tall and 24 -30 inches wide. The light green linear leaves are 1.8 – 5 feet long and about 1⁄2 inch broad, resembling ornamental grass. The orange flowers are 2 – 4 inches across and grow in groups of 10 – 20 flowers on leafless stems.

The flowering season lasts for around 6 weeks. Each flower lasts only for a day, opening successively after the previous one fades, hence the name. The fruit, a capsule around an inch long and 1/2 inch broad, splits open to release seeds when mature. However, most plants cultivated today are sterile.

This long-lived perennial can adapt to various garden conditions and does well in difficult conditions that affect other plants from thriving. It is widely cultivated as an ornamental plant in temperate climates and makes a good groundcover for gardens since it persists, produces showy flowers, and is easy to cultivate.

This plant attracts hummingbirds and butterflies and is good for controlling soil erosion.

This plant loves plenty of sunlight but it can also be planted where it gets morning sun, with some shade during the afternoon. This plant can also grow under more shady conditions, although it will not flower as profusely.

This plant does not need too much watering in line with its low-maintenance character unless you are undergoing drought or experience very little rainfall.

It will appreciate watering every second day when it is first planted, later reducing it when it gets established to just 1 – 2 times a week, by its second year, depending on the soil it grows in and on the weather, it might not need frequent watering.

Just dampen the soil— an inch in a week is good enough, although plants growing in sandy soil might require more frequent watering. This plant is drought-tolerant, but grows and thrives better if watered judiciously.

It can tolerate moderate to high summer humidity.

Although this plant is very adaptable and hardy, it grows and thrives better in moist and well-draining soil.

This plant is best divided when repotting, this helps reduce the size as well as produce new plants. It grows well in containers since it is a low-maintenance plant. Repot it in spring – every 2 – 4 years is fine or when the pot gets overcrowded.

Remove it from the container and carefully work the leaf fans along with their attached roots apart with your hands or with a sharp knife. After dividing it, new sections can be planted into new containers filled with suitable soil and watered well.

The plant can naturally spread very rapidly by its underground rhizomes. Whether it grows in the garden or in containers, it has to be divided to prevent overcrowding. This can be done after the flowering season is finished in fall or spring for cold climates.

Wait until the plant has finished blooming, gently dig and uproot the plant, using a spade or sharp knife to divide the plant into separate sections, each section comprising of leaves and roots. Replant the divided original and transplant the newly separated divisions in a new location.

Since this plant is not picky regarding soil types, it generally doesn’t need to be fed unless it is growing in very poor or sandy soil.

Adding some fresh organic compost every spring is the best option for this plant, however fertilizing it once in spring will also work as mentioned, it might require more feeding if it grows in poor or sandy soil. The best solution is to prepare a rich mix of soil when planting it to help it grow and thrive.

Pruning is minimal – deadhead spent flowers when all flowers have bloomed on a stalk, cut down the whole stalk to keep the plant tidy, vibrant, and healthy-looking. Dead foliage and seed pods can be removed as well.

In cold climates when winter approaches, you can leave the foliage to die in place. This helps to insulate and protect the roots, acting like a protective layer similar to mulching through the winter but if the foliage looks diseased, cut down the whole plant and apply mulch over the roots.

Thrips, aphids, spider mites, and gall midges commonly attack these plants. Thrips generally don’t need treatment if the plant is healthy. Severe infestation can be treated with horticultural or neem oil to eliminate these pests. Aphids can be dealt with using a homemade insecticidal soap spray. Spider mites mostly cause trouble in hot and/or dry weather. Keeping the plant well watered and a shower once weekly or so in hot weather will help reduce spider mite infestations.

The gall midge, a pest now widespread over areas of Northwestern US and Canada, hides inside buds in winter and damages infected buds from inside. Contact insecticides generally don’t work and infected foliage must be destroyed.

Streak and rust are fungal diseases that affect the plant, both are somewhat similar although rust is the more serious problem. They appear as orange-yellow streaks and spots on the leaves during warm weather and might initially be considered chlorosis.

The easiest way to define what infection you are dealing with is by touching affected areas with a tissue or your finger. If an orange, powdery substance gets wiped off, then the problem is rust.

It can spread rapidly between plants although it is usually recommended to destroy any plant infected with rust, cutting down the infected foliage can help limit its spread. It can also be treated with copper fungicide. The streak is not as serious but infected foliage must be cut down and destroyed. Any remaining foliage can be cut down after flowering ends as well since streaks can overwinter among the leaves.