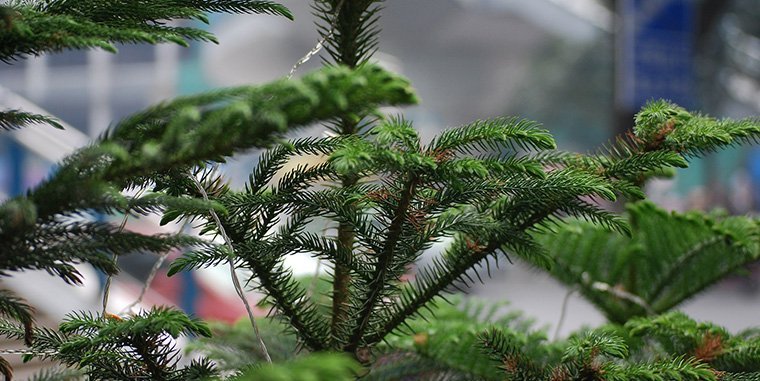 Araucaria heterophylla or Norfolk pine is a plant from the conifer family Araucariaceae. The tree is indigenous to Australia, specifically Norfolk Island. 13 related species of the genus is also found in New Caledonia but the pine is widely grown now for ornamental purposes.

Captain James Cook was the first to describe the tree during his second voyage exploring the South Pacific in HMS Resolution in 1774. He documented large forests of straight tall trees on Norfolk Island which seemingly could be used for masts and yards of sailing ships. However, when convicts from Britain occupied the island in 1788, it was deemed that these trees were not strong enough for that purpose.

During the late 1950s, a shipment of logs was delivered from Norfolk Island to Sydney, Australia for plywood manufacturers to try out with the notion of starting an industry to export timber. While excellent results were reported by the plywood companies, the Advisory Council for the territory decided that this wasn’t sustainable and focused on timber production for local use only. The wood is great for woodturning, with Hawaii artisans widely using timber from this pine, along with the comparable Cook pine.

It grows slowly, with gray-brown bark naturally falling off in scales, attaining a maximum height of 160–210 feet, with straight trunks despite the nonstop onshore winds that contort other species. Its branches are slightly oblique or horizontal, numbering five and forming floors, with each floor plane a perfect pentagon. If grown indoors, the tree stays small.

The distinct appearance of the tree, with its triangular, symmetrical outline and widely spaced branches has made this tree a popular species to be cultivated all over the world in areas of humid subtropical climates. When the tree becomes mature, its shape might become less symmetrical. It does well in sand, provided it is well watered when young. It is also tolerant of wind and salt, making it perfect for cultivation along coasts.

These pines are grown for horticultural use in south Florida and shipped out around November in time for Christmas. These plants are often lightly sprayed green paint to increase their appeal and this might weaken or kill the plant if it can’t photosynthesize properly. Some locations in subtropical Florida and deserts of the southern USA prohibit planting these trees as they can fall when struck by lightning.

While this species isn’t under threat due to all the commercial horticultural trade, the native population was always restricted and has reduced a lot since the 1700s. Poor land management, invasive species, and farming have reduced the population considerably on the Norfolk Island territory. The main remaining stands of trees are protected in the National Park of Norfolk Island now and are classified as vulnerable. Seedlings from this species are appearing in native coastal forests of New Zealand, in North Island, adding to the numerous invasive species or “Wilding Pines” that have become a huge problem.

Although these plants prefer full sun, they can also handle rather long periods (months) under dimmer conditions. So you can grow the potted plant indoors in winter and move it outdoors in summer.

When solely growing it indoors, it requires a bright and cool area for good growth. If the plant becomes gangly, this is due to the combination of dim light and heavy fertilizing. Cut down with the fertilizer until it gets better access to sunlight. Turning the plant frequently will ensure that all sides get enough light.

These plants are fairly drought- and salt-tolerant, so they are forgiving concerning watering. Water once in 1-2 weeks if growing indoors until water flows from the pot. It’s good practice to water it after the soil turns slightly dry.

These plants prefer growing in environments with around 50% humidity. Growing plants close to each other, regular misting, or using a humidifier are some options to raise relative humidity. Still, this plant adapts better to dry air indoors than other subtropical plants.

These plants love soils that are slightly acidic. A peat-based soil mixture is ideal since the mix will slowly acidify when the peat falls apart.

When it is planted outdoors, it prefers rich but sandy soil, amended with peat.

This plant only needs repotting when it gets root-bound or roots start appearing from the drainage hole. It isn’t a very fast grower when young, so repot it every other year. It will start growing faster as it matures, then it may need repotting every year.

Repot the plant in spring, and if it has become larger, make sure to include something heavy such as large rocks/pebbles in the soil to provide weight to prevent the plant from falling over. The newer pot should be slightly wider than the old one, with many drainage holes.

These plants naturally grow from seeds in their cones. While it’s also possible to propagate it from cuttings, the new plant will lack the symmetry of the branches that makes this plant so attractive.

Collect the seeds after they mature during late summer/early fall. You’ll have to break the spherical cones apart when they fall. Plant the seeds in a prepared pot that is 12 inches deep, a place near a shaded windowsill, and fill it with a mix of loam, sand, and peat. Insert the pointed part of a seed in the soil at an angle of 45° with the rounded part visible on the soil. Keep the soil damp. Seeds should sprout in 12 days after sowing, although it can also take almost six months, so be patient.

Use a liquid fertilizer all through its growing season. Don’t fertilize in winter or under low-light conditions.

Younger plants have weak root systems. Strengthen the roots by feeding them regularly and stake the plant if it needs support.

Remove dead or diseased branches. It is generally not good practice to prune the plant, but if it gets too big indoors, remove the central leader. This will make the plant branch out, and although it will lose its classic look, such pruning generally doesn’t affect its overall health.

Remove diseased or dead branches when growing them outdoors, but no other routine pruning is needed.

These plants are susceptible to pests such as scale aphids, mites, mealybugs, and whiteflies. Try and identify the type of infestation, treating it with less toxic solutions. It can also get a fungal disease such as anthracnose due to overwatering. This potentially can make entire portions of the tree become yellow, brown and eventually kill the plant.

Needles usually drop for two reasons- the plant is either over-watered or it’s not getting sufficient light.