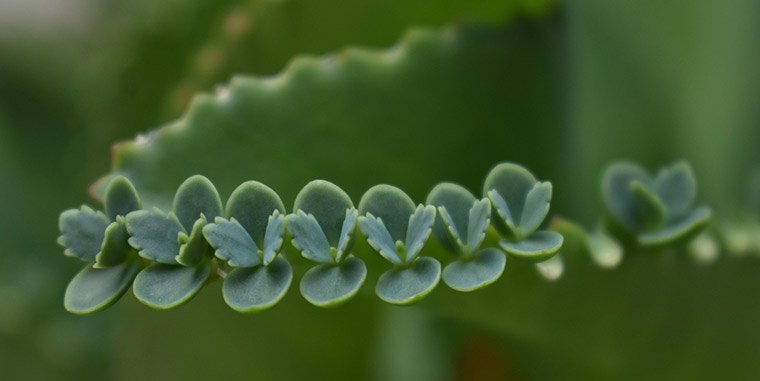 Kalanchoe daigremontiana or mother of thousands is indigenous to Madagascar and it is well-known for the ability to propagate itself like other species in the Kalanchoe genus. This succulent has been introduced in several areas of tropical and subtropical zones such as Florida, Puerto Rico, Venezuela, Uruguay, Argentina, Brazil, Hawaii, and some parts of southern Europe. It’s a naturally invasive plant and can threaten natural ecosystems. In the arid /semi-arid environments of South America and South Africa, it can potentially overwhelm native plant species.

This succulent plant grows from one stem and can grow between 18 to 35 inches if not cut back. Its blue-green leaves are narrow and pointed, growing about 6 inches in length and about 3 inches wide. The plant rarely flowers when grown indoors, although it will flower under the right conditions when grown outdoors.

The flowers are tubular and colored pink-lavender and hang over the plant. Only mature plants can bloom, usually in late fall/early winter if the climate isn’t cold. The plant dies after blooming, perpetuated by the many plantlets that start growing in its spot. The little plantlets grow along leaf edges and easily drop from the plant and take root anywhere.

It is for this very reason that many gardeners consider this plant to be a problem to cultivate, as the little plantlets can quickly overwhelm outdoor gardens and nearby pots if not actively monitored.

This plant requires plenty of light, although direct sunlight should be avoided in hotter months as its leaves can easily get sunburned. It can be exposed to direct sun during the cooler months of fall to early spring when the sun is not as sharp, so it gets lots of light every day.

You’ll know when the plant is getting the right amount of light as the leaves will be vivid green and have a lovely red outline.

If the plant isn’t getting sufficient light, it will become gangly and tall, with large spaces between leaves and the plant will look sparse and unhealthy.

Water the plant thoroughly every 2-4 days in summer and always use room temperature water since its roots are very sensitive to temperature and cold or hot water can “shock” the plant and cause damage. Water only the soil and avoid making the leaves wet as they are prone to leaf rot. Reduce watering in winter.

As a succulent, it can survive prolonged drought or neglect, although the plant shouldn’t dry out completely to the stage where it cannot be revived.

An average room humidity of around 40% is sufficient for this plant. However, it can survive under various ranges of humidity.

It grows best in temperatures between 65-75°F. During winter, if you’re using a heater, keep the plant from being exposed to direct heat. Direct heat will damage the leaves and dry the plant rapidly.

The plant is not frost-tolerant and will die in temperatures below freezing.

It thrives with well-drained sandy soil. A succulent/cactus mix is best, you can also combine coarse sand and regular potting soil to make a good soil mix. You could also improve the draining capacity of the soil by adding either perlite or pumice vermiculite.

Avoid soil mixes containing moss, humus, or loam. These types of mixes take time to dry and retain water around the roots.

When the plant becomes too large for its current home, it can be repotted to a little bigger pot. It’s easy to tell when the plant needs more space to grow – roots will get pot bound or start growing out from the drainage holes of the pot. Plants that are too large also begin to dry faster, even in cooler climates. Another indication for repotting is when foliage growth has stopped or slowed down significantly.

When it’s time for repotting the plant, fill about 1/3 of the new container with succulent or cactus soil mix or with your sandy soil mix, as mentioned above. Tamp down to settle the soil. Slide the plant from the current pot and remove any dead or rotted roots without damaging the healthy ones.

Place the Mother of Thousands in the center of the new container and add more soil to cover the roots, tamping down to compress it a little. Water it until water drains out from the pot.

Propagating this plant is simple and easy considering that you have ready-made little plantlets, ready to plant! Pick two or three healthy-looking plantlets from the leaves. Fill a small terracotta pot with succulent/cactus soil.

Push the root end of the plantlets lightly into the soil, spacing them out evenly. Mist the soil so it’s moist without getting saturated, placing the pot where there’s plenty of suns, and continue misting the soil regularly. Over-watering can cause them to rot. Mature plants don’t like plenty of humidity.

When they’re big enough they can be separated and planted in individual pots. Their roots are very tender and can get easily damaged when transplanting them.

Like any other plant, this one too might need pruning now and then. If the plant becomes wiry and gangly, cut off the tip of the plant above a leaf. This will make the plant produce leaves further down the stem. It typically prunes itself if a leaf is damaged or becomes too dry. You can remove any damaged or dead leaves yourself to keep the plant looking healthier.

When it is growing under ideal conditions of proper temperature and regular watering, it requires feeding or the leaves might show nutritional deficiencies such as stunted growth and lesions. Feed the plant once every three months with a diluted balanced liquid fertilizer, but only during March to September. Feeding isn’t necessary for winter as growth will be slower.

This plant is mainly vulnerable to overwatering. It can start wilting, with the leaves also curling, if it gets too much water. Under-watering this plant is much better – keep the soil just damp enough and the plant will be in good shape. Another cause for leaf curl might be due to insufficient light – move it to a place where it will get more hours of sunlight.

The biggest damage to the plant is from fungal root rot. This develops in conditions where the soil is over-watered and it can quickly kill the plant. Ensure the soil is well-draining and the pot has enough drainage holes.

Mealybugs, scale, or aphids are pests that will plague the plant on occasion. These pests love to attack the thick, juicy leaves.

Mist the plant regularly with neem oil to keep these pests away. Scale can be banished with rubbing alcohol.