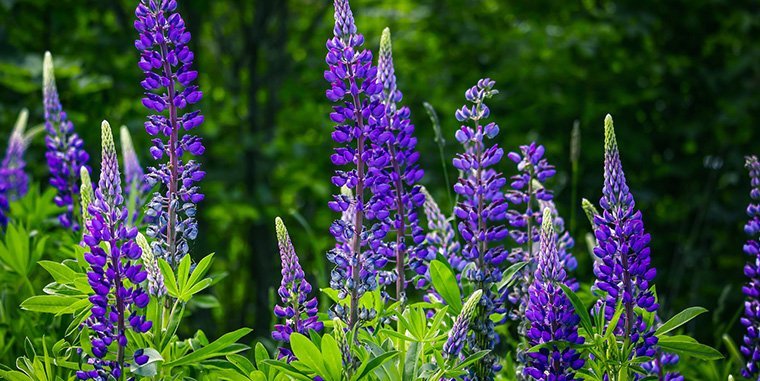 Lupine or lupinus, a genus from the Fabaceae family, are indigenous to North Africa, the Mediterranean, and both American continents.

The genus encompasses over 199 species, along with major centers of historical diversity in the Americas for more than 6,000 years. While they are cultivated widely in most areas, they are considered to be introduced to environmental threats in Nordic countries and the South Island of New Zealand.

Many species are perennials, with a few trees and annual species. Mostly reach heights of 1 – 5 feet, but some can grow 10 feet high, including one species L. jaimehintoniana in Mexico, which reaches up to 26 feet high.

Their pastel green or gray-green leaves are sometimes covered with silvery hair, with palmately divided leaf blades consisting of 5 – 28 leaflets, or just a single leaflet in some species in eastern South America and the southeastern United States.

The flowers are small (0.3 – 0.7 inches) and grow in dense or open circles on erect spikes, with colors varying in species pink, red, yellow, white, blue, purple, and bicolored. The shape of the flower has encouraged common names like quaker or bluebonnets.

The fruit pod contains several seeds. They’re best planted during the start of spring, however new plants, cuttings, or seeds can be started later in spring or autumn.

Being members of the pea/legume family, they fix nitrogen through the Bradyrhizobium bacteria growing around their roots, fertilizing the soil companion planted among other plants.

This also helps them to tolerate infertile soils and can rehabilitate and change barren and low-quality soils. They are important food plants for the larvae of many butterflies and moths.

They were introduced in Europe in the late 1700s. Most hybrids of the modern era result from a breeding program by Alfred Russell in the early part of the 20th century.

L. polyphyllus (garden lupin) and L. arboreus (tree lupin), are popularly grown as ornamentals in gardens and are the foundation for several cultivars and hybrids with a wide variety of colors, including bi-colors.

However, certain species (L. arboreus and L. polyphyllus), escaped from gardens and became invasive in some countries, growing wild along roads and streams in New Zealand, Norway, and Finland.

They make wonderful plants to grow in garden borders, although some taller varieties could require staking to stop them from flopping. When growing in suitable conditions, they require little or no maintenance. Deadhead faded flowers will encourage more flowering.

They prefer growing under direct sun for a minimum of 6 hours daily to grow and flower at their best. While they can also grow under some shade, this will reduce flowering; however, afternoon shade would be ideal in hot summers.

If you grow them in complete shade, they won’t flower at all. Trim down neighboring plants and trees to let the sun get to the plants.

They don’t like wet/soggy soil, which could cause root rot, but they prefer to be regularly watered. Water them weekly to stop the soil from drying and water the plants a bit more frequently in periods of hot, dry weather.

They do poorly in hot, humid weather, like much of the Southern US, and prefer moderate to average humidity levels.

The ideal temperature ranges between 20 – 85°F. They love climates with rather cool summers. Strong heat and sunlight will stop the plants from flowering. Apply mulch in hot climates to retain moisture and cool the roots. They can tolerate high temperatures if they grow in semi-shade and if they are regularly watered to stop the soil from drying.

They grow nicely in deep large containers and need repotting once roots emerge from the bottom, be careful when repotting as their roots shouldn’t be disturbed. Use a deeper and larger container with good drainage and rich loam-based soil mixed with a little sand to improve drainage and water the plant well after repotting.

Because they grow very easily from seed, this is usually the preferred method for propagating them. If you want a clone of the parent, you have to divide the plant or take base cuttings during spring.

Starting these plants from seed is easy however, perennials grown from seeds probably won’t flower until the second year. Try to use biodegradable peat pots that are easily planted along with the seedlings, since these plants don’t like having their roots disturbed.

The seed coats are tough, so you will have better success in germination if you scratch the seed coating or soak them with water for one night. Sow the seeds in the garden under full sun. Germination will occur in 14 – 30 days.

Carefully take base cuttings from mature, established plants in spring before active growth starts with a sharp knife to separate part of the roots and crown and transplant it into another location.

This is better done every 2 or 3 years since they are short-lived and basal propagation will make certain that you have a continuous stock of these plants. Plant the cuttings in a mixture of loamy compost and sand in an unheated greenhouse or under-protected semi-shade.

They don’t need feeding since they can tolerate poor soil and can fix nitrogen from the atmosphere via the Bradyrhizobium bacteria growing around their roots.

These plants are susceptible to several diseases and pests. Aphids commonly attack in spring and so do snails and slugs. Control aphids with insecticidal soap or neem oil, pick off snails and slugs manually, and dispose of them in soapy water.

Brown spot fungus creates brown patches on leaves and foliage. Infected plants have to be destroyed and avoid growing lupines in the same location for a few years until the spores die off in time. Additionally, powdery mildew can infect these plants when they don’t have good air circulation and appear on foliage as white, powdery blotches. Use fungicides to treat the plants and remove infected foliage.