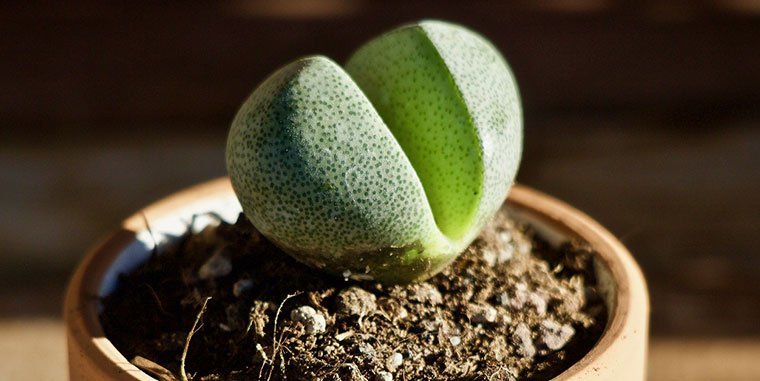 Lithops, a genus of succulents from the Aizoaceae ice plant family are indigenous to southern Africa, from sea level to mountains. The name is a mashup of two Ancient Greek words for “stone” and “face” that describes the appearance of these plants that helps them avoid getting consumed by animals by merging with rocks and pebbles that surround them, hence their common name of pebble plants or living stones.

The genus was initially scientifically described by William Burchell, a famous artist and botanist in 1811 when he was exploring South Africa, naming it Mesembryanthemum turbiniforme. The plant in the genus was relatively unknown and not studied in detail taxonomically until Desmond & Naureen Cole started studying them in the 1950s.

They collected around 400 samples of the plant from almost all the native habitats of these plants, documenting, identifying, and classifying them by special “Cole” numbers that are still used today. The revision and studies of the genus were published in a comprehensive book named Lithops: Flowering Stones in 1988 that described the entire species, subspecies, and all the varieties which still stands as a definitive and widely accepted study today.

As their effective camouflage works very well, new varieties are continued to be found, in many remote areas of Namibia and South Africa, including populated areas because their camouflage effectively hid them for many years.

Some of the recent species discovered are Lithops coleorum found in 1994, Lithops hermetica found in 2000, and Lithops amicorum that was found in 2006. Nearly a thousand different populations have been documented, with each covering just small areas of grasslands, veldts, or rocky ground. Different species prefer particular types of environments and usually restrict themselves to particular types of rock, the genus has not been naturalized outside their native habitats.

Rainfall in their habitats ranges from about 700 mm each year to almost zero, with rainfall ranging from either mainly summer or winter rain, with some species depending almost completely on dew for moisture. Temperatures in their habitats are generally hot in the summertime and cool to cold during winter, but one species that grows along the coast has typically moderate temperatures throughout the year.

These slow-growing plants typically grow close to the ground and most usually have a pair of thick leaves with partial or total translucent leaf windows on top of their leaves. The stems mostly grow under the soil along with their long roots. Every spring a new set of leaves replace the old leaves that dry and die off.

The flowers of all plant species of the genus are either white or yellow daisy-like and largely fragrant that appear between the leaves in autumn or winter. The leaves often shrink and vanish underground in periods of drought.

The leaves of this genus have the most amazing coloring adaptation, with patterns of different shades of gray, cream, and brown, with darker areas, red lines, and dots, specific to local conditions and species. These markings play a role to camouflage the plants in their usual stone-like habitats as with all window plants, green tissue coats the insides of the leaves, covered with translucent material under the leaf windows.

Lithops need to be pollinated from separate plants. The fruit is a dry casing that opens up after it becomes wet, ejecting some seeds by falling raindrops and re-closes after it dries out. The fruit capsules can also detach and distribute intact, or disintegrate after some time.

These plants have become popular as house plants and several succulent growers maintain nice collections, seeds and plants are usually available in shops and can also be ordered on the Internet. These plants are rather easy to cultivate and maintain if provided with enough sun and grown in well-drained soil.

Normal care in mild temperate conditions is to not water them during winter, only watering after the old leaves shrivel up and have been substituted by a pair of new leaves. In hotter climates, Lithops become dormant in summer when they must be kept generally dry, requiring some watering in winter. In tropical conditions, they can be grown mainly during winter with a period of summer dormancy; however, in all climatic conditions, they are most active and need watering in autumn, with each species flowering almost simultaneously.

These plants prefer sun throughout the year, at least around six hours of sunlight every day. Keep the plants next to the brightest window of your house when growing them indoors, with an east or southern orientation to the sun being preferable. Insufficient light might cause poor coloring and elongated leaves. Plants given enough strong light will form hard and strongly colored leaves, making them resistant to rot and damage.

They should be watered according to the seasonal rainfall that follows their native habitats. Don’t water them during their winter dormancy. Then, when the new leaves form in spring, water only after the soil becomes dry enough, keeping the soil just slightly moist and stop watering again in summer when the plant experiences its other dormant period, resuming watering in autumn just before the plant flowers. If you notice the leaves starting to become very shriveled when the plant becomes dormant, you can give the plant a very small drink of water to get the leaves to plump up again, be careful as persistent overwatering can be fatal as they are sensitive to water in hot weather, which can make the plants rot.

Humidity usually isn’t a problem just as long as the soil doesn’t stay damp for long and the plant has good air circulation.

These plants generally can tolerate heat and temperatures of 50°F. They grow well in typical indoor temperatures between 65-80°F. However, excessive heat can kill potted plants since they can’t cool off by transpiration and depend on being buried in cool soil under the surface. These plants often become dormant when the temperature rises in summer, doing much of their growth in the cooler months.

These plants grow best in coarse, well-draining soil. Soil that retains water will make the plants burst as they can over-expand. Sandy soil with excellent drainage or a potting mix specially meant for cacti/succulents is suitable for them.

Although these plants only grow about an inch high from the soil, they need a well-draining pot that’s about 3-5 inches deep to accommodate their long taproots that can stretch deep down in the soil, an unglazed clay pot is a perfect choice as excess water can evaporate from the walls.

Since these plants are slow-growers, you most likely won’t have to repot them for several years. However, if you have many plants growing in a pot in cramped conditions, you can carefully dig up individual plants without damaging the roots and repot them in new pots that are deeper than the root length filled with fresh cacti/succulent potting mix.

Propagation of these plants is accomplished from seed or cuttings. Cuttings are usually obtained from existing plants that have divided naturally to create multiple heads, so generally, most propagation is done by seed. They can easily be hand-pollinated if you have two similar plants, although the seed will ripen 9 months later.

Seeds can be purchased online or from stores and are easy to germinate. Prepare a pot of cacti/succulent soil and water it well. When the soil has completely drained out, sprinkle the seeds evenly on top and lightly cover them with soil. Keep lightly moistened until germination begins, and then slowly resume the recommended watering frequency. Seedlings are usually small need some care during the first year or so, and will not bloom until they are 2 or 3 years old.

The division might find you waiting several years until the plants start developing into clusters. Carefully lift out the plant from the pot and cut carefully through the roots, making sure each separate part possesses a viable taproot. Repot each new division into pots that are deep enough for the taproots to grow without restriction.

These plants naturally live in sandy soil and are not heavy feeders, so they don’t need to be fed.

If the plant isn’t receiving sufficient light, the leaves tend to stretch and warp to reach sunlight instead of their natural propensity for growing flat on the soil. If your plant is suffering from this condition, try to ensure that it gets regular and sufficient light. Light is essential for good leaf development and helps prevent rot.

Desiccation or shriveling of the leaves often happens if the plant is thirsty. If you notice the leaves starting to develop the appearance of a wrinkled raisin, you have to give it a drink, and it will plump up in a day or so.

Sometimes, damage/scratches on the leaves can cause brown or white scars similar to scratches on human skin. Unfortunately, these scars won’t disappear until new leaves develop and the old leaves die away.

These plants are relatively pest-free although a few can attack the plant under adverse conditions. Spider mites are usually the most common problem, living in the leaf crevices or hiding between old leaves and new ones. They can cause spots of white scars on leaves and they tend to thrive in dry conditions using a fine spray of miticide on the sides and joints of the leaves to protect the plant.

Thrips, scale, mealybugs, and aphids can also attack your plant, hiding between the old and new leaves and scarring the new leaves. A bar of insecticidal soap will eliminate them.

Overwatering, scratching, or leaf damage from a cold temperature below 40°F can cause the leaves to expand and burst and cause rotting and infection. Generally, avoid scratching or damaging your plants and follow the watering recommendations and you will prevent any diseases.