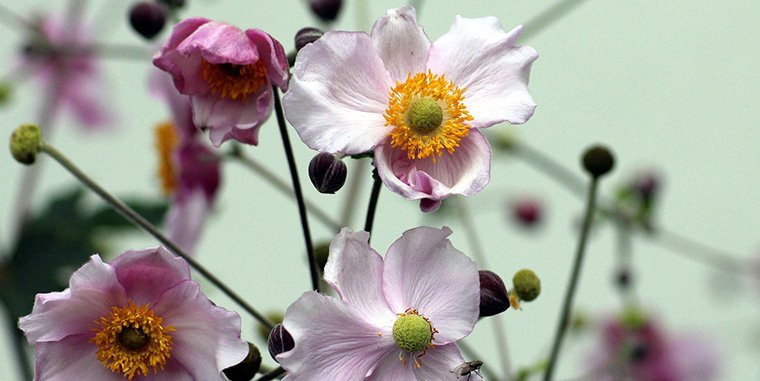 Eriocapitella japonica, a perennial species of plant belonging to the (buttercup) Ranunculaceae family is indigenous to Asia, specifically China.

The epithet “japonica” or from Japan is misleading since the species was introduced and naturalized in Japan hundreds of years ago when a variety of E. hupehensis escaped from human cultivation and spread from China into Japan and Korea and is now naturalized in Europe and North America.

It was labeled by Carl Thunberg who collected dried specimens from Japan in 1784. The botanical explorer Robert Fortune found this variety in 1843, growing in a graveyard in Shanghai, and sent it to England where it was named E. japonica or the Japanese anemone. E. japonica was first described by Takenoshin Nakai in 1941.

European cultivators bred E. japonica with E. vitifolia to develop hybrid varieties of E. × hybrida. Like other species of the Eriocapitella genus, this species was formerly classified as belonging to the member of the Anemone genus before being reclassified as a separate genus, although it is still thought by some to still belong to the Anemone genus since they share the common name.

This perennial plant grows 3 – 4 feet high and about 2 – 3 feet wide however, it can spread rapidly through its fibrous roots, the glossy divided leaves are alternate or whorled and are lobed, ternate, and toothed. The cyme inflorescence has flowers rising on stalks from a circle of leaves encircling the tips of the stems.

The saucer-shaped flowers are around 2 – 3 inches across, with colors including pink, white, yellow-green, purple, or red. It flowers from July to October in its natural habitat the plant gets its common name as the delicate flowers are opened by the wind that also buffs away dead petals. The fruits are small silky achenes.

This plant is salt tolerant, attracts butterflies, and is rabbit and deer resistant. It is commonly used in flower arrangements and wedding bouquets and is a favorite among gardeners and landscaping specialists.

It can be grown in borders, plant beds, closely around trees, woodlands, grown alongside azaleas and rhododendrons to create a nice design, or simply take advantage of their spreading habit (the pink-purple variety more than the white variety) and provide space for the plant to grow and spread in a mass of color.

It thrives well in full sunlight although it can survive partial shade. Growth can get leggy with too much shade in hot summers, allowing them just 2-6 hours under the full sun every day to stop them from wilting.

It needs average regular watering but doesn’t overwater – the soil should be evenly moist, not water-logged.

It prefers average to moderate humidity.

It thrives well in temperatures between 70 – 80°F and is winter hardy in zones 4 to 8. In winters up north, it is essential to move it indoors for overwintering, with temperatures above 32°F.

This plant likes rich sandy loam and well-draining soil, but it can also become invasive in these conditions, encircling and crowding other plants.

This plant can be grown in containers and should be repotted when it becomes crowded. This can happen very soon, particularly if growing conditions are suitable since it can spread rapidly.

The container has to be well-draining and big enough to house the plant while providing it with room to spread. After repotting, fill the new container using fresh and suitable soil, leaving 2 or 3 inches free of soil at the top, and water it well.

The seeds have a short lifespan and should be sown soon after harvesting them. Rub the seeds with sand as the hairy seeds will bond together in a group, then soak them in warm water at least 48 hours before sowing.

Press the seeds on the planting medium and cover lightly with soil. Keep the medium moist until germination occurs, usually within 30 days.

Divide the plant during spring – dig up a large plant and divide the root clump into 2 or 3 sections before planting the new divisions, improve the soil in the selected area with compost and water thoroughly afterward.

This plant is not a heavy feeder and only needs feeding twice yearly – in spring and then in fall with fertilizer or rich compost tea.

Deadheading flowers in autumn and removing old foliage in spring will encourage new growth to emerge. While it will help the plant appear neater, it won’t encourage flowering.

This plant grows prolifically and has to be kept in check otherwise it will become a nuisance and take over the garden. It also tends to get leggy and has to be staked and protected from strong wind.

Pests that commonly affect this plant include caterpillars, weevils, slugs, and flea beetles. Flea beetles are small beetles with colors ranging from green, brown or black, with some having colored spots.

They can jump to other plants just like fleas and inflict small holes in the foliage when they feed.

The larvae also attack the roots that cause weakness and make plants susceptible to diseases and other Mulch the soil to prevent weeds that help encourage the larvae and stop them from climbing up the plants from the ground when they become adults.

Crop rotation and removing dead plant material will also help discourage them and prevent them from overwintering.

Caterpillars damage the plants and are usually active from spring to fall. Neem oil will deter and control them, handpick them and kill them in soapy water.

Leaf spots can infect the leaves and initiate small round spots that expand irregularly into bigger spots, changing from red-brown to black-brown with gray-brown centers. Remove diseased leaves and spray the plant with a fungicide.

Over-watering and poorly draining soil can often cause root rot, damaging the roots and affecting growth, remove and replant in fresh soil with good draining capacity amended with sand or perlite and follow the recommended watering schedule. The soil must be damp enough but not sodden.