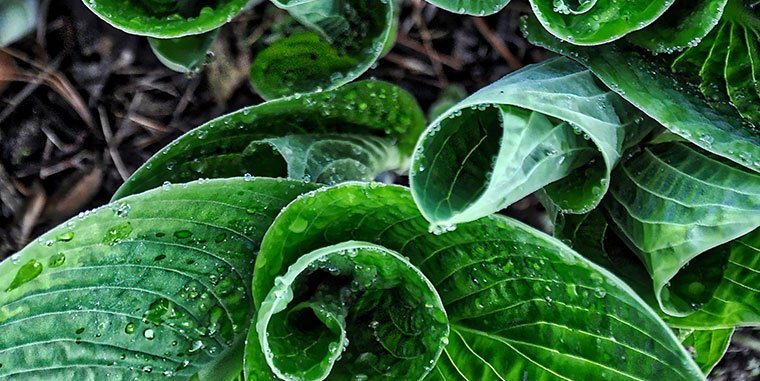 Hosta, also called plantain lily, a genus from the Asparagaceae family (subfamily Agavoideae), is indigenous to northeast Asia. Leopold Trattinnick, an Austrian botanist named the genus after Nicholas Host in 1812.

Hostas are clump-forming perennial herbaceous plants that grow from rhizomatous roots. The broad leaves are lance- or ovate-shaped that vary in size from 1–18 inches long and 0.75–12 inches wide depending on the species.

The heights of different cultivars also vary greatly, with some ranging from less than 3 inches high to more than 4 feet high. The colors of leaves of wild species are normally green, although some color variegation does occur among cultivated varieties.

The flowers grow on tall, upright woody stalks in terminal clusters that remain throughout winter. The flowers are typically pendulous, about 0.75–2 inches long with 6 tepals, come in white, violet, or lavender, and are usually odorless.

The only species that has strongly fragrant flowers is H. plantaginea, which produces white flowers almost four inches long – it’s also unusual as the flowers open in the evenings and close when morning comes. This species flowers in summer and some call it the “August Lily”.

Hostas are widely grown as they can tolerate shade and provide a nice focal point with their foliage. These winter-hardy plants are long-lived perennials that can grow in USDA Zones 3 – 8.

While H. plantaginea originates from China, most modern plant species were introduced to Europe from Japan in the 1800s. Hybridization has produced several cultivars, with more than 6,100 registered varieties, and possibly many more that have not been registered as yet.

Some cultivars with gold or white variegation are particularly prized, other popular cultivars include Gold Standard, France, Undulata, June, and Sum, and Substance newer, fragranced cultivars like ‘Guacamole’ have also become popular.

Hostas have become popular perennials in American gardens as they can thrive in shaded locations and are very easy to maintain and propagate. There are several hundred cultivars, ranging from fast to medium to slow-growing varieties. Smaller varieties usually grow fastest and can attain maturity in 3 to 5 years while larger varieties can take 5 to 7 years.

While they are commonly thought of as shade plants, they are partial sun plants, as they require some sunlight to thrive. Varieties with yellow leaves can tolerate more sun, but no plant in the genus will thrive in continuously hot and sunny locations.

They need at least 6 weeks of temperatures below 42°F to enter dormancy to reset their growing cycle. While this occurs naturally outdoors in most areas it is challenging when trying to grow them indoors you can try storing them in garages, basements, or even in refrigerators to ensure dormancy, with temperatures between 33 and 41°F so the plants will not freeze.

Hostas are generally categorized by size:

These plants thrive under full shade, but they should get some sunlight every day. Plants with green and yellow variegation in their leaves benefit from some exposure in the morning to help enhance their yellow coloring.

If brown tips develop or if the color seems faded or dull on the leaves, it could be an indication that the plant might be getting too much exposure to sunlight.

These plants need just enough watering to dampen but not drench the soil. They can tolerate occasional dry spells once established, but they won’t survive long periods without water.

These plants can tolerate varied types of humid conditions.

They are not particular about temperature and can survive temperature lows of -40°F when planted outdoors, although they need protection from strong winds and hot summers.

They do well in Hardiness Zones 3 – 10. Average indoor temperatures are good for indoor plants, provided they can get a cool period in winter to achieve dormancy.

They can tolerate most types of well-draining soil, except clay since it retains too much water. They also prefer rich and fertile soil. For potted plants, use a regular commercial mix that drains well.

If necessary, they can be repotted in spring, particularly if the plants spread too much but generally, most varieties can grow in their containers for several years without having to be repotted. Container plants are subject to temperature fluctuations, particularly in winter, so you might have to protect them in cold-weather areas.

These plants are very easy to propagate by dividing them. In autumn or spring, dig up the plant from the soil with a sharp shovel/spade. Split apart the root ball into separate segments with your hands or use an appropriate tool if the root clump is too tough to separate.

Each new segment should have a few leaves, but a small bit of rhizomatous root will usually produce new shoots. Plant the separated segments in a location of your choice

While it is possible to propagate Hostas from seeds, many are hybrids that will not “grow true” from seeds. In addition, some varieties are sterile and won’t produce seeds. If you still want to try growing them from seeds, collect the seed pods and allow them to dry before opening them.

Seeds can be germinated in containers of a commercial potting mix by lightly covering them with potting mix and placed in a warm spot. Mist the soil often until germination starts in about three weeks. After germination, move the plants to a slightly cooler area under indirect sunlight until you decide to transplant them outside or to bigger containers.

The best way to feed these plants is to add a layer of quality compost in spring – remove a few inches of topsoil and replace it with fresh compost. You can also feed them with a balanced fertilizer, applied when planting or when new growth emerges in spring, but avoid getting fertilizer granules on the leaves.

While some gardeners like to remove flower stalks as they appear, others value the flowers that also attract bees and other insect pollinators. Dead/faded flowers can be removed after they wither and die.

These plants can be attacked by snails or slugs that chew holes in leaves, often killing plants if not treated. Use suitable baits or traps to deal with these pests.

Several viruses can also attack these plants. Remove and destroy infected plants to stop their spread.

Anthracnose is a serious fungal disease that can affect hosta plants and commonly appears in warm and wet weather. Infected plants will display leaves with big irregular areas surrounded by dark edges. Fungicide spray applied in the spring might help prevent the disease. Infected plants must be removed immediately.

Brown, withered edges on leaves are typically caused by the excess sun. Provide some shade during hot summers, affected leaves can be pruned away and will soon be replaced by new leaves.

Sometimes the foliage can turn yellow, along with stunted growth. This is often due to crown rot from too much watering. Affected plants might have to be removed if the damage is too bad.