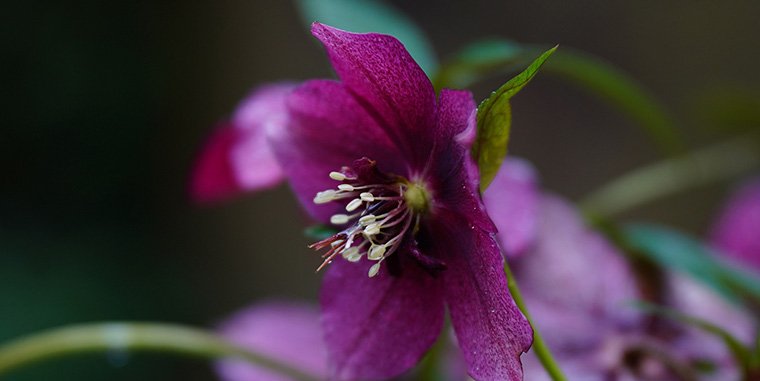 Helleborus orientalis (Lenten rose), a perennial flowering species of hellebore from the (buttercup) Ranunculaceae family, is indigenous to Turkey and Greece. The species was described by Jean-Baptiste Lamarck in 1789 who gave it the current name of Helleborus orientalis or Hellébore du Levant.

It is classified within the Helleborastrum section of the Helleborus genus and is closely connected with the other 8 species within the section, all these species are highly variable and freely breed and produce hybrids with each other.

These perennials reach their mature height of 11–18 inches in 2 – 5 years. The palmate glossy green leaves are composed of 7 – 9 leaflets having serrated leaf margins. The flowers begin blooming from winter until spring, producing large cup-shaped, white to red-black flowers, often with streaks, freckles, or other patterns with a large mass of light yellow stamens. The flowers arise in clusters of 1 – 4 on thick stems that grow above the foliage.

German breeders started developing H. orientalis in the 1800s, enriched by new species from the Botanical Gardens of St. Petersburg.

New varieties were later introduced in England and interest in the genus peaked during the late 19th century, but soon fell out of favor by the 1920s. However, Helen Ballard revived the species and developed many new varieties in the 1960s. Cultivated varieties come in colors like white, green, yellow, pink to maroon, and purple or speckled flowers.

In warm locations, H. orientalis can flower outdoors around Christmas. In colder areas, they will push through the frozen ground in early spring. Their foliage is attractive all through summer, so they are suitable for growing even if not flowering.

These plants prefer partial or full shade during summer but need extra sunlight in winter. The perfect location for growing them is beneath deciduous trees where they can avail of the shade of their foliage in summer but get exposed to the sun when the leaves of these trees drop in autumn.

These plants like a bit of moisture, but don’t like to sit in wet soil for too long or they will start rotting; however, they will tolerate drier soil once they get established.

They prefer moderate to average humidity.

They grow well with night-time temperatures of 40 – 45°F and 60 – 65°F in the day. Hardiness varies with species, but most are hardy in zones 3 to 9. In colder weather, protect them from harsh winds in winter.

They grow better in well-draining soil rich in organic matter and prefer neutral or alkaline soil. Before you amend the soil, conduct a soil test to evaluate pH levels and nutrient capacity, if necessary.

These deep-rooted plants should be potted in a container with good depth and a wider top than the base to help in easily removing the plants when they need repotting once every two years.

Select a slightly bigger, well-draining container than the existing one so the plant has room to grow and won’t get waterlogged. Use a good loam-based soil, with extra grit to aid drainage. Place the container where you can see it from indoors when it is flowering, later moving it to a shady location in summer.

Many varieties will reseed to form colonies of themselves, but hybrids often produce seeds that won’t look like the parent plant, resembling one of the parent varieties and not the hybrid.

The seeds will not be viable for very long so always use freshly harvested seeds. If they are kept too long before sowing, they will form a tough coating and become dormant for a year or so before they come out of dormancy.

Stored seeds have to get stratified before planting this occurs naturally outdoors, but if you start seeds indoors, it will require some skill. First, soak them in hot water for one day or two, until they start swelling.

Then, plant them in containers of potting soil and keep the containers at around 70°F for 6 weeks. Then, reduce the temperature to about 50°F degrees Fahrenheit. They will germinate within 4 or 6 weeks, and plants grown from seed might take around three years to become mature.

However, fresh seeds can be scattered in containers and kept outdoors all through summer. Keep watering them regularly and germination will transpire in either fall or the following spring.

Divide these plants in winter before the flowering season starts. Dig up the entire plant and wash away the soil to identify where the buds are located on the crown and split the clump apart, ensuring each new division has a minimum of 2 buds.

Add organic-rich compost in the soil when you first plant them, then another layer during spring, and again in fall. Supplemental fertilizer isn’t needed if your soil is rich.

The best time for pruning is when new growth starts emerging on the plants in winter or spring. This new growth will grow between older foliage. When this happens, remove old growth as close as the plant’s base. Deadhead old and faded flower stalks

They are winter-hardy, requiring very little attention during harsh winters, and usually, bounce back in spring.

These plants are only bothered by aphids, affected parts can be removed, then further infestations are prevented with insecticidal soap and neem oil.

The common diseases that plague these plants are usually fungal – downy mildew and leaf spot, which are treated by fungicides when the infection is too much.

One very serious disease that carries an ominous name of “Black Death” causes stunting and black streaking. The culprit is the net necrosis virus, usually transmitted by aphids. The only remedy is to destroy the plant when it gets infected. Treat aphids immediately to stop this disease from spreading.

Some species are slow to grow and could require two years before they bloom. Blooming could also be delayed if the young plant has been forced to bloom very early. Flowering depends on both the species and your climate.

Most species usually bloom between December and April and stay blooming for a little longer. Don’t feed them with fertilizers high in nitrogen as this can result in beautiful foliage but fewer blooms.