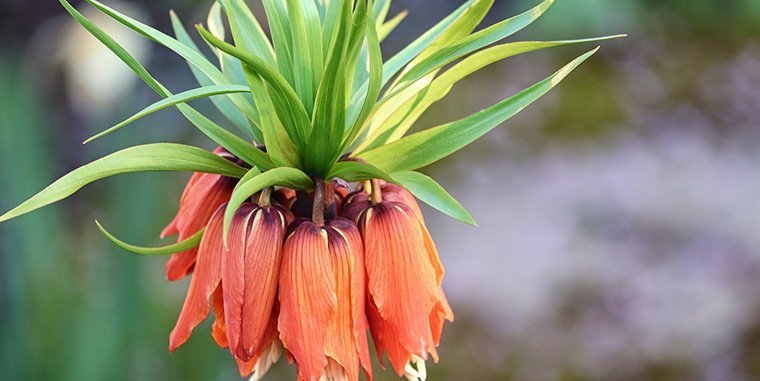 Fritillaria, a genus of perennial plants from the Liliaceae (lily) family has around 130–140 species distributed between eight subgenera. The first species scientifically written about in Europe was Fritillaria meleagris in the 1500s, while further species from Asia and the Middle East also being introduced to Europe around the same time.

The genus is distributed among many temperate zones around the Northern Hemisphere, mostly in places with dry summer climates.

These perennials grow about 6 inches – to 4 feet high. All species have bell-shaped flowers, usually hanging down from the tips of upright stems that come in yellow, orange, and bronze.

The leaves are narrow; they grow from button-shaped bulbs that can be 2 to 8 inches or more in size, with some species spreading naturally from offsets.

The flowering season usually lasts from March until May. They are pollinated by insects such as wasps and bumblebees.

These plants naturally grow in diverse habitats, so each species has different growing conditions to grow properly. Some thrive in harsh environments on high mountains, while others grow in low altitudes in meadows.

The flowers appear in texts of several notable 16th-century European botanists, including a poem by Shakespeare, and were also depicted in paintings by Dutch painters in the 1600s. The flowers are used as floral emblems of several countries, regions, and organizations.

Several species are commercially cultivated as ornamental plants with many species and cultivars now commercially.

Several species are endangered from over-harvesting, habitat encroachment, overgrazing, and demand for herbal medicine. However, one species, F. delavayi, has started evolving by growing brown-gray flowers to camouflage itself from humans in its natural habitat.

Over-picking has significantly decreased this species and while there’s no difference between flowers grown commercially or those growing wild.

The bulbs of several species smell rancid or skunk-like which helps repel rodents.

These plants can grow either under full sun or under shade, depending on the species you’re growing. Make sure to check the growing needs of your plant carefully.

These spring-flowering plants prefer fairly dry growing conditions, particularly in summer. They need slightly more watering when they are in their growing period and as long as the soil drains well. After the foliage dies, continue watering them but less often to ensure that the bulbs don’t start rotting in winter.

They prefer low to average levels of humidity.

Most species are hardy in zones 5a to 8b, surviving temperatures well below 15°F. They prefer temperatures between 45 – 85°F.

They grow well in well-draining soil that is high in organic matter. However, using compost that is completely decomposed as improperly decomposed compost could spread fungal diseases like botrytis blight and might have pests that can cause damage.

Drainage can be improved by cultivating the plants in raised beds to help water drain faster. Alternatively, you can grow them in containers of sandy soil amended with loam, but kept dry and shaded during summer.

Repot potted plants every two years when the plant goes dormant. Remove the bulbs and separate any offsets and replant them in moist, well-draining soil.

They can be propagated from seeds or offsets, sow seeds in autumn in a seed tray. When they germinate, gently remove the seedlings when they are large enough and replant them into individual containers two years before transplanting them outdoors.

Alternatively, dig up the bulbs when the plant becomes dormant and separate offset growing around the main bulb and replant them in the garden or containers. Their roots will start developing in autumn and they will flower in spring.

They can be fertilized 3 times a year – first when planting in autumn to help the roots grow, second when foliage emerges in spring, and lastly when the flowers fade to help feed the bulb.

Cutaway spent flowers and let the foliage grow until it dries completely to help the bulbs store energy to regenerate in spring. When that happens, remove all the dead foliage.

You can also dig up the bulbs and store them in a cold, dry place under low humidity, away from frost and sunlight at temperatures of 50 – 70°F. Poor conditions while storing the bulbs will dry them out, or make them moldy. However, the bulbs really won’t tolerate being stored so it’s best to keep them in the ground or plant them immediately if you dig them up.

One other issue to know when growing these plants, sometimes the bulbs will produce foliage but won’t flower. This could be for any number of reasons and the only solution is to plant extra bulbs so you won’t end up being disappointed.

While they are relatively free from trouble, they belong to the lily family and are susceptible to the lily beetle. These voracious pests feed on the plants and cause some damage. The best solution to protect the plants is to manually remove the beetles when they’re spotted.

Slugs and snails also enjoy munching on the foliage so use slug repellents or scatter used coffee grounds near the plants as a deterrent.

Sometimes gardeners resort to “forcing” the bulbs to get them to flower in spring, particularly in climates with warm winters. They plant them in pots around mid-October and chill them in a dark room at temperatures between 38 – 45°F, moderately watering them for 6 – 8 weeks.

They then bring out the pots into increasingly stronger sunlight. The bulbs will grow and bloom in four weeks however, forcing the bulbs will reduce their vitality and they will not grow again.