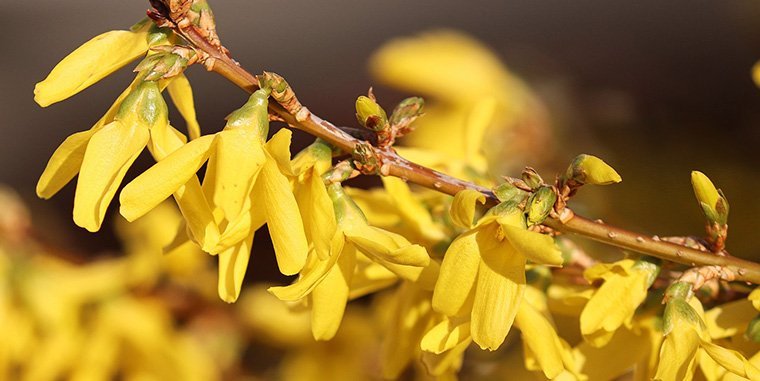 Forsythia, a genus of plants from the olive Oleaceae family, contains 11 species, mostly from Asia, except for one species indigenous to Europe. The species was first noticed in Japan by Carl Thunberg, a botanist-surgeon who described the species, F. suspensa, in his book Flora Japonica published in 1784. F. viridissima and F. suspensa were introduced to Europe in the 1800s. These two species formed the base for the various hybrids that have been developed since then.

These deciduous shrubs usually grow to heights of 3 –10 feet, occasionally almost 20 feet. They have rough grayish-brown bark with 1 – 6 inch leaves growing on hollow or chambered branches, some varieties only grow a few feet tall, while larger varieties often reach more than 10 feet high and wide.

They are fast-growing and low-maintenance shrubs with an arching, upright shape that grow almost 24 inches a year. Their long branches are covered with brilliant four-lobed yellow flowers early in spring long before the leaves emerge, with the flowers drooping in rainy weather to shield their reproductive parts. The fruit is about 1/3 inch in size and contains numerous winged seeds.

Many varieties have been developed within the genus, in different sizes and shapes some tolerate cold better, others produce larger flowers, and some are dwarves, while others are more resistant to pests and diseases.

These tough and reliable plants are commonly planted in late autumn or early spring before they emerge from dormancy, although they can be planted in winter in frost-free climates. They are popular flowering shrubs in early spring in parks and gardens, attracting bees and butterflies.

They are frequently used to form privacy walls after all the leaves appear in summer and fall. They can also be used to control erosion on slopes and F. suspense, the weeping variety, can also be grown like a vine on trellises.

These plants can grow in poor garden soil and are somewhat drought-tolerant once they get established, the biggest problem when growing these fast-growing plants is keeping them pruned to maintain their shape and size but this can be overlooked if you prefer a slightly wild-looking plant, as many do. Unpruned plants naturally look good when grown in borders along with wooded areas.

These plants grow better when they get about 6 hours of daily direct sunlight. They won’t produce many flowers if they get less sun.

They thrive in temperatures of 55 – 75°F and can tolerate cold, unless the temperature drops below -5°F in winter. This can cause damage and affect their ability to bloom in spring typically, they do well in zones 5 – 8. Northern gardeners should choose a hardy variety that can tolerate weather conditions in their area.

They like well-drained soil of any kind and can tolerate clayey soil, as well. They are also not picky about soil pH levels.

Repotting these plants is necessary every 3 years due to their fast growth. Look for dwarf varieties when choosing container plants however, most plants do not grow or spread as big as they do in gardens. In addition, most of the varieties (other than the cold-hardy ones) are sensitive to lower winter temperatures, so those living in northern climates should either get hardier varieties or grow them in containers, bringing them indoors in winter.

You can either repot in spring when the flowers fade or in autumn when the plant usually goes dormant. Note: you can tie the branches if they have spread too much with a rope for easy handling. First, prepare a soil mixture amended with some compost that drains fast.

Choose a larger new container, ease the plant from its home and remove much of the old soil. Cover the drainage holes with gravel and add some soil. Place the plant inside, add soil to fill the empty spaces, and water them well to settle the soil. Add more soil if necessary.

Several methods can be used in propagating these plants – from seeds, cuttings, layering, or air-layering. By far, propagating seeds usually takes much longer than the other methods.

Cuttings can be taken after flowering in spring or autumn. Take 4 – 10-inch long cuttings off a mature plant that has bloomed for at least one season, after the leaves appear cut just under a node and remove any leaves at the lower ends.

Use a container of a moist mix of peat, perlite, and sand and plant the cuttings, burying the stems with one or two nodes into the soil mist daily for a month until roots form. Once roots get established, transfer the cuttings to larger pots outdoors for at least a year before transplanting them into your garden.

Layering is an easy method of propagation, choosing a long branch on an existing plant, and bending it until it touches the ground. Gently scrape away bark all around a node and secure the branch with a garden fork or rock so it remains on the soil. Roots will form around the node after 3 – 4 weeks and you can now separate the rooted branch from the plant, dig it up, and transplant it to a new location.

Sometimes, drooping varieties of these plants with low-hanging branches often take root naturally when they are in contact with the soil and can be removed and transplanted.

This method is similar to layering and is used when the branch is upright or isn’t long enough to reach the ground. In spring, select a branch that has just a few flowers remaining and hasn’t produced leaves as yet. Select a spot near a leaf node and where the branch is straight. Gently scrape away bark below a node and cut straight under the node to create a flap that is attached to the branch above the node.

Remove all the leaves, leaving the branch bare about 6 inches before and after the cut you made gently lifting the flap, press some rooting powder onto the inner wood under the flap. Place a small bit of moss between the flap and inner wood and hold it down by wrapping moist moss around the site, about two inches thick above and below the site about 3 – 4 inches long.

Cut a 5 by 5-inch square section from a black trash bag and wrap it around the moss, making sure it completely covers the moss, and secure each end using duct tape.

Open the plastic in late summer to check if roots are visible in the moss. If rooting hasn’t been taken, re-secure the moss with the plastic and wait until spring for roots to appear. Cutaway the rooted stem below the rooted area and plant the stem in well-draining soil. Water it once a week if there is no rain until the new plant gets established.

These plants need feeding after they are at least a year old. You can start feeding them with a little granular fertilizer every month in spring and summer once they are established.

If left unchecked, these plants can get unruly and appear rather wild, with branches shooting out randomly. Some people prefer this look and seldom prune the plants however, if you prefer a tidier look, prune the plants to your satisfaction.

Pruning is best done just after the plants have finished flowering in spring. If you prune the plants after July, you might risk preventing the plants from flowering the next season. This will not kill the plants, but you won’t have a flowering season for a year.

Start pruning by cutting some of the older branches right down near the ground. This encourages new growth along with a compact form shape. You can also selectively prune away new branches to improve the overall appearance of your plants.

Due to their robust nature, these plants are largely resistant to pests and diseases. Waterlogging might be a problem if the soil doesn’t drain well.

Sometimes knobby galls can form on the stems or fungal twig blights might plague the plants. Both these problems can be treated by pruning away affected stems. Twig blights can also be prevented by pruning the plants to increase air circulation or by spraying a fungicide.

One of the common problems for no flowering is improper pruning as mentioned, these plants should be pruned just after they flower and before foliage appears, any later and you will risk pruning away next season’s flowers, leaving you with a bush full of leaves for the coming year.

Another reason for inadequate flowering is insufficient light. These plants need about 6 hours of daily sunlight. If this happens, trim back any trees nearby that might be blocking sunlight from reaching the plants.