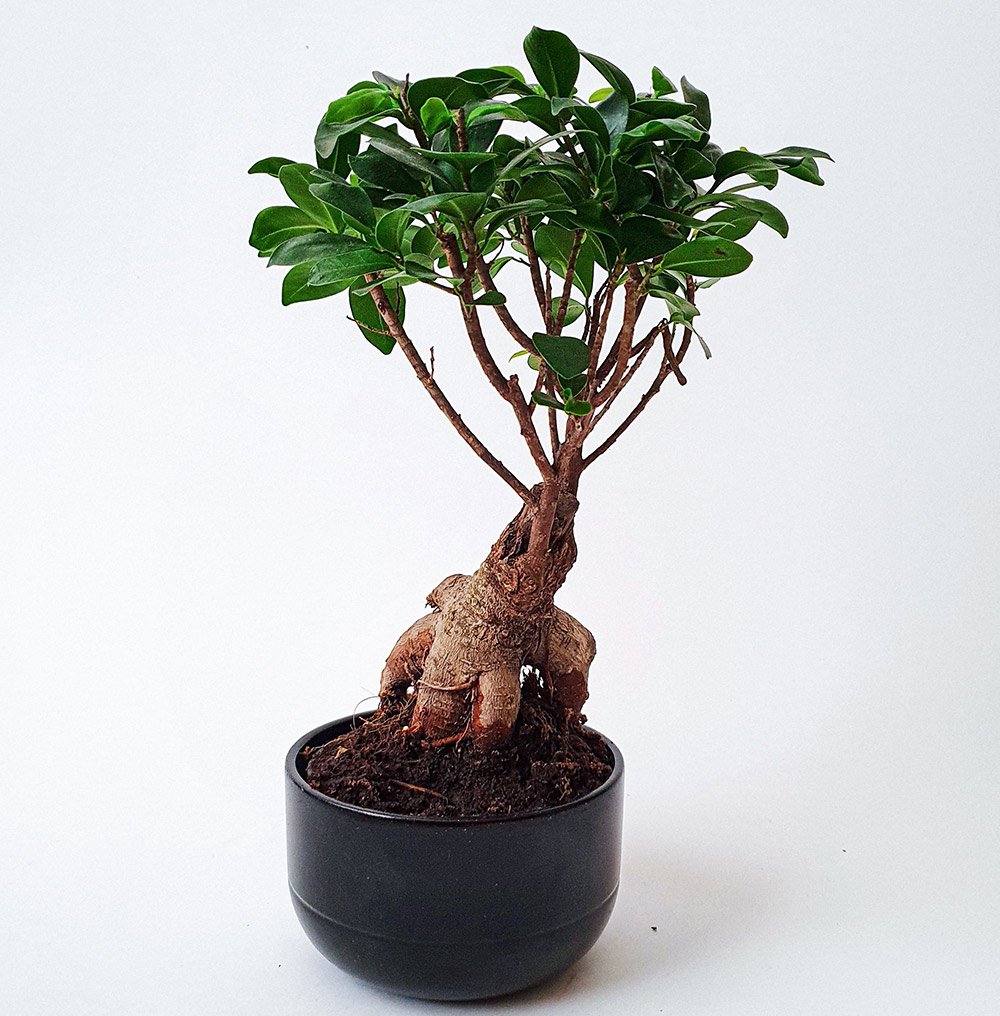 Ficus Retusa Bonsai, an evergreen tree popular with Bonsai enthusiasts, originates from the Malay Archipelago and can grow almost 33 feet tall in its native environment. It belongs to the family of mulberries and is a long-living tree that can live for over 100 years.

It is characterized by its smooth long green leaves and a light gray bark. It produces aerial string-like roots from the branches.

To give this Bonsai the best care, it needs specific soil for Bonsai plants to water only after the soil has dried enough indirect bright sunlight and environments of higher humidity and average temperatures. It can also be moved outdoors in warmer months.

Care for the plant is relatively easy, although it needs some extra tweaking when grown as a Bonsai. This little bonsai tree will often be grown up to 24 inches tall.

It likes to have plenty of light – specifically indirect bright light. While it can tolerate low levels of light, intense direct sunlight could cause damage.

This plant should be watered generously whenever the soil becomes slightly dry. It tolerates irregular over- or under-watering.

Due to its thick, waxy leaves, it is tolerant of low humidity but it prefers higher humidity and needs very high humidity for aerial roots to develop. You can mist the plant twice or thrice a week, particularly in winter.

You could also rest the pot on a tray of pebbles and water, without letting the pot sit in the water.

It thrives well indoors with temperatures within 60 – 75°F. The temperature must be kept relatively consistent. It can be moved outdoors in summer in temperatures above 60°F. However, it does not tolerate frosty conditions.

Using the proper soil is important to keep the plant healthy. The soil should drain well enough to prevent roots from rotting, while also retaining sufficient water. The following mixture is most suitable for bonsai plants – equal parts of Akadama, pumice, and/or lava rock.

Akadama, a clay-like granular mineral from Japan, is frequently used for bonsai trees. While it’s more expensive than other soil components, it is prized for its capability to retain nutrients and water while still providing free drainage and porosity.

Repot your bonsai every other year during spring, using a Bonsai soil mix. Repotting also depends on pot size and the growth rate of the Bonsai.

Older and more mature plants only need repotting in 3 – 5 years, check the Bonsai in early spring by gently lifting the tree from the pot. If you see visible roots around the edges then the Bonsai needs repotting. If roots are not visible and contained in the soil let it be and check it again in the following spring.

The best time for repotting is when the plant is still dormant in early spring, with new buds beginning to swell. At this stage, the detrimental effect of repotting will be kept to a minimum. Any damage to the roots will rapidly be repaired, as soon as the plant begins growing.

Like other Ficus varieties, this one can easily be propagated by cuttings. Take several cuttings from hardwood when summer begins and place them in a pot of fresh potting mix, keeping them moist, warm, and under indirect light.

Plastic bags can be placed over the pot to trap moisture and create a mini-greenhouse to boost rooting.

Consistent pruning is required to maintain the tree’s shape. You can prune branches down to 2 leaves after 6 to 8 leaves have grown. Leaf pruning can reduce leaf size since some Ficus Bonsai plants typically produce large leaves. If you want the trunk to get thick, let the plant grow without pruning for 1 or 2 years.

The strong pruning that will be necessary afterward won’t affect the plant’s health and new growth can emerge from old wood. Large wounds must be covered with Bonsai cut paste.

Branches, roots, or trunks can be fused by applying pressure. This is called approach grafting and you can use it to create interesting structures. You can also tie several young plants together and fuse them to create a strong single trunk.

Due to their flexibility, you can use wire and bend thin or medium branches but always check the wires frequently as they could cut into bark very fast.

Most Fig species are resistant to pests, but they can still be vulnerable to problems depending on growing conditions.

Dry air and low light can weaken the plant and often results in leaf drop. Overwatering and exposure to cold drafts can also cause leaf drops. Always water properly and mist the plant regularly.

How big does a ficus retusa get?

As a bonsai, it will reach a height between 16 to 32 inches but it can grow around 33 feet tall and 3.3 feet in diameter in its natural environment

How long does ficus retusa live?

These long-living trees can live for over 100 years.

What is the main difference between ficus Microcarpa and ficus retusa?

In western countries, Ficus microcarpa is often mistaken for Ficus Retusa and can only be distinguished by the length of its leaves. Ficus Retusa leaves are about 3.9 – 7.9 inches long while the leaves of Ficus macrocarpa are around 2 – 2.5 inches long.