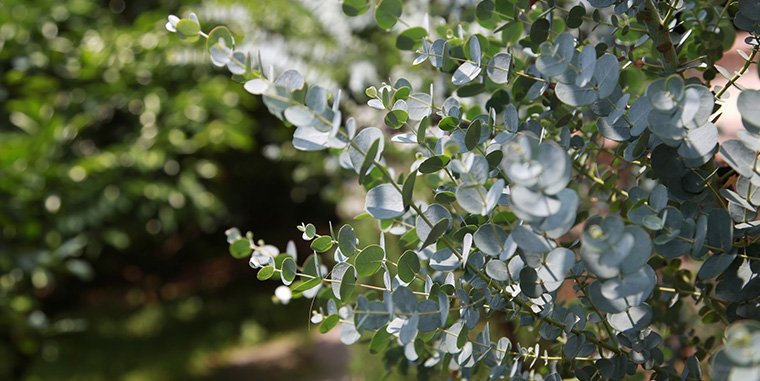 Eucalyptus is a genus with more than 700 plant species in the myrtle Myrtaceae family. The bark of these plants are either fibrous, hard, stringy, or smooth, with leaves containing oil glands and petals and sepals that fuse into a “cap” over the stamens. The woody fruit is a round capsule called a “gumnut”.

Most of the 700 species of this genus are indigenous to Australia, although a few species are found in Indonesia and New Guinea with one species, E. deglupta, in the Philippines. These species are widely cultivated in temperate and tropical areas, including Australia, both Americas, Europe, Africa, and Asia.

Some countries have limited cultivating them due to their flammable nature. Almost three-quarters of the forests in Australia are eucalyptus forests. Wildfire is an almost yearly occurrence in Australia and most species have adapted to fire and regrow after a fire or produce seeds that can survive a fire.

Their intolerance to cold also limits where they can be cultivated, although there are a few cultivars from E. pauciflora, which can withstand the cold and frosty temperature of −4 °F.

Several other species such as E. coccifera, E. subcrenulata, and E. gunnii, found on the high plateaus and mountains of Tasmania are also cold-hardy and seed harvested from these hardy strains are planted as ornamentals in colder regions of the world.

Trees generally grow a single stem or trunk. The giant gum or mountain ash (E. regnans) found in Victoria and Tasmania, has a reputation of being the tallest known flowering plant in the world and grows to a height of around 300 feet with a circumference of 24.5 feet.

The tallest specimen alive today named Centurion is 330 feet tall but many are low-growing mallee shrubs that are multi-branched from the ground and rarely taller than 33 feet the difference between a shrub and a mallee is hard to define but with eucalyptus, a shrub is considered to be less than 3 feet tall. They are classified according to height:

E. cinerea leaves are the favorite food of koalas and grow to 60 feet or more in their native environment, but grow smaller in gardens, usually around 6 or 10 feet high. Its reddish-brown bark peels away on smaller branches.

The leaves are silver to blue-green and exude a distinctive menthol-like aroma when bruised. The flowers produce large quantities of nectar, attracting many pollinators including several insects, bats, birds, and animals. The trunks and branches allow the largest moth, Zelotypia stacyi with a wingspan up to 9+ inches, to feed their larva.

They are best planted in spring; nearly all varieties are evergreen, but a few tropical species drop their leaves after summer. These trees are fast growers and are used for lumber, pulpwood, dyes, charcoal, honey production, and essential oils.

Essential oils extracted from the leaves contain powerful natural disinfectant compounds and are toxic in large quantities. Several marsupials, particularly koalas and a few possums can tolerate eating it. The trees release compounds that prevent other plants from growing close by.

Due to their rapid growth, the lumber industry benefits the most from these trees – they can be chopped down to the ground and quickly grow back again. The wood is used for ornaments, furniture, timber, pulpwood, firewood, fence posts, and railway sleepers as the wood is very resistant to decay.

While they are valued for their economic impact, they are often criticized for being water-guzzlers as they can draw huge amounts of water from the ground. In some places, plants have been planted to reduce soil salt content and reduce the water table to control malaria by draining swamps.

This plant likes plenty of light, so select a location in the garden that receives a six-hour minimum exposure of direct daily sunlight. Similarly, plants growing indoors should be placed near bright windows.

This plant is slightly drought-tolerant once it gets established however, it doesn’t like being dry for long and will drop its leaves or branches. This often comes down to watering every week if you don’t get rain, particularly for container plants since they dry out faster.

It prefers warmer temperatures between 65-75°F and won’t survive long exposure to temperatures under 50°F. Just a handful of species are cold-hardy so check with your local nursery if they have them available if you live in an area with cold winters but if you’re growing the less hardy plants in containers, bring them indoors when the temperature drops.

This plant can tolerate almost all kinds of soil, but it needs good drainage for container plants. A well-draining mix will be perfect with a slightly acidic or neutral pH level.

This plant is often kept in containers out of their native hardiness zones, this lets gardeners protect the plants from cold temperatures by taking them indoors.

However, many grow container plants as annuals, starting new plants every year due to their rapid rate of growth. This keeps them manageable as indoor plants that can also be kept on balconies and decks in warmer weather.

This plant doesn’t like its roots to be distressed so start it in a large container to avoid repotting – 5-gallon containers are good enough just ensure the container has good drainage capacity and use a fast-draining soil mix.

This plant is mostly grown from seeds or purchased as nursery plants. Plants growing in gardens or containers don’t flower often to produce seeds. While it can also be propagated by cuttings, this method is hit or miss and isn’t always successful but it’s worth making the effort since these plants are hard to come by in nurseries or garden centers.

Take cuttings in summer when the plant is about 2-12 months old – trying to root mature cuttings is difficult. Select a suitable pot and prepare it with a mix of 3 parts compost and 1 of perlite, adding slow-release fertilizer, following the instructions, and keeping the growing medium moist.

Cut off a 5-inch long stem over a leaf node that has 4 to 8 leaves. Lower leaves should be removed and the end dusted with rooting powder. Insert it into the growing medium to where the remaining leaves are.

Keep the cutting under indirect bright light under temperatures of at least 70°F and keep the soil lightly moistened. Rooting should take about a month or so, now you can move it to a sunnier area and gradually reduce watering to once weekly. Once the weather becomes warmer, plant it outdoors or transfer it to a container.

Chill the seeds first for two months in your refrigerator before planting. Sow them indoors in late winter about 10 or 12 weeks before winter is predicted to end. Use seed-starting mix in peat pots that can be planted directly in the soil without touching the roots. Press the seeds onto the medium and slightly cover with the mix.

Place the peat pots in a warm location under indirect bright light, and keep the medium moistened but not water-logged by misting. They will germinate in 2 or 3 weeks. Once they are 6 inches tall, they’re ready to plant outdoors or in containers.

If your plant is growing in the garden, it normally won’t need feeding. However, plants in containers deplete nutrients faster so feed them with low-nitrogen fertilizer during their growing season, following the instructions.

They generally don’t need pruning but overgrown, misshapen, or broken branches can be pruned to maintain a healthy appearance in summer, avoiding pruning in humid weather.

These plants are relatively free of pest or disease problems, although Phoracantha semipunctata or eucalyptus longhorn borer and bell miners or psyllids feed on the sap and have become established wherever these plants are cultivated. Psyllids can be sprayed off or treated with neem oil.

You might be able to spot eucalyptus long-horned borers occasionally on stressed plants by the holes they create in the bark, or by oozing sap and discolored foliage. Remove the affected portions, since insecticides are unsuccessful against bore