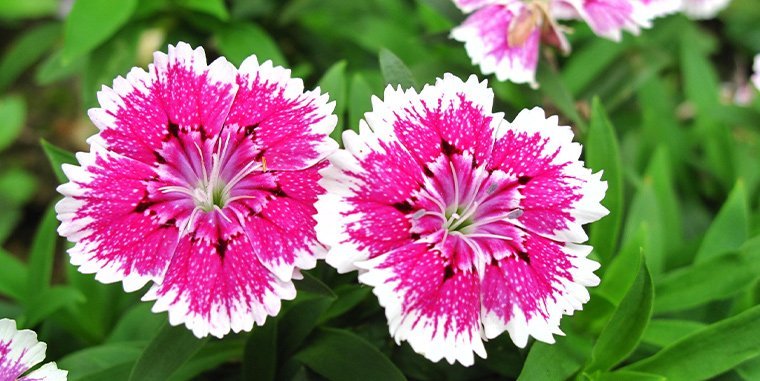 Dianthus is a genus consisting of around 340 species of plants from the Caryophyllaceae family and is native to Europe, Africa, and Asia with one species found in arctic North America. Commonly called carnation, this genus is among the first flowering plants known to be cultivated and was revered for centuries dating back to the Ancient Greek and the Roman eras.

They were often depicted in decorative friezes on important buildings and were often added to flower garlands used in celebrations.

The name comes from Ancient Greek “Dios” god and “anthos” flower – in short, “flower of gods.” How they got to be named as such is a bit of a mystery, but two mythological stories relate.

One tale relates that Diana, the Greek goddess, blamed a shepherd playing the flute for scaring a prey she was hunting and plucked his eyes out in a fit of anger and red carnations grew from the spot where the blood pouring from his eyes fell – a symbol of innocent blood.

Another tale comes from Christian mythology, claiming that carnations first grew from the tears Mary shed along the path that Jesus took carrying the cross to Golgotha – yet another symbol of innocent blood.

While most species are herbaceous perennials, there are some annual or biennial species along with some low subshrubs bearing woody stems, making it confusing when shopping for these plants to buy for your garden.

The perennial dianthus species have narrow leaves that are opposite, simple, linear —almost grass-like—and often colored blue-green to grey-green and grow either as a mound, erect, or trail on the ground.

When choosing a dianthus variety for your garden, don’t be misled by the “pinks” name as this refers to the jagged borders of the flowers. Most varieties are best started in spring and start sprouting in eight days more or less, ranging between 6–59 inches tall and 6–24 inches wide and can start blooming in less than 3 months.

Flowers have 5 petals and are more profuse in late spring, with some flowering throughout the year. Flowers can be either single or double, with all possessing the same jagged-edged flowers and come in various color combinations of white, yellow, lilac, red, and pink. Some species, notably perennial pinks, are well renowned for their fragrance.

These plants have been a garden favorite for a long time and are very popular for their longevity in cut flower arrangements and their beautiful fragrance.

Most species are utilized as food plants by larvae of cabbage moths, Double-striped pugs, large yellow underwings, and the lychnis, including three species of Coleophora case-bearers (C. dianthi, C. musculella, and C. dianthivora) that feed mainly on D. superbus.

Many species have been bred and hybridized to produce several thousands of cultivars, in various shades of white, yellow, pink, and red and many different flower markings and shapes since 1717.

These plants need full sunlight, so select a location that will get six hours of bright sunlight every day. Insufficient light will result in fewer blooms or faded flower colors.

They need watering every week (about an inch of water every week). Do not waterlog the soil as this often leads to rot and wilt.

They don’t like humidity, so growing these plants and keeping them thriving in humid climates will be difficult.

They can tolerate light frost but not a deep freeze. If temperatures drop below 40°F, protect the plants with a frost blanket. They can also stop flowering in hot temperatures above 85°F.

Stem rot is often a problem if the soil isn’t draining well or your garden has heavy clay – better to grow them in containers or raised beds instead. In addition, they prefer a neutral to somewhat alkaline soil pH. Mulch can be used to control weeds but don’t let the mulch touch the crowns off to the plants to avoid rot.

Water the plant one day before to prevent transplant shock. Prepare a new container with well-draining soil, adding some compost to the soil or a slow-releasing fertilizer. Carefully remove the plant from the old pot and divide it if necessary. Place it into the new pot, carefully filling the pot with additional soil, and water it well.

These plants can easily be started from seed, stem cuttings, or division, the latter two ascertaining that new plants will possess the characteristics of the “mother plant.”

As mentioned, seedlings will not always have similar characteristics to the parent plant, particularly if you harvest the seeds yourself. It’s better to get seeds from a reputed vendor. Prepare a growing mix consisting of 3 parts soil, 1 part moss, 2 parts compost, and 1 part sand and combine well.

Fill pots or trays with the mix and gently sprinkle seeds on the surface be careful, since the seeds are brittle along their edges and lightly cover growing medium, mist lightly with water, place the pots/trays in a sunny spot and keep the soil moistened until the seeds start germinating in 8 or 10 days. Transplant the seedlings when they grow about 3-4 inches tall.

In summer, cut away a 2 to 3-inch stem with several leaf nodes from a mature plant. Cut around 1/4 inch under a leaf node. Combine potting soil with vermiculite in a pot —this mixture should stay moist but not soggy or damp.

Insert the cutting until one node is below the soil, place in a bright spot with the soil kept damp and the cutting will take root in a month. Once new leaf growth emerges, the cutting can be repotted or transferred to a garden bed and cared for as normal.

When this plant gets older, it usually forms a large, spreading mound that slowly creeps outwards. You can divide the plant when it reaches this stage, usually every few years, to get more plants.

Before you start, water the plant a day before to reduce transplant shock. Carefully remove the plant and separate 3 to 6-inch segments using your fingers. Replant these in a prepared garden bed or pot and water well.

Proper pruning can help increase blooming and keep the plant healthy throughout the year. Deadhead flowers when they are spent, particularly on varieties that bloom repeatedly and remove any diseased or damaged stems or leaves.

In autumn, cut down the plant to about 1 – 2 inches from the soil as the plant goes dormant in winter. Add a dense mulch layer to provide some protection, removing it when new growth begins in spring.

These plants are easy to grow and rarely have problems flowering. However, if you’re facing trouble getting the plants to flower, there are some things to be kept in mind. First, these plants should get a minimum of 6 hours of sunlight every day. Insufficient light impacts the frequency and effervescence of the flowers.

Secondly, water is important for the health and flowering of these plants. Make sure that the soil doesn’t dry out with weekly watering—mulching the soil will help lock in moisture and prevent it from becoming dry. However, over-watering must be avoided to prevent rot and wilt.

Lastly, proper pruning is necessary to encourage the plants to flower. Frequent deadheading spent blooms makes the plant produce more buds and leaves, instead of expending energy into producing seed.

One of the major problems affecting these plants is vascular wilt causing stems to become dull green, droop and dry out. Wilt can ultimately kill the entire plant. Treatment is problematic since fungicides aren’t as effective. Rotate plants frequently and avoid soil that appears to be diseased.

In addition, common plant pests, like aphids, mites among others also affect these plants. Insecticidal soap and/or neem oil application should be continued until all indications of an infestation disappear. Aphids feeding on stems can also be controlled by a powerful spray of water.

Carnation flies occasionally lay eggs on these plants, with their larvae burrowing and creating “tunnels” in the leaves. Spray garlic tea on the plant or plant garlic around the plants to help prevent and eliminate flies along with their larvae.

Rust can be avoided by providing the plants with good ventilation. Remove any leaves with brown, rusty marks or treat the infection with copper oxychloride. Infected plant material should be destroyed.

Powdery mildew affects the plants in warm and humid conditions. Provide the plants with good ventilation and remove infected plants.