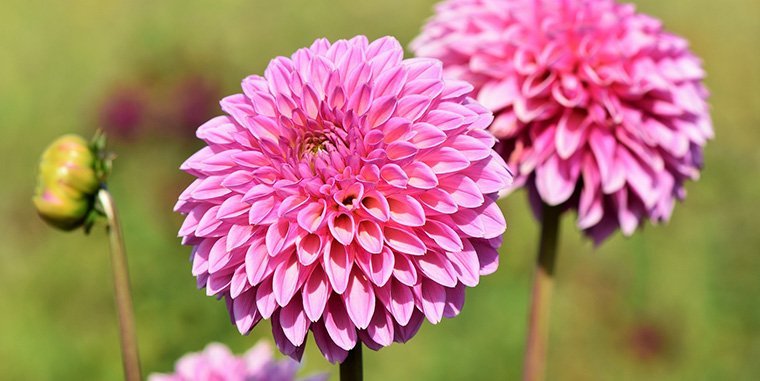 Dahlia is a perennial genus of bushy, herbaceous, tuberous plants indigenous to Central America and Mexico and belongs to the Asteraceae (Compositae) family. It is related to the sunflower, zinnia daisy, and chrysanthemum.

The genus is found growing in elevated uplands and mountains, at altitudes between 5,000 and 12,000 feet. It was named after Anders Dahl, a Swedish botanist. There are around 14 groups of these plants, with several varieties and hybrids that have been developed and cultivated by several gardeners, botanists, and taxonomists.

The plant was called “Acocotle” by the Aztecs who cultivated and harvested the plants. Spanish Conquistadors found the plants growing in Mexico in 1525, but the earliest description of the plant was from Francisco Hernández, a naturalist and physician of the court of Philip II, who visited Mexico in 1570 to document the flora and fauna of the “New World”.

He described two varieties of dahlias and Francisco Dominguez, who accompanied Hernandez, made several drawings to add to Hernández’s four-volume manuscript. The plant was first grown in Europe in 1789.

These plants have leafy stems, ranging from 12 inches to more than 6–8 feet. The bulk of these plants don’t produce scented flowers. Like other plants who produce unscented flowers through scent, they attract pollinating insects using their brightly colored flowers of many different hues other than blue. The common pollinators of the flowers are small beetles and bees

Many attempts were made to introduce the tubers in Europe as food but were unsuccessful. In 1963, Mexico designated the dahlia as their national flower.

These perennial plants have tuberous roots, although they are cultivated as annuals in areas with cold winters. While some plants have herbaceous stems, others have stems that become woody, sprouting and growing back again after winter. The modern genus name Asteraceae describes the flower’s appearance as a star surrounded by rays.

These plants need full sunlight, at least 6-8 hours every day, to produce plenty of flowers. However, in warm climates, they will require some shade during the particularly hot hours of the afternoon.

Don’t water the tubers when you first plant them, simply provide enough water to maintain soil moisture. After the tubers root and start sprouting new growth, they should be watered 1-2 times weekly depending on environmental conditions (hot weather).

Water deeply since the large tubers are deep and water has to reach the roots. If it is particularly dry and hot, they might need more frequent watering. The soil should never become dry and this is detrimental to the health of the plant.

These plants need relatively average humid conditions when actively growing. When the tubers are harvested for storage to plant the next year, they will need humidity levels between 70-85% otherwise the tubers might dehydrate and shrivel. Any higher and the tubers might start rotting or develop mold.

These plants require a daily temperature of 68-72°F and a low of 60-64°F. Higher temperatures can accelerate blooming but will affect the plant if exposed for prolonged periods. Temperatures above 80°F should be avoided.

These plants thrive in loamy, rich, and well-drained soil amended with organic compost and a neutral soil pH of around 6.5. Ensure the soil can retain moisture but also drains well by adding vermiculite or perlite.

Prepare an 8-inch wide pot half-filled with appropriate soil, ensuring the pot has many drainage holes. Remove the plant and trim any damaged roots, if applicable. Plant it in the pot, adding more soil. Water the repotted plant until water drains out. Place it under indirect bright light and resume watering as normal. Once new growth appears, move it to its old location under full sunlight.

Dividing the tubers, sprout cuttings and seeding are the common methods of propagation.

Divide the tuber, making sure each section has an eye. After cutting, allow the sections to dry before planting these outdoors or in pots as mentioned above.

Plant the tubers in moist soil so that the tip is above the soil. The tubers will start sprouting after growing 2-3 weeks in a bright, warm spot. When the sprouts are around 3 inches tall, cut them off just above the tuber and plant them in small pots filled with soil with the lower leaves close to the surface of the soil. You can get about six sprout cuttings from one tuber. After about eight weeks, when the plants are large enough, they can be transplanted outdoors or in larger pots.

Sow the seeds directly in your garden and lightly cover them with soil. Their spacing depends on the variety and their expected height. Space shorter varieties about 12 inches away from each other and taller varieties around 3 feet apart. You can also start them indoors and sow the seeds individually in pots 4-6 weeks before winter ends.

These plants need heavy feeding—the more they are fed the bigger the plant will be, with bigger and more flowers. Use a high phosphorus fertilizer to promote flowering. Never use a fertilizer with more nitrogen as nitrogen produces plenty of foliage but fewer flowers.

If you want to store tubers during winter, stop feeding the plants in August after the flowers have bloomed. This discourages more growth and prepares the tubers to go dormant. Dig the tubers up in the first week of November or after the first signs of winter and remove the foliage and excess soil. Line a plastic bin with cardboard and wood chips, place the tubers in, and cover with shredded newspaper to keep them dry. Seal the bin, storing it in a dark area under temperatures of 40°F.

The flowers should be harvested along with their stems. More stems and flowers will grow back as harvesting encourages more foliage and flowers. If you don’t want to cut flowers for floral arrangements, remove faded/dead blooms to promote more flowering.

A common pest that affects younger plants is slugs, although they don’t usually attack mature plants. Spread diatomaceous earth near the plants as a deterrent. Earwigs, caterpillars, and thrips can also pose a problem.

These plants can also be susceptible to fungal diseases and powdery mildew. Avoid wetting the foliage and space out your plants for better air circulation. Use neem oil or insecticidal soap to deter these pests and diseases.