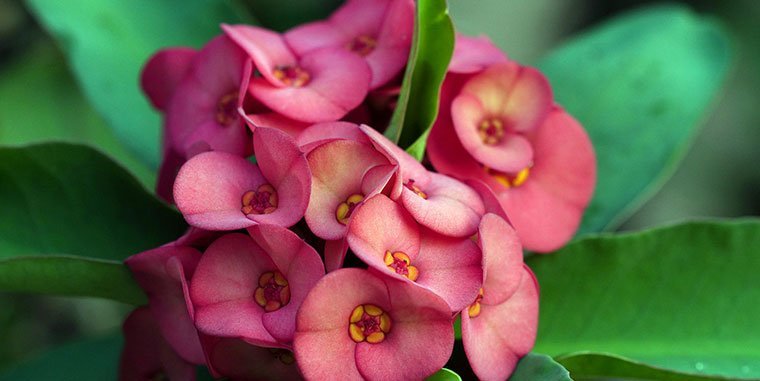 Euphorbia milii or crown of thorns is a flowering plant that is indigenous to Madagascar and belongs in the Euphorbiaceae family. It is named in honor of Baron Milius, a Governor of Réunion, who introduced the plant to France in 1821.

It is thought that the plant was introduced to the Middle East in ancient times and legend has it that this plant was the actual crown of thorns worn by Christ during his crucifixion, with the deep red bracts symbolizing His blood. It is popularly grown as an ornamental in warmer climates.

Despite its rather disconcerting name, this is a beautiful succulent that blooms almost year-round, even when growing indoors. The thick, green leaves grow on the spiny stems and the actual flowers are green and small, encircled by showy bracts of red, yellow, orange, pink, or white.

This slow-growing plant can stretch out to 3-6 feet high outdoors although it will only grow about 2 feet tall as a houseplant. Its slow growth is largely due to the amount of energy it expends on producing the large flowers almost constantly. It is an ideal plant to grow indoors as it prefers average room temperatures in most homes and the lack of humidity during the winter. The growth of the plant is usually active during spring and summer.

The plant is a potent molluscicide and WHO has recommended using it to control snails as Schistosomiasis, an infectious disease spread by freshwater parasites, is carried by snails.

Many flowering plants produce more flowers based on their exposure to the sun, but this plant doesn’t follow that rule as it reliably produces flowers throughout the year with just 3-4 hours of exposure to bright sunlight every day. Place the plant under the full sun outdoors and keep it indoors facing west or south during winter. While they enjoy direct sunlight, too much exposure will cause the colors of the bracts/flowers to fade.

This plant can usually be watered once weekly, although it might need more watering if growing in warmer locations in summer. Water it thoroughly and let extra water drain away. Don’t let it sit in water or damp soil for extended periods or root rot will develop. It goes semi-dormant in winter and needs less watering.

As a succulent, the humidity requirements are somewhat low as it prefers less humidity, like that of an average home, making it ideal for those gardeners who prefer growing the plants indoors. And, to make life even easier, it doesn’t require any additional misting.

Although it prefers warm temperatures, average temperatures of 65 – 75°F are good enough for the plant, with lows down to 50°F. Temperatures lower than 35°F can result in some damage to the leaves.

It prefers well-draining, sandy soil mixed with organic compost. When growing it in containers, use a container a size larger than the roots to avoid water-logging.

Since this is a slow-growing plant, repotting (if necessary) can be delayed for years. It isn’t known for becoming root bound, so you won’t have to be concerned about it becoming restricted in its container.

This plant is normally propagated by cuttings in either soil or water and by seed germination, although most plants are hybrids and usually are not propagated from seed. To limit contact with the sap, wear gloves and immerse each cutting taken in warm water for a few minutes. After that, let the cuttings dry and callus before planting in a pot of fresh and slightly sandy soil, inserted about two inches deep. Water the cutting well and place it under warm, indirect sunlight. Rooting should start around 2 weeks after planting and the new plant can now be transferred to a new container.

Feed it with a diluted balanced fertilizer during every other watering except in winter.

This plant is sometimes grown unruly after its 2nd or 3rd year and might need to be trimmed back to keep its growth controlled. Cut back branches close to the stems to avoid stubby and uneven growth. Wear gloves while pruning to avoid contact with the sap.

Most pests avoid this plant, although common pests, like scale, thrips and mealybugs might be an occasional problem. Insecticidal soap sprays will help deal with these pests.

A close watch must be kept for fungal diseases like botrytis, leaf spot, and root rot. Avoid over-watering and letting the soil dry before the next watering will help prevent these problems. Keep an eye on the soil to make sure it drains well enough.

Leaves might sometimes start turning yellow and falling from the branches. The two most likely causes for this can either be over-watering or exposure to cold drafts. Follow a regular watering schedule and protect the plant from drafts, particularly if winter in your location is very cold.

Sometimes lower leaves might start shriveling and drying up. This can usually happen if the plant isn’t getting enough light or due to under-watering, another potential cause might be due to very hot weather. Remember that the plant needs some exposure to light so relocate it if it can’t get enough light or it is getting too much direct sunlight. It also needs more water if the weather turns very hot, particularly if it grows in a container. While this won’t save the leaves that have started shriveling, you can stop this from happening in the future. After addressing possible issues with heat, relocate the plant to a spot that gets less direct light if that is the problem identified.