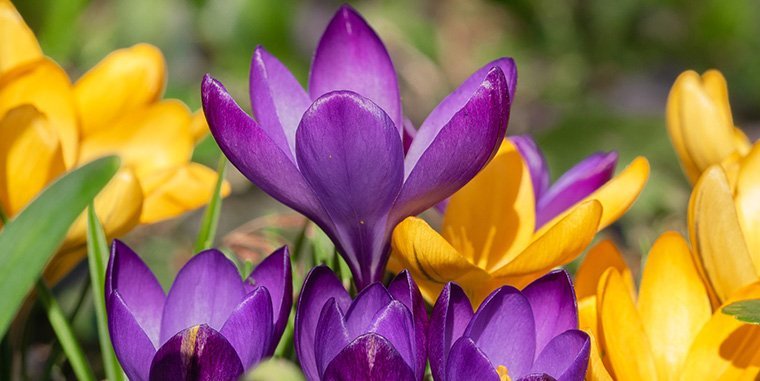 The Crocus genus belongs in the Iridaceae or iris family that encompasses 90 species. These perennial plants grow from corms and are cultivated mostly for their flowers that appear in all the seasons except winter. This genus is found in woodland, meadows, and scrubland from sea level to alpine regions of Asia, Africa, and Europe.

The famous spice, saffron, is collected from the flower stigmas of C. sativus, a species that blooms in autumn. Cultivation of C. sativus was depicted on murals from the Minoan civilization found at Bronze-age archeological sites on the Greek islands of Crete (Knossos) and Santorini (Akrotiri).

The plant was first introduced to the Netherlands in Western Europe around 1560. They became popularly grown in ornamental gardens and by the early 17th century, new hybrid varieties were developed and are still being cultivated today.

The heights of these plants vary depending on the variety but typically grow about 6-12 inches with a width of 1-3 inches. Their leaves are grass-like and the flowers usually appear in spring as soon as the ground thaws, although there are a few that emerge in autumn, like C. sativus or saffron crocus.

They frequently emerge in patches of snow and create an eruption of color in early spring, much before other plants start to bloom. Bees are attracted to gather nectar and pollen to get an early start on the season. They have a broad array of colors from white with yellow centers to gold, blue, pink, purple, and orange along with many striped varieties.

The flowers have three stamens, while another toxic plant called the autumn crocus (Colchicum) looks similar but has six stamens, this one and other similar autumn-blooming crocuses like Colchicum autumnale, are Colchicum species belonging to the lily family.

2 kinds of crocuses flower in spring – the species varieties, (snow/wild crocus) that usually are the first to flower with smaller blooms and the more prevalent Dutch crocus (hybrids developed from C. vernus) that produce larger blooms and flower a little later.

These plants can grow under full sun and partial shade as well.

These plants typically flower in spring, when their soil is still damp from snow and ice, and don’t require supplemental watering at the time.

After flowering, they will benefit from sporadic watering if your location does not get sufficient rainfall but keep in mind that their corms go dormant and don’t require plenty of water. They prefer somewhat dry soil and will undergo damage if the soil gets soggy.

Humidity typically isn’t a problem, although too much humidity often leads to rotting.

While these plants are not picky, they must have well-draining soil to prevent the corms from rotting. Gritty or sandy soils amended with rich loamy soil will do.

Repotting these plants when growing in containers generally depends on how over-crowded they get as overcrowding typically affects their growth and flowering, any container you choose should have adequate drainage.

Place the corms with their tips sticking out slightly from the soil in the containers, cover the corms with soil and gently press the soil downwards to remove air pockets. Sprinkle a balanced granular fertilizer over the surface water gently but deeply.

These plants are propagated by two different yet similar methods that require digging up the root clump. When the first frost hits in autumn, dig up the dormant root clump and inspect the corms for insect damage or rot.

Separate the corms or offsets that have formed around the mother corm and replant them into containers or your garden, leaving ample space between them. This should be done every 5 years or so to prevent overcrowding.

Apply balanced granular fertilizer in early fall if spring is short and the weather heats up fast in your location or apply the fertilizer if the plant’s flower in late winter and spring is long and cooler.

Depending on the state of the soil the plants grow in, you may have to feed the plants once or twice a year. As mentioned, if you’re using granular fertilizer dispersed around the plants, pour water over the granules to help them slowly dissolve and settle into the soil while liquid or water-soluble fertilizers don’t require extra watering after application.

These plants don’t require pruning – just let the leaves die back after flowering and then cut the dried parts away. It’s important to allow them to die back by themselves, as they help the corms to store food and energy for healthy growth next season.

The corms are seemingly very tasty for squirrels, voles, and mice. Keep these avaricious rodents away by protecting your planting beds by burying a strong wire barrier over the corms, like chicken wire or something similar, to prevent them from digging and eating the corms. Consider inter-planting with daffodils as these animals hate them.

These beautiful plants can also be plagued by root-knot and bulb nematodes. You’ll have to remove and destroy affected plants. To prevent nematode infestation, add compost rich with micronutrients regularly to the soil, beneficial organisms living in the compost can help control nematodes.

Sometimes, the leaves might become yellow and die suddenly. This disease is mostly spread by bulb mites and frequently breaks out in warm and wet weather. Destroy infected plants and dip the corms into a bin late solution before you plant or store them. Carefully dry the corms you’re setting aside to store.

These plants are also vulnerable to viruses that can cause stunting, streaking, and flower buds that won’t open. There is no treatment for viral diseases – if the plants are infected, immediately discard the plants to stop the virus from spreading.