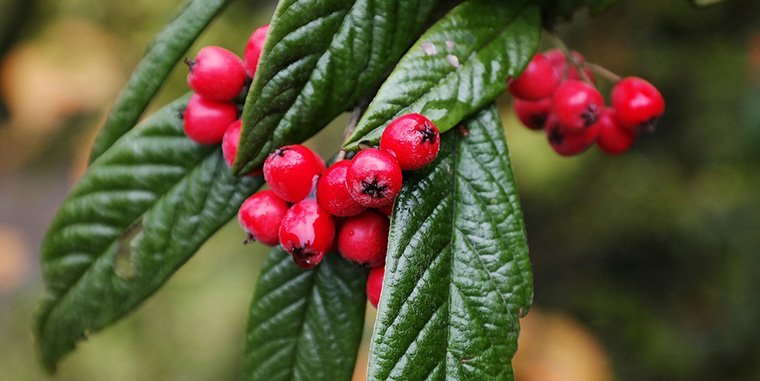 Cotoneaster is a genus of flowering plants from the Rosaceae family and is indigenous to Eurasia and North Africa, with a strong assortment of varieties in the Himalayas and mountains in southwestern China. They are associated with Crataegus (hawthorns), Pyracantha (firethorns), photinias, and Sorbus (rowans). There are roughly 260 different species of Cotoneaster and several hybrid varieties.

The sizes of the different species vary but most share many similarities. They all have a vigorous spread that is typically three times more than their heights. These plants are rather hardy and tolerate a variety of harsh settings including drought, salt spray, poor soil and fluctuations in pH levels, and strong winds in winter.

The majority of these species are shrubs ranging from 1.6–16.4 feet tall and vary from ground cover to erect shrubs. However, a few, particularly C. frigidus, are small trees growing to 49 feet tall with 30-inch diameter trunks.

The ground-hugging prostrate species are largely alpine plants that grow in the Himalayas at high altitudes of 9,800–13,100 feet, while larger species grow at lower altitudes. Most of the deciduous varieties are cold tolerant while evergreen varieties are better cultivated in warmer regions although both types have striking colors in fall.

The flowers bloom in spring to summer with white to creamy white to light and dark pink to almost red colors, either in corymbs of almost 100 or singly. Sometimes flowers can often bloom after spring flowers have finished and before summer flowering begins, making them very popular with butterflies, bees, and other pollinators.

Their fruits are small berries 0.20–0.47-inch in diameter, colored orange, pink, bright red, maroon, or even black when mature and contain one to three (sometimes five) seeds. The fruit of some varieties remains on the plants until the next year. Blackbirds and other thrushes love to eat the berries while some plant varieties are used as caterpillar food plants by some moth species

The prostrate varieties, with their low growing tendency, grow well as woody ground covers with their branches that dip and arch. These branches often take root and create dense colonies wherever they contact the soil. Upright varieties display similar arching and dipping growth tendencies but are often trained to grow as hedges and screens or topiary shapes.

Several species are garden escapees and have become invasive in areas of suitable climatic conditions, such as Europe, Australia, the United States, Canada, and New Zealand.

These plants can thrive under full sunlight and partial shade but produce more branches, flowers, and fruits under full sun, including more vivid colors in fall.

These plants need weekly or twice weekly watering in summer during their first growing year to establish extensive and deep roots and less water in winter. Watering can be reduced in their second year although potted plants will require consistent watering.

These plants grow well in low humidity and don’t grow well under hot and humid conditions. Excessive humidity might cause fungal leaf spotting, although this isn’t usually a life-threatening issue.

These plants prefer temperatures between 40-70°F and tolerate lows of -10°F.

They prefer a loamy, rich, and fertile soil with a good drainage capacity of a pH range from 5.0 – 8.0.

Young plants can be repotted yearly in spring while older plants need repotting every 2 or 3 years. Prune the roots and foliage to keep the plants to a manageable height. These plants thrive in containers, but you have to monitor the height and width of the variety and choose containers deep and wide enough to hold them.

These plants multiply easily and are propagated by cuttings or from seed. However, seeds take almost 18 months before germinating so cuttings are usually preferred as they produce good results and strong stock. Alternatively, you can purchase container plants from garden nurseries and centers.

You should take cuttings from semi-hardwood stems in evergreen plants and softwood cuttings from deciduous plants in summer. The cuttings have to be roughly 6 inches long and trim off the leaves along the lower two-thirds of the cutting to help the rooting process, lightly scrape and remove two inches of the outer bark at the cutting’s end.

Dip the end in rooting powder and insert the cuttings 2 or 3 inches into small pots filled with good draining capacity soil. Make sure the cuttings are firmly in place and lightly water the soil. Place the pots in a sheltered spot for the winter and ensure the soil stays damp but not soggy. Transplant in spring when roots are established.

They are light feeders and just need an annual dose of balanced fertilizer when spring begins, preferably a formula like 20-20-20 or a high nitrogen formula like 10-5-5.

Regular pruning helps the plants to remain compact and helps promote healthy foliage, more flowers, and berries. Prune the plants in spring before new leaves emerge, but it can also be done after flowering, although it will reduce the production of berries.

Remove dead or diseased branches, cutting stems down to the base. Cutting mid-stem or shortening them will make new growth grow straight up, if the plants have become too thick, removing older stems around the center will promote better air circulation.

They aren’t usually troubled by pests or diseases, but there are some you’ll have to look out for. Sometimes, pests like aphids or armored scale insects, attack in summer although rarely fatal, aphids suck sap from the foliage and leave unsightly trails of honeydew. They can be sprayed off the plants to control them.

Scale pests appear as small, round, or oval plates of different colors on foliage that could weaken or damage plants. Neem oil applied in winter will effectively control these pests.

A bacteria, Erwinia amylovora, can infect these plants with a disease known as fire blight which can occasionally be a problem, damaging branches or the entire plant in severe cases.

Cankers can appear in spring on branches and stems, oozing a light-colored material causing branches and flowers to blacken and shrivel later. Infected parts must be pruned and destroyed in extreme cases of severe infection, the whole plant might be destroyed. 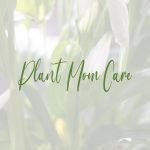