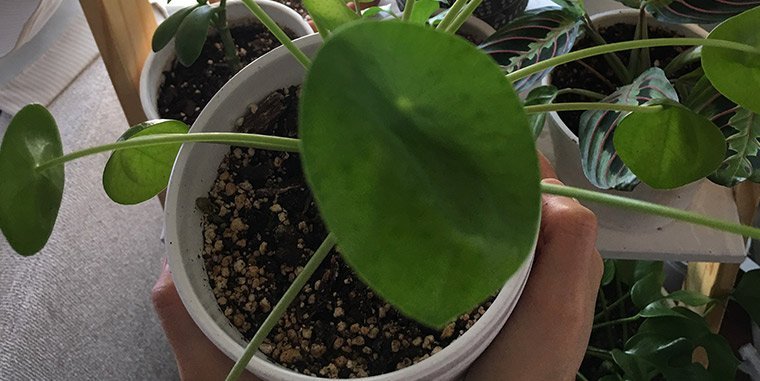 Pilea peperomioides, more commonly called Chinese Money Plant, Friendship Plant, Pancake Plant, the Missionary Plant, or UFO Plant is an evergreen plant of the family Urticaceae and is indigenous to South China. It is hard to be found growing wild these days, although it is grown in China and all around the world as an ornamental.

It is called “lucky” as it is known to bring prosperity and luck to owners that cultivate the plant. It is believed to bring more prosperity if it is well-cared for. Giving a cutting of the plant to friends is believed that you are also giving them wealth and luck. The cutting will thrive with very little effort and bring joy to whoever accepts your princely gift.

The first westerner to come across pilea peperomioides was George Forrest in 1906 and 1910, finding it growing in the shady forests of the Cangshan Mountain range of Yunnan Province. Agnar Espegren, a missionary from Norway, also came across the species in Yunnan Province in 1945, taking cuttings back to Norway in 1946 and spreading it all over Scandinavia.

Western botanists did not formally classify the plant until the 1980’s when the first image of it was published in the Kew magazine, the plant having been spread among gardening enthusiasts by cuttings since 1946.

The plant reaches a mature growth of 12 inches, with glossy, waxy green circular leaves that are nearly 4 inches in diameter and grow on long stalks. The leaves are attached to the stalk near the center. The color of the stalk is green to brown, normally without branches, and becomes woody at the bottom when mature.

It can produce unremarkable tiny white flowers with pink stems under the right conditions but this rarely happens when grown indoors. After some time, the plant will develop a stem and will take a Bonsai-like appearance.

The Chinese Money Plant is in high demand with gardening enthusiasts because it’s easy to cultivate and very tolerant of dry locations.

This plant loves plenty of bright light, but not direct sunlight as the leaves can get burnt and turn yellow or become bleached. Because of this love for light, it produces more leaves on the part that receives the lightest, existing stems also turning towards the light. Over time, it will become lop-sided if left to grow without rotating the pot, even toppling over because of all the weight on one side. Achieving balance and even growth is very simple by rotating the pot every 2 days.

However, if the light is not enough, you can invest in an inexpensive LED grow light with a timer so that the plant will always get the right amount of light.

The plant needs to be watered once every 4 days in warmer months, with longer intervals of watering in winter. It can handle some neglect in between watering, although over-watering can make the leaves drop. The soil should retain some moisture but make sure it doesn’t stand in water, as the roots will begin to rot. Clay pots are porous and help the water to drain away quickly as well as helping evaporate excess water.

While the plant isn’t that bothered by humidity, it just said that it is not native to deserts or the tropics so very low or high humidity is not suitable. An average humidity range of 40-50% suits the needs of the plant. Low humid conditions make the leaves become crisp and lose their waxy quality. Increase the humidity levels by misting the leaves spray to make its environment a little moist.

It loves warm temperatures in the range of 55°F – 86°F and does not like constant temperatures below 50°F, including rapid temperature fluctuations.

This thrives best in well-draining soil that doesn’t retain too much water. Avoid over-watering it and water-logging the roots as this will lead to wilting, eventually killing the plant. The soil must be well-aerated as well as being rich in nutrients.

Don’t compress the soil as this limits water to flow through the soil – it will help to dig up the soil to allow some fresh air to permeate the soil and roots.

The plant should be repotted every year into a slightly larger container as it likes to have space to grow. Mix a few pebbles with fresh soil and partly fill the pot. Insert the plant, filling the space around it with soil, and remember not to press down the soil too much. Soil that is compressed can’t breathe and become water-logged.

It is propagated from offshoots that grow off the parent plant or from underground rhizomes that will start shooting up around the base. This often creates an unruly display and it’s better to remove these offshoots and create new plants. Wait until the offshoots are a few inches tall before separating them from the plant.

Fill the new pots about halfway with fresh soil. Carefully remove the cut offshoot, shaking it to remove any soil particles and transfer it to the new pot and fill the spaces with soil. Place the plant in an area of sufficient light and water it as needed. Soon new leaves will start appearing.

It can also be propagated from offshoots growing on the plant’s stem. These can be removed and placed in water until small roots start to appear, planting them in soil when the roots are well-developed.

The plant needs to be fed during the warmer months, needing a little extra boost particularly when offshoots start popping out. Do not fertilize it in winter. Don’t over-fertilize it – it is suggested to use just half the regular dose once monthly. Alternatively, you can fertilize it by feeding it with organic worm tea.

The leaves can collect dust easily and should be kept clean by misting or washing the leaves in the kitchen sink, taking care not to drench the soil. Wipe the leaves with a cloth to remove excess water.

Like most indoor plants, the money plant can be besieged by spider mites, mealybugs, and fungus gnats. Spraying the leaves meticulously with water will remove pests without damaging the plant. Any remaining pests may have to be dealt with using cotton swabs and alcohol on affected areas.

Excessive exposure to sunlight or over-watering can make the plant turn yellow. The plant needs a location with sufficient light but not direct sun. Follow the recommended watering schedule or reduce watering if you notice that the soil is always wet.

Leaves curling inwards could be due to either over-exposure to direct sun or due to the plant being exposed to cold or hot air drafts. It will improve when you move the plant to a less drafty spot

One of the constant challenges growing this plant is that it is quite delicate and prone to damage very easily. Insufficient light might cause the plant to become gangly.