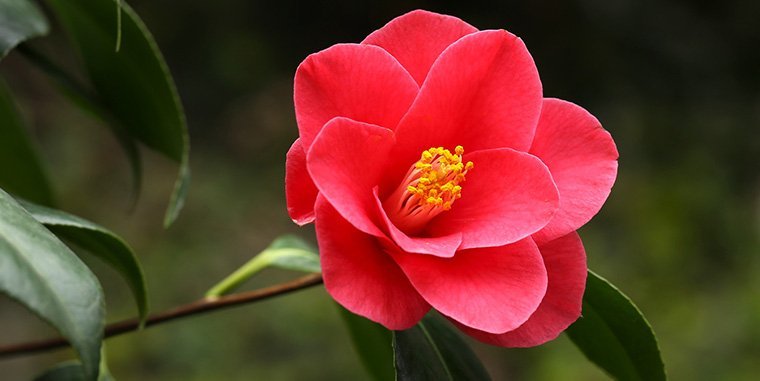 Camellia, a genus from the Theaceae family, are indigenous to east and south Asia, with about 100–300 species along with about 3,000 hybrids. Linnaeus named this genus for a Jesuit missionary, Georg Joseph Kamel, the first European to describe a species of camellia when he was working in the Philippines.

This evergreen species grows as shrubs to small trees from 2 to 66 feet high. These plants generally grow rapidly, typically about 12 inches a year until they mature, although this varies according to the variety and geographic location. Their mostly glossy leaves are thick and serrated and their flowers are mostly large and conspicuous, with diameters ranging from 0.3 to 4.7, with 5-9 petals among the indigent species.

Flowers’ colors vary from white, red, pink, and yellow – the varieties from which tea is made are always white, while varieties with yellow flowers are mainly found in Vietnam and South China. The flowers of the genus are distinguished by a thick bouquet of noticeable yellow stamens that often contrast with the colors of the petals. The “fruit” of these plants is a capsule, occasionally subdivided into 5 compartments, with each compartment having up to 8 seeds. These plants are eaten by caterpillars of several butterflies and moths.

Camellia sinensis is economically important in the Indian subcontinent, East Asia, and Southeast Asia because its leaves are harvested and processed to make green, black, white, and oolong tea. This species has been selectively bred for many generations to develop desirable qualities for tea. However, tea is also made from many other species. For example, the leaves of C. sasanqua are popularly used in making tea in some areas of Japan.

While ornamental flowering varieties and hybrids are cultivated for their flowers in gardens, several other varieties such as C. oleifera, C. japonica, as well as others such as C. sasanqua C. crapnelliana, C. sinensis, and C. reticulate are used to produce tea seed oil for use in cosmetics and cooking. While tea oil is relatively unknown outside East Asia, the oil is used by millions of people as cooking oil, especially in southern China. Due to the destruction of natural habitats, several varieties have become rare and threatened although they are widely cultivated for oil production and horticulture.

Oil from C. japonica seeds, called Tsubaki-abura or Tsubaki oil in Japan, has been used traditionally for hair care in Japan. These plants were cultivated for centuries in gardens in China and Japan before being introduced to Europe. Engelbert Kaempfer, a German botanist described the “Japan Rose”, as he called camellias, as being widespread in woodlands and hedgerows, with many superior specimens selected for cultivating in gardens. He was informed that these plants had 900 different names in Japanese.

The first camellias in England, a red variety and a white one, were grown by Lord Petre (Robert James) in his garden in 1739. James Gordon, Lord Petre’s gardener first began selling the plants to the public after Lord Petre died in 1743. After the expansion of the tea trade later in the 1700s, several new varieties were imported to England. In 1797, Colonel John Stevens introduced the species to America and cultivated the plant in Elysian Fields, New Jersey. By 1819, there were twenty-five varieties in England. By the 1840s, the plant was at the peak of its popularity as a luxury flower.

The species has been popularly depicted in art, literature, poetry, and culture by authors such as Alexandre Dumas, Harper Lee, and Rabindranath Tagore. White camellias were used as a symbol in New Zealand by the suffrage movement and appeared on their ten-dollar bill.

These plants thrive in partially shaded areas, although C. sasanqua varieties can handle more sun than C. japonica varieties. They can be grown under tall trees that don’t have aggressive root systems. Use shade cloth to protect young plants if the sun is too intense.

Water the plants so that the soil is consistently moist. If the plants are under-watered during bud formation will result in fewer blooms and open the plants to spider mite attacks. A 3-inch mulch layer will help moderate soil temperature, retain moisture and prevent weeds. However, some species originally growing in karst or limestone soils in Vietnam can thrive with less water.

These plants prefer a relative humidity level of 50% or higher. Mist their foliage regularly and use a humidifier in winter, if necessary. Don’t allow large water drops to fall on their flowers.

These plants thrive in temperatures between about 10-90°F, although some cold-hardy varieties can tolerate low temperatures of 5°F or even lower.

These plants prefer well-drained aerated soil, with pH levels within 6.0-6.5. If the soil in your garden is clayey and does not drain well, resort to containers instead. Select a container with a minimum size of 18-inches with loamy, rich soil. Their shallow roots demand high oxygen and under-planting around these plants isn’t recommended.

These plants don’t have to be repotted often but should be repotted before they get pot bound. Repot them in spring, in fresh soil.

These plants are propagated by layering and seeds, but seeds take along to become mature. So most cultivators commonly propagate them by layering.

Bend a stem to the soil in summer and make an angled notch in it. Bury the wounded part of the stem in the soil and place a large stone on it to hold it down. A good root system will form at the wound during its growing season. The stem can be clipped from the parent and the new offspring can be moved elsewhere.

These plants rarely grow true from seed. Their seeds usually ripen in early fall. When they are ripe, the seed pod will crack slightly – now they are ready for harvesting. Soak them for a day or damage the hard coat carefully to help them germinate. Sow them in a mix of sand and peat moss and keep the medium damp. They usually germinate within a month if they’re planted immediately after being harvested, although some might not germinate in winter. Once they have germinated, transplant them into the garden in containers.

Good fertilization is important for large flower production. A fertilizer rich in potassium applied in July will help facilitate good petal development while a slow-release fertilizer rich in nitrogen applied in spring will keep leaves healthy and dark green. You can also look for fertilizers designed specifically for camellias or even azaleas.

Pruning should be judicious, as it can affect the plant’s natural shape. Prune them when flowering has ended to keep the plants free from dead and non-flowering branches. Prune branches that are drooping to the ground.

Petal blight can make flowers brown. This fungal infection usually happens due to excess moisture in spring. Flower petals get tiny brown spots that rapidly affect the entire bloom. Infected flowers usually fall off in one or two days. Remove and dispose of affected flowers and treat the plants with fungicide every 1 or 2 weeks or so.

Leaf gall is often caused by fungal infection in excessively moist conditions. The leaves become fleshy and enlarged with small green-white galls underneath that eventually become rust-colored or brown. Prune affected leaves and treat the infection with fungicide.

Root rot, often due to over-watering and/or poor drainage, is a fungal disease that makes leaves turn leaf yellow, roots turn brown, causing poor plant growth and wilting, and eventually death. Prevention by proper drainage and watering is key for preventing this problem.

Camellia yellow mottle virus causes anomalous yellow mottling or patterns on leaves. Leaves might eventually become completely yellow. There isn’t any viable cure, so prevention is key. Since this virus is transmitted by infected plants, make sure to purchase healthy plants.

Other problems include physiological disorders and pests such as brown leaf, bud drop, scale, and mold. Brown leaf or scorch is caused by too much exposure to direct sunlight remove affected leaves as they usually don’t recover. Avoid growing these plants in direct sun and transplant them to a shaded location if necessary.

Bud drop happens when the plants get too much or less water, not enough light, or very cold temperatures, nutritional deficiencies, or mite infestation. Immature buds will drop off plants before blooming and might turn brown.

Scale bugs cause the most serious damage to these plants. These tiny pests attack underneath the leaves, causing plants to become yellow, produce fewer blooms, leaf drop, and even die. Handpicking or removing affected foliage can help alleviate small infestations. Use neem oil to smother these insects as well as their eggs.

Sooty mold commonly affects leaves in summer and autumn and is often caused by sucking insects like scale and aphids. Affected leaves will drop eventually.