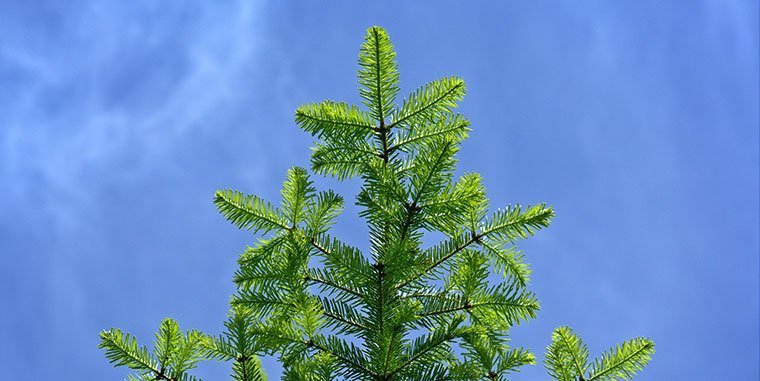 Picea pungens, or blue spruce, is indigenous to North America and was first discovered in 1862, becoming a popularly cultivated landscape tree and ornamental in many areas far from its native environment. It has been selected as the state of Colorado’s official tree.

This conical-shaped evergreen with thick horizontal branches often grows up to 75 feet high in the wild, but rarely exceeds 49 feet when growing in landscapes, parks, and gardens. The trunk is covered with scaly gray bark with yellow-brown branches, the leaves are waxy in texture and comprise blue-green prickly needles that grow on upward curving shoots and have a fresh, strong, pine-like smell. The pale brown cones grow about 4 inches long, male cones are usually found growing on the entire tree, while female ones are generally found on the upper areas of the tree. This helps assist in cross-pollinating from other trees.

The roots of seedlings are usually shallow and only penetrate about 2.5 inches into the soil in their first year while freezing generally can’t damage blue spruce much, frost can kill seedlings.

Blue spruce is slow to medium growers, growing about 12 – 24 inches annually, and is most widespread in Colorado and the Southwest of the US where annual average precipitation generally varies between 18 – 24 inches. While Blue spruce generally is thought to grow better with plenty of moisture, surprisingly it has been found to withstand drought much better than other types of spruce. It can also survive low temperatures of -40°F.

The pyramidal shape, color, and delightful smell make this plant an archetypal choice as a Christmas tree, while their branches are also used in different kinds of Christmas decorations such as wreaths to holiday garlands.

Planting blue spruce largely depends on the local climate, they can be cultivated throughout the year in mild climates. However, harsh winter climates require that they be planted from February to March or April when the tree is dormant, seeds/cuttings can be started in early fall if necessary, but planting in late fall won’t give the plant time enough to get established as they are vulnerable to injury and die-back in winter.

These trees can be planted as windbreaks, but are also effective when just planted ornamentally. They’re valued in deer country since their prickly needles and piney smell make them naturally deer-resistant. In the cold, snowy northern regions, these evergreens often add some color amidst the barren winter landscapes.

They thrive under full sunlight, so make sure they can get a minimum of 6 hours of sun every day.

Once the plant is established, it is largely drought-tolerant and can tolerate periods of less water, but it does better with moderate watering. In the first year, regularly water the plant to moisten the soil, reducing watering to just during dry spells once it has established itself. Avoid overwatering.

It can tolerate low to average humidity levels and can handle high humidity to a certain point although growth will be affected.

This plant is tolerant of cold weather. It can tolerate heat to a point. However, it will not do well in extremely hot and humid weather conditions. While it can withstand low temperatures of -40°F, it ideally prefers temperatures ranging from 39 – 72°F.

This plant does best in soil that doesn’t retain water and can adapt to varied types of soil, from acidic, alkaline, sandy, loamy, or clay.

An emerging and growing trend is for people to buy blue spruce trees in containers for Christmas and plant them outdoors in gardens and landscapes afterward. To keep your plant in containers for longer, select a pot 12 – 16 inches bigger than the roots of the plant. Care should be taken to prevent the plant from becoming root-bound.

Propagation in the wild generally involves seeds falling from cones and growing in the soil below, while planting seeds is the most usual way of propagation, new plants can also be had by rooting cuttings. Propagating from seeds involves either buying or harvesting seeds at the right time. Harvesting can take more time but is less costly than purchasing seeds. Seeds can be collected in mid-autumn. The seeds form in cones – collect the cones when they are young before they ripen.

Allow the cones to become dry until they release the seeds – this might take around two weeks. You might want to scarify the seeds to help them germinate but this isn’t really necessary. Insert the seeds in individual pots outdoors and water them until germination starts. Once they get established, they can be transplanted in to your garden or left to grow as potted plants.

Take cuttings at the end of summer or early fall. Select healthy shoots and snip off about 6-7 inch long cuttings. Cut the base at an angle and remove all needles from the lower two-third part of each cutting. Insert the cuttings deeply into sandy loam. Keep the soil moistened and wait for roots to start forming.

This plant does not need frequent feeding. Feeding in spring, before the growing season begins will give it a needed nutritional boost to increase needle length and color. Sprinkle 10-10-10 slow-releasing granulated fertilizer over the soil around the roots and water well to avoid fertilizer burn and to help dissolve the fertilizer.

These plants don’t need pruning unless you want denser foliage growth. Remove half of the new growth on the tips of branches every year in spring.

Dying foliage on potted plants is often due to under-watering or from the plant becoming root-bound. Repot the plant into a larger pot and make sure the plant gets sufficient water.

The two common pests that affect these plants are aphids and spruce gall adelgids. Aphids cause yellowish splotches on needles, which might have a sticky residue on them, while adelgids create cotton-like tufts on branches, they can be controlled/managed with horticultural oil.

Cytospora canker, a common and destructive fungal disease typically infects trees that are 15 – 20 years or older, causing the needles to become brown and drop. This is a disease induced by stress and can be managed by reducing stress-inducing problems by improving soil quality.