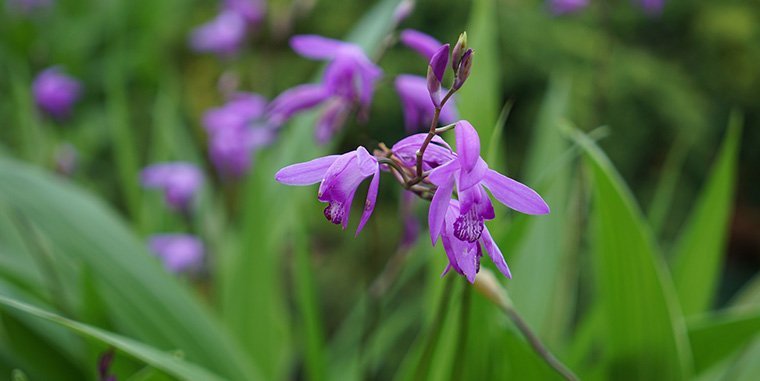 They are commonly found growing on grassy evergreen forests, coniferous forests, grassy slopes, and crevices at altitudes between 300 to 10,000 feet. The genus was named for Luis Blet, a botanist from Spain in the 1700s. The epithet, “striata”, means striped.

This perennial terrestrial orchid grows about 12 – 18 inches tall with a spread of 12 inches. Each pseudobulb usually produces 3 – 5 sword-shaped light green leaves about 12 inches long that emerge from the tubers and typically last for one year, dying down in winter and re-growing in spring, almost every new shoot has a flower stalk before leaves are fully developed, each stalk ultimately reaching 18-inch high.

Each shoot has about fourteen lavender or white flowers. The flowers are about 1.5 – 2 inches wide, scentless, and look like miniature Cattleya orchid flowers and appear in spring and summer. An established plant can produce dozens of flowering spikes in a season.

Pseudobulbs appear after the foliage dies down in fall and produces new growth in spring. The tubers are yellowish-white or grayish-white with brown roots and concentric rings. They are hard in hard texture and will not break easily.

It can become naturalized in time under appropriate growing conditions, spreading by rhizomatous growth.

This species is generally hardy, although some might need protection from brutal frost. It’s better to grow them in pots filled with well-draining soil to prevent water from sitting around the roots when they are not growing actively in winter.

They need very minimal watering when the growing season starts and new shoots emerge, resuming regular watering 4 weeks later after new roots start growing. B. striata has attractive leaves even when it isn’t flowering, unlike many tropical orchids.

The beautiful, fan-like pleated foliage looks similar to the young leaves of several species of palms.

Only one species, B. striata, is widely available in the horticultural trade where it is labeled as ‘Chinese Ground Orchid’ or ‘Hardy Orchid’. It is not expensive and is promoted as a hardy orchid for cultivating outdoor landscaping. This beautiful and hardy orchid was among the first orchids to be cultivated in England around 1794.

This plant is a nice addition to partially shaded areas of your garden in borders or rock gardens, with a reputation of being the easiest orchid for novices to grow.

This species grows in soil, unlike most other tropical tree-dwelling orchids. It grows in fairly temperate areas and requires no extra care to cultivate successfully. They can spread through their rhizomes and form beautiful clumps within a few years.

Other species and cultivars are available sometimes such as B. ochracea, a rather rare species with flowers of yellow sepals and red-marked white-lipped petals from China are slowly becoming more available for collectors to purchase.

This plant requires sunlight for almost the entire day to flower well, with some shade to avoid hot afternoon sunlight.

Watering this plant requires some care. The leaves drop off in fall and the plant undergoes a period of cool, dry rest with minimal to no watering to prevent the bulbs from rotting. Once new shoots emerge, the plant can be carefully watered.

However, once the flower stems appear, you can start watering the plant every week. After the flowering season ends, continue watering it as usual during the remainder of its growing season.

This plant thrives in humidity levels of 40 – 60%. Sustaining high humidity is not necessary with this orchid as with other tropical orchid species. Misting is also not needed except during very hot days if temperatures are more than 100°F.

It is hardy growing outdoors in gardens if the ground doesn’t get frozen. With mulching, this plant has been able to survive temperatures of -10°F.

This plant prefers a well-draining mix of 1 part compost, 1 part sand, and 2 parts peat with some granular fertilizer added that the soil can last for 3 – 4 years before needing to be refreshed. The soil should drain well yet stay moist and never water-logged as it doesn’t tolerate wet soil.

It is usually reported after 3 – 4 years or when it becomes overcrowded – whichever comes first. Repotting is best done in early fall when the leaves die down. Don’t delay repotting as pseudobulbs will start producing shoots under the surface in winter and repotting at this time might damage the new shoots.

It doesn’t appreciate being disturbed and might not flower properly in the first year after it is repotted, so handle the bulbs gently during this process. Select a suitable well-draining container around 9 – 10 inches in diameter. The bulbs should be placed about 2 – 4 inches under the soil. Use suitable well-draining soil and avoid breaking new roots when repotting.

Propagation is best done in fall after the foliage has died down. Dig the bulbs up and carefully break apart the bulbs into several sections without damaging new shoots or roots and replant them into individual containers filled with suitable soil.

This plant needs to be fed once every 3 weeks when it is actively growing. Use a high nitrogen mix in spring when new shoots emerge and switch to another fertilizer with a higher ratio of phosphorus and potassium when the flowers appear, stop feeding it when the foliage dies in late autumn. Alternatively, regular fertilizer or compost tea can also be used instead.

This plant needs to rest in winter when temperatures drop, stop fertilization and reduce watering after the foliage dies down. Mulch heavily in winter when the plant is growing outdoors or dig up the bulbs to store in a dry, frost-free spot and plant them in spring when there is no further threat from frost.

While no known pests or diseases have been observed, slugs and snails can be a problem occasionally. Use a slug repellent or scatter crushed eggshells or spent coffee grounds around the plant.