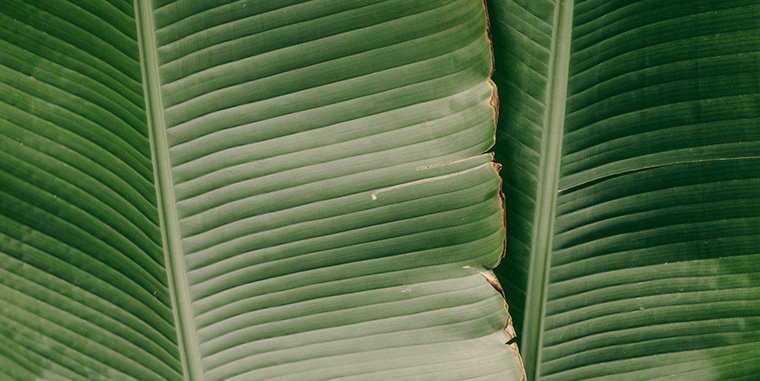 Musa or Banana belongs to the Musaceae family. The genus includes almost 70 species of flowering plants that produce edible bananas or plantains. It was first cultivated around 8000 BCE and is known to be the earliest example of plants domesticated by humans.

Most species are indigenous to the tropical zones of Southeast Asia and Australia but are now cultivated in 135 countries for their fruit as well as for fiber, and to make wine and beer. Several cultivars are grown as ornamental plants.

Historically, this plant was first acknowledged in “The Canon of Medicine”, an Arabic encyclopedia from the 11th century which was later translated to Latin and became widespread in Europe.

The fruit is called “Mauz” in Arabic, which was Latinized by Carl Linnaeus to Musa in 1753 to name the genus. The word “banana” describing the fruit in English came from the Portuguese and Spanish, who took it from Wolof, a language spoken in West Africa.

While these plants can grow like trees, reaching almost 30 feet high, these plants don’t have woody stems – their trunks or sheaths consist of the bases of their huge leaves.

An actual stem only grows from the leaf sheath when the plant gets ready to flower. The plant consists of an underground rhizome, the trunk, roots, and a large flower spike that eventually produces fruits.

While this plant reproduces from seed and suckers, plants grown from suckers are parthenocarpic or seedless. The average lifespan of these plants is about 6-7 years. However, after fruiting, the trunk will not flower again and is usually cut down.

Commonly, cultivators continue to propagate it from seeds or suckers so that fruit production can continue. Edible bananas have undergone a complicated cultivation process over time through mutation, hybridization, and selection by humans.

Banana and plantains rank fourth among food crops produced globally, only surpassed by staple grain crops of maize, wheat, and rice. In 2017, India and China led the world in producing bananas, accounting for around 38% of the total production.

The flowers, fruits, and roots are utilized in several cultures as folk medicine in Asia, Africa, and the Americas. Modern studies have found an assortment of bioactive compounds in these plants.

This article will focus mainly on ornamental banana plants since their size makes them appropriate to be grown in containers. Although there are a few ornamental plants that produce small edible bananas, most fruit produced is inedible.

Species that are usually grown for the ornamental purpose include:

is cultivated for its ornamental leaves that are about 6-10 inches long. It produces slender fruits on bunches with each fruit around 1 inch wide by 3.5 inches long.

is commonly called the flowering banana. This plant is mainly grown as an ornamental and its fruit is not usually eaten.

is a popular commercial cultivar with a mature height of 8-10 feet. The leaves reach 4 feet long and the thin-skinned edible fruits are about 5-10 inches long and can bear up to 90 fruits.

Or Blood banana can reach 6 feet tall, although underfeeding can limit its height to 3 feet. It produces small sweet bananas that are around 2-2.5 inches long

Was recently discovered in 2005 in Thailand. This plant grows around 8 feet-tall russet-colored leaves with splashes of lime green. This plant doesn’t flower readily and its fruit is inedible and heavily seeded.

Is a cold-hardy fiber plant with leaves that grow 6 feet long, 2 feet wide with a stem about 12 inches wide. It produces cream-gold flowers in summer and tiny inedible bananas that mainly contain seeds. This plant can tolerate cold among all the ornamental banana plant species and can grow back even when the stem dies during winter.

As its name suggests comes from the Chinese mountains. This plant grows around 5-6 feet high and produces dark green 3-4 feet long leaves and 8-inch yellow flowers that look like artichokes. It dies after it flowers in summer, but the roots produce new sprouts.

Originates from India and grows about 5-7 feet tall and has 3-feet long leaves. Its leaves are colored green on the surface and bronze underneath. It produces vertical pink bracts and orange flowers that become attractive clusters of velvety pink small inedible bananas.

As a rule, when cultivating ornamental banana plants indoors or on patios, large heavy-duty containers are required to support the weight and size of the plants.

Most types of these plants prefer growing in full sun, needing at least 6 hours in direct sunlight. However, some varieties tend to easily scorch and will thrive better under partial shade.

These plants originate from rainforests, hence they require plenty of water and humidity. They grow better when planted in clusters close together, as this helps them retain moisture in their leaves.

Potted plants tend to need more watering as they can drink faster than when grown outdoors in the ground. Water them regularly and deeply every 2-3 days during the warm months to ensure the soil stays evenly damp but not sodden. Avoid overwatering them as this will cause root rot.

It thrives best under warm and humid conditions. Humidity levels of 50% or more are preferable as dry air will cause damage to the leaves. Misting the leaves daily will help increase humidity levels.

While there are a few relatively hardy and cold-tolerant species, most species prefer constant temperatures between 75-95°F. Arid conditions and cold temperatures can quickly kill the plants. These plants don’t tolerate temperature extremes.

Banana plants thrive when grown in organically rich soil with decent drainage capacity with a soil with a slightly acidic pH.

Ornamental banana plants can be grown in large 15-gallon or more containers with good drainage capacity and good organically rich soil. When repotting this plant, you also have to divide and separate suckers from the plant every 2-3 years. Water the plant deeply when you’re done repotting.

When propagating the plant from seeds, the seeds must be soaked for a day in warm water. The seeds are then sown in fine compost and kept under a constant temperature of 68-75°F in full natural light. Seeds typically germinate around 6 months.

Propagation from suckers is easier and faster. First, water the plant a day before, making digging easier and helping it recover faster. Select a sucker or pup that is at least 12 inches tall that has developed its roots to help it survive after separation from the mother.

Use a trowel or small spade to dig around the pup until the point where it connects to the mother. Separate it and pull it up along with its roots. Now plant your pup into well-draining soil and water it thoroughly, keep it under constant temperatures between 68-75°F in full light and wait for it to adapt to its new home.

These plants are heavy feeders, feed them regularly with balanced fertilizer throughout their growing season. Additionally, remove some soil every year and replace it with rich compost to increase the organic matter in the soil.

Yellow or dying leaves can be removed at any time to boost better growth and prevent them from taking away nutrients from the plant, particularly if you’re growing them as decorative ornamentals. However, if you’re growing them for fruit, they should only be pruned after harvesting the fruit. Pruning before this will affect fruit production and might decrease the yield.

Don’t cut or damage the stem as it can affect growth. Once the fruit has been harvested, the fruit stalk must be cut back 30 inches and the stub removed when it dries.

Once a stalk bears fruit it will not fruit again. Allow a sucker to grow and cut back the older stalk to continue growing and produce fruit. The cut stalk can be chopped up and utilized as mulch.

Pests that affect these plants include aphids that can cause shriveled or curled leaves and potentially transmit diseases that can affect the plants. Remove them with strong sprays of water or with insecticidal soap.

Another pest is the black weevil that damages the plant causing jelly-like sap to ooze from the plant. These can be removed and eliminated by pesticides.

Insects like mealybugs along with red spider mites can also plague the plants. If it is a minor attack, these pests can be manually removed using your fingers or with rubbing alcohol. Suitable insecticides can also be utilized to remove and eliminate them when the infestation is bad.

When the plant gets affected by direct frost, there’s a good chance for its leaves to become yellow. Prune and remove any yellow leaves.

These plants need regular watering, particularly potted plants to help them thrive. If they are under-watered, the leaves will change color. Similarly, over-watering the plants cause root rot so keep a close watch on your watering habits.