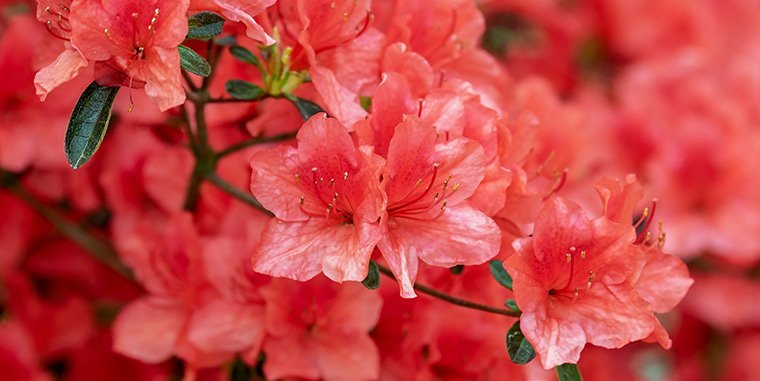 Azaleas are a huge group of plants from the Rhododendron genus and belong to the Ericaceae family. Azaleas are usually slow-growing plants and indigenous to Asia, North America, and Europe. They are widespread and have been cultivated in Asia for hundreds of years. The first azaleas in the US were cultivated in South Carolina in the 1800s.

Currently, there are about 10,000+ different cultivars grouped under the evergreen or deciduous types. Most of the azaleas indigenous to the US are deciduous (their leaves drop in fall), with flower colors varying from white, pink, purple, red, orange, and yellow.

Evergreen azaleas, native mainly to Japan, produce flowers in colors varying from white and different shades of purple, red, red-orange, and pink, but not yellow, with patterns (often on one plant) of single colors, bi-colors, stripes, and flecks. These flowering shrubs can grow to 6 feet tall in some varieties. With proper care, some plants can live for almost 50 years.

Azaleas generally start flowering in spring, with their blooms often lasting for several weeks. Many places and countries (Japan, Korea, Hong Kong, and the United States) have popular flower festivals when the plants start blooming, attracting thousands of visitors. Azaleas, like Magnolias, have become synonymous with the Southern states of the US because they thrive in the most acidic soil in most areas there.

The tolerance of azaleas to lighting conditions varies by type. Generally, most types prefer to grow under partial sunlight or shade beneath trees, too much sun exposure will bleach/burn the leaves, while too much shade results in gangly plants that won’t bloom.

Moisture is the greatest concern in caring for indoor azaleas. Their foliage can absorb water so they should be watered by the overhead method to evenly drench the foliage and roots. This should be done during the morning to dry the leaves by the afternoon to prevent fungal disease.

Azaleas grown indoors will enjoy an occasional dunk in a large container of water. Take it out when bubbles stop and give the pot a chance to drain. They can be watered once a week in temperate areas and three to four times a week in dry and hot areas.

Azaleas prefer high humidity. Raise the humidity with a humidifier or place a water-filled tray nearby. Do not mist as they are vulnerable to fungus. Avoid placing them close to hot/cold vents to avoid drafts.

Regardless of whether the plant is grown outdoors or indoors, the plant can be exposed to temperature ranges between 0-90°F. When it is growing actively or in bloom, the temperature must certainly be above 32°F.

They thrive in acidic, well-drained, and organically rich soil that shouldn’t be too dry or remain mushy, a clayey soil will make conditions too wet, resulting in root rot that will make the foliage wilt and turn yellow, killing the plant.

Soil that is alkaline and high with lime is another issue as insufficient iron will result in chlorosis (yellowed with green veins), although azalea cultivators living in such locales have found a solution to counter this. They construct raised beds filled with a mixture of bark and moss, mixed with 3 parts of garden sulfur and 1 part of iron sulfate to maintain soil pH levels.

Inspect the roots of potted plants every 6 months and report when the roots are crowded. Young azaleas should be repotted yearly, extended to 2-4 years for older plants.

Use a container 2-4 inches bigger with several drainages and fill it with specially formulated soil for azaleas, or a mix of equal parts of fine pine bark and potting soil. Place the azalea in the pot after making a hole for the root ball and level the soil. Water it well, adding more soil if necessary, until the level of the soil is at the same height as it previously was.

The two methods for propagating azaleas are stem cuttings and seeds. Plants grown from seeds from hybrid crosses of two different plants can turn out like either a parent plant or a mixture of both.

Cloning the plant from cuttings is best if you want the new plant to look the same as the parent plant. Rooting stem cuttings isn’t hard if you are using semi-hardened cuttings – the cutting should be between soft and hard, being able to bend, but not easily. This happens once the leaves on the stem are mature.

Select a healthy and vigorous parent plant, first watering the plant a few days before taking a cutting to ensure the plant isn’t water-stressed. Remove the tips of branches, taking cuttings around 5 inches long below leaf nodes.

Use new containers with plenty of drain holes and filled with suitable soil to root the cuttings. Wet the soil first before you fill the containers. Retain around 2-3 leaves at the tip and remove the remainder, including any flower buds.

Insert cutting in the soil and water well, place the containers under bright light and keep watering the cuttings regularly. The cuttings will grow roots within 2 months, transplant the cuttings after eight weeks to individual pots, or plant them outdoors in spring.

If you mix organic compost into well-draining soil, this might be all the fertilizer that’s required. Fertilizer, if needed, should only be added if the plant shows any sign of lack of nutrients or growth has slowed down and don’t fertilize it when the plant is flowering.

Prune when the flowers die before new buds appear. Azaleas are not suited for styling into straight edges or box-shapes as they will result in uneven flowering and splotchy foliage growth. Try to avoid cutting any branch by less than a third. If you can revive a plant with sparse or spindly growth by cutting back 3-5 large branches by about half their length. New branches will grow below the cuts and your plant will soon be healthy and looking wonderful.

Azalea leaf gall is very destructive to the plant, particularly during early spring removing infected leaves by hand is the best way to rid the plant of the infection.

Growing outdoors under the direct sun are very often infested by lace bugs, a kind of sucking insect. The simplest way to get rid of them is by spraying them off with water this will wash away nymphs from the plant and can’t return.

Signs of nutritional deficiency show up as smaller or yellow leaves or leaf drop or stunted growth. If the branch tips start dying and the leaves become dark, this could be due to phosphorus deficiency as these symptoms could be caused by other issues such as compacted soil, get the soil tested to check if it lacks nutrients. If this is the cause, fertilizing the plant will help, but it won’t resolve any other problems. If the soil is compacted, repot the plant with fresh soil while freeing up any tangled roots.