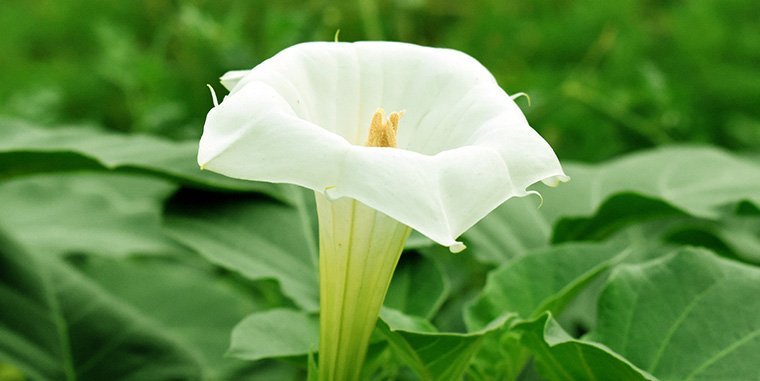 Brugmansia or Angel trumpet consists of seven flowering species of plants native to tropical South America and the genus belongs in the Solanaceae nightshade family. They are now invasively naturalized in tropical Africa, Australia, Asia, and North America.

These woody trees or small shrubs, with their hanging fragrant flowers, are cultivated as ornamentals in containers and gardens. Their common name is sometimes used to describe their closely related Datura genus. However, Datura plants are herbaceous perennials, bearing erect flowers and spiny fruit, unlike Brugmansia whose fruits aren’t spiny.

These plants were first classified as belonging to the Datura genus by Linnaeus in 1753. However, C. H. Persoon, in 1805, classified the plants into the Brugmansia genus, after Sebald Justinus Brugmans, a Dutch naturalist.

This species of plants are considered to be very toxic with delirium-inducing compounds similar to the deadly nightshade and jimsonweed.

These plants can attain 10–36 feet in height. The generally large leaves are 4–12 inches long and 2–7 inches wide, with toothed edges and often coated with fine hair. Their common name, “angel’s trumpet”, describes their large, drooping, trumpet-shaped flowers that are 6–20 inches in length and 4–14 inches wide at the opening.

They come in hues of white, pink, yellow, orange, red, or green. Most produce a strong, pleasant fragrance in the evening the flowers can be single or double or more. They begin flowering in spring in warm weather until fall, sometimes continuing until early winter in warmer conditions. Several hybrids and cultivars have been cultivated as ornamentals, including some variegated types.

They have two stages in their life cycle. In the initial stage, young seedlings grow straight up, usually on a single stalk, until reaching the first main fork at 2.6–4.9 feet high. They will not flower before reaching this fork and only bloom above the fork. Oddly enough, cuttings taken before this fork will also follow this behavior before flowering, while cuttings taken from the upper flowering area often flower at lower heights.

Currently, the seven recognized species are divided into two genetically isolated groups. The warm group includes the Versicolor, sauveolens, insignis, and aurea species, while the cold group consists of the vulcanicola, sanguinea, and arborea species.

Most species become fragrant during the evenings to draw pollinating moths. One species that doesn’t produce fragrance, the red-flowered B. sanguinea, attracts long-billed hummingbirds to pollinate it. An interesting example of insect/plant interaction involves the Placidula euryanassa butterfly, which utilizes B. suaveolens as larval food, isolating the tropane alkaloids of the plant and storing them through their pupal stage on to the adult stage, using the alkaloids as defense from predators.

The species have been used in several South American native cultures for traditional medical preparations and spiritual and religious ceremonies.

Generally, these plants do well with full sun. However, in particularly hot or arid environments, a bit of shade during the afternoon is appreciated. Aim to provide the plants with six or eight hours of daily sunlight for them to thrive. If that is difficult to achieve, use grow lights for a minimum of 8 hours.

These plants need to be well-watered frequently. If you’re growing the plants in pots, ensure there are sufficient drainage holes to prevent waterlogging. Root rot can befall the plants if the soil becomes oversaturated. This also depends on the climate and where the plants are growing e.g. containers or in the ground.

They need extra watering in high temperatures and low humidity, while potted plants might need watering twice a day in the same conditions. However, only water about once in a month when they become dormant in winter – they may lose leaves and appear dead, but they are alive when their trunks are green. When spring approaches, about a month before reintroducing the plants outdoors, slowly increase watering to once a week, bringing the soil to a visual state of dryness before watering again.

Generally, these plants can tolerate moderate to warmer temperatures but shouldn’t be kept outdoors when temperatures drop below 40°F. Keep the plants at constant temperatures between 60-80°F for optimum growth.

If you’re living in environments where autumn and winter get very cold, plant them in containers that can be relocated to a frost-free, dark garage or similar place before the predicted first frost happens. They can go dormant and reemerge in spring.

These plants are not picky about soil and can happily thrive in almost any type, from rich organic compost, sand, clay, or loam as long as the soil has good drainage capacity. While they don’t like to become water-logged, they need moist soil, so you have to delicately balance both. If growing in containers, they will thrive in a soil mix designed for camellias and azaleas.

They can thrive in containers and are best cultivated that way if you’re living in temperate areas with very cold winters since you can bring them inside when temperatures go lower than 50°F. Plant them in 24-inch diameter containers. They will not be as tall when they grow in containers, typically just about 12 feet, and kept at that size or less with pruning. Untangle and prune damaged or dead roots, they can be slowly repotted in time as they reach their final container around 20 gallons in size.

They are propagated from cuttings and seeds. Springtime mornings are best to take cuttings as you get plants that mature faster than from planting seeds.

Wearing gloves, take a 10-inch long stem cutting just 1/4-inch below the leaves, stripping off the last set of leaves to expose the nodes. Bury the end in damp potting soil, firmly pressing the soil to hold the cutting up. Keep the pot in a slightly shaded spot and continue watering the plant. The cutting will produce good roots after a few weeks and is ready to transplant into your garden or a larger container.

Lay the seeds on the moistened potting mix and cover with soil. Keep the soil lightly dampened and place the container in a warm room. Germination might take two weeks to a few months, but most seeds will sprout within a month.

These plants should be fertilized once a week at least, while larger ones can be fed twice or thrice a week. Water-soluble fertilizer, particularly formulas meant for flowering plants, is better since these plants need rapid-acting fertilizers to grow.

Pruning will keep the plants constantly blooming, prune older stems and lateral branches keeping six or 10 nodes on branches to make the plant bushy. Prune when flowering is finished. Since they are rapid growers, they need hard pruning periodically, which won’t harm them. The plants will take a month before they start flowering again after pruning

When growing these plants indoors, they can easily be trained to grow to a smaller shrub. Pruning them down to a suitable height won’t affect the frequency or size of the blooms. They can be trimmed down by 1/3 without harming the plant if and when they become dormant in winter.

Whiteflies, cabbage worms, slugs, spider mites, mealybugs, fungus gnats, and aphids are the pests that commonly plague these plants. They can be treated with a spray of equal parts of rubbing alcohol or insecticidal soap and water.

Tomato spotted wilt and mosaic virus are two viruses that affect these. They both cause stunted growth and streaking or blotches. Although the plants might survive and recover with proper care, these viruses can’t be cured and are permanent.

Verticillium and fusarium are two fungi that infect the roots and move up the stems, preventing the plants from getting water and making leaves wilt. While verticillium commonly attacks in cooler temperatures, fusarium usually attacks in warm weather. There isn’t any cure for these diseases and these fungi can survive a long time in the soil. The only solution is to propagate new plants in fresh soil.

Root rot – this fungal disease is always caused by over-watering and can be avoided by keeping the plant well-watered but never saturating the soil. Reduce watering when temperatures cool down. It can be deadly if not caught early enough. Remove the affected plant from its container and cut away mushy or rotten roots. Repot in a sterilized container filled with fresh soil.