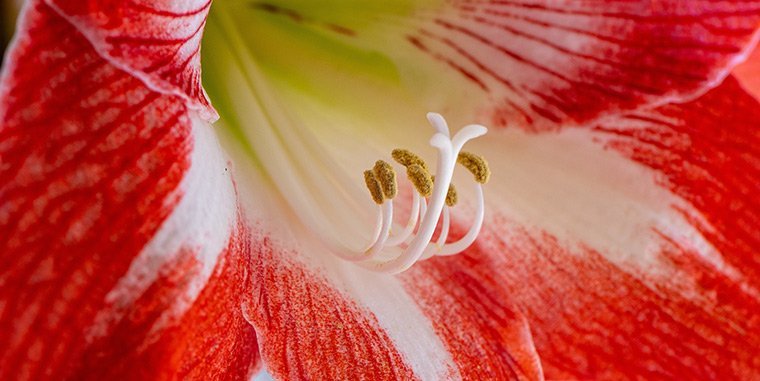 Amaryllis is the sole genus in the Amaryllidinae subtribe and is indigenous to Africa and South America. The bulbs of this plant were first introduced in Europe sometime in the late 1700s and can produce blooms for more than 75 years. This genus has just two main species, A. belladonna native to Africa and A. Hippeastrum from South America, although Amaryllis belladonna is better known.

Amaryllis is a bulb plant, each bulb being 2–4 inches in width. It has several green leaves, 0.79–1.18 inches wide and 12–20 inches long, growing in two rows. Each bulb can produce one or two erect stems 12–24 inches tall, and bears a clump of 2-12 tube-shaped flowers at the top.

Each flower measures 2.4–3.9 inches wide and is usually colored white with crimson or pink or purple veins. The flowers are usually pollinated by carpenter bees along with other insects and moths at night.

It can be forced to flower at specific times, like Thanksgiving or Christmas, by counting backward around 10-12 weeks, to decide when watering should stop. To prepare for this, clip the flower stalk after flowering is done, but let the plant continue growing.

Keep watering so the soil is damp, but not wet. Stop fertilizing the plant in August, move it to a cool dry spot around 55-60oF and stop watering based on when you want it to flower. The leaves will be dying back at this time. The lack of water and leaves will force the plant to start flowering again. Resume watering at this time and move the plant to a warm, sunny spot.

It can reproduce slowly either by bulb division or by seeds, it has slowly become naturalized after being planted in suburban and urban locales at low elevations and the coastal areas along the US west coast since these habitats are similar to their natural South African environment. It is well established in Australia and introduced to several other areas of the world, together with Great Britain and New Zealand.

While the plant isn’t frost-tolerant, it won’t do well when grown in tropical environments since it requires a dry period between producing leaves and producing flower stalks.

This plant requires 6+ hours of sunlight every day and prefers a shaded area with bright indirect sunlight. Insufficient light will result in no flower stalks being produced.

Keep rotating the pot to provide even exposure to light so the stalk will grow straight.

It prefers a temperature of around 70oF. Once it flowers, it can tolerate cooler temperatures about 50-60oF but it will not flower if it grows under this temperature range as flowering will be inhibited.

It will thrive in rich well-drained soil outdoors. When growing it indoors, it prefers a good-quality, well-drained mix of sand and loam.

Once the leaves have died and new growth is emerging, it is time to repot. Dig the bulb out and shake it free of soil. Rinse the bulbs and separate the individual bulbs, removing any leaves or stalks that remain.

Inspect each bulb for mold or insects and discard affected bulbs. Use a 6-8″ heavy pot because a lightweight pot may fall over from the weight of the plant. The container must be two times bigger than the bulb with sufficient drainage holes to reduce the danger of root rot.

Fill the container halfway with soil rich in organic matter and plant the bulb, pointy ends up and covers two-thirds of the bulb with soil.

This plant can also be propagated by seeds. However, this is not usually preferred since it is time-consuming, needing 3-5 years for flowering to start.

The preferred method is to propagate it from bulbs while repotting, as discussed above.

This plant prefers nutritious soil supplemented by feeding it two times a month with a fertilizer slightly higher in phosphorus to boost flower production. Nitrogen generally promotes more leaf growth and fewer flowers. Fertilize it from spring for at least 5-6 months, allowing for good growth and flowering.

The plant is not flowering

The technique to use here is to remove the bulb and cut all the foliage off to about an inch above the bulb. Wash the bulb, letting it dry for a week. Then wrap it in sheets of newspaper and place it in the vegetable compartment of your refrigerator for two months, rewrapping it if the paper gets wet.

After two months are done, remove the bulb and cut away any dead/dry roots, leaving just the fresh ones. Place the bulb on the rim of a small water-filled jar – only the roots should sit in the water, not the bulb. After 3 days, transplant the bulb into suitable soil, and your plant will start producing flowers again. Also, ensure the fertilizer used has a higher content of phosphorus.

Stunted growth could be due to several issues such as insufficient sunlight, cold temperatures, or dry soil. Under-watering, over-watering, diseases, pests, and over-fertilization can also contribute to this problem.

Sometimes, narcissus bulb flies may lay eggs in the bulbs of plants growing outdoors. The larvae feast on the bulb, eventually eating their way inside. The leaves of infected plants might become yellow, start wilting, and can be fatal for the plant, because controlling them with insecticides is usually ineffective and difficult, it is better to destroy any infected bulbs when the problem is identified.

Poor drainage or soil that is constantly water-logged might attract fungus gnats. Follow the watering guidelines to avoid over-watering.

Red blotch is due to a fungal infection that affects both the health and appearance of the plants. Proper care as well as proper inspection of the bulbs and soil will prevent this disease. However, this disease isn’t generally lethal to the plant and can be treated with a systemic fungicide.